Virtually all summer rainstorms are accompanied by thunder and lightning. No other part of the nation has more thunderstorm activity than Florida. In the western half of the peninsula in a typical year, there are over 80 days with thunder and lightning. Central Florida's frequency of summer thunderstorms equals that of the world's maximum thunderstorm areas: Lake Victoria region of equatorial Africa and the middle of the Amazon basin. The Amazon and east African areas maintain their frequency of thunderstorm activity throughout most of the year, whereas the number of thunderstorms in Florida drops off sharply in the fall and does not pick back up until spring.

The simplest definition of a thunderstorm is a local storm that produces lightning and thunder. The storm itself can either be a single cumulonimbus cloud, a cluster of several thunderstorms, or a line of thunderstorms. In order for thunderstorms to form, there needs to be:

Once all of these components are brought together, the thunderstorm then goes through a 3-stage life cycle:

Development or Cumulus Stage: A cumulus cloud forms and begins to grow vertical, usually above 20,000 ft. Usually, little, if any, rain occurs during this stage. There might be occasional lightning. 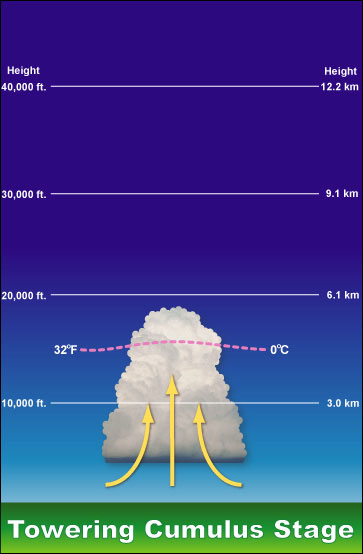 Mature Stage: The cloud has grown in considerable height, now in the range to 40,000 to 60,000 ft. Strong updrafts and downdrafts coexist within the storm. This is the most dangerous stage of the storm and is the most likely time for hail, heavy rain, lightning, strong winds and tornadoes. Storms occasionally have a black or dark green appearance. 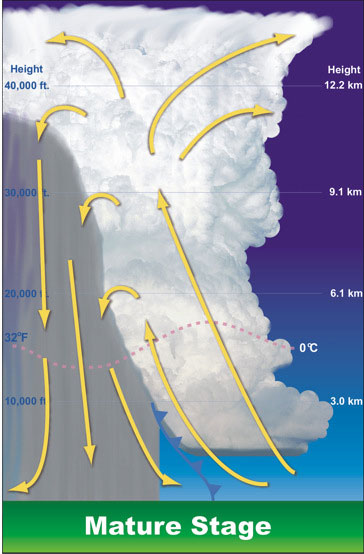 Dissipating Stage: The downdraft cuts off the updraft, which cuts off the supply of warm moist air to the storm and therefore, it dissipates. Rainfall decreases in intensity, along with winds, though strong gusts are still possible. Usually, the anvil top of the cloud is all that remains of the initial cumulus cloud. 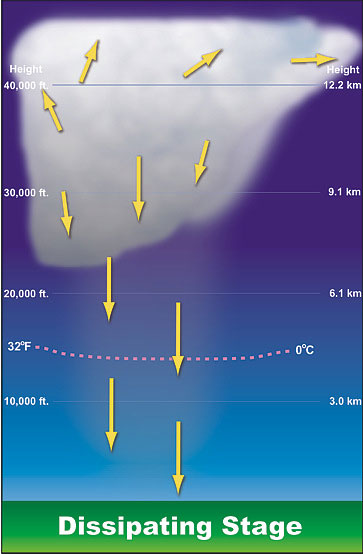 As the difference in the charge continues to increase, positively charged particles will rise up in taller objects, such as trees, telephone poles, and even buildings. A channel of negative charge, called a stepped ladder, will descend from the bottom of the storm cloud toward the ground. This is invisible to the human eye.

The positive charge that has collected in the tall object on the ground 'reaches' out to the approaching negative charge with its own channel, called a streamer. When these channels connect, the resulting electrical transfer is what we see as lightning. If enough of the charger is leftover, additional strokes will use the same channel and give the bolt the appearance of flickering. Lightning heats up the air to 50,000 degrees Fahrenheit, and this rapid heating of the air produces a shockwave that results in thunder.