Mean temperatures in September were above normal statewide. The anomalies in the northern and west-central parts of the state were the greatest (Table 1 and Appendix 1). Continuing a long-term trend, anomalies in monthly mean minimum temperature were more positive than anomalies in monthly mean maximum temperatures. September 2018 was the warmest on record at Gainesville, Daytona Beach, Tampa, Melbourne, and Key West, as well as other less major stations, and in the top five warmest on record at several other stations. Several high temperature records were tied or broken across the state (Appendix 2).

Rainfall totals in September were below normal except in the far southern part of the state, in the Tampa Bay area, and on much of the panhandle (Figure 1). The third-wettest September on record was registered at Pensacola, and Daytona Beach and Melbourne both had the second-driest September on record, with several other stations in the eastern half of the peninsula in the top 10 driest Septembers on record. Two 24-hour precipitation records were broken for the month (Table 3).

Figure 1. A graphical depiction of the monthly rainfall departure from normal (inches) for September is given in the figure below (courtesy of NOAA, NWS). 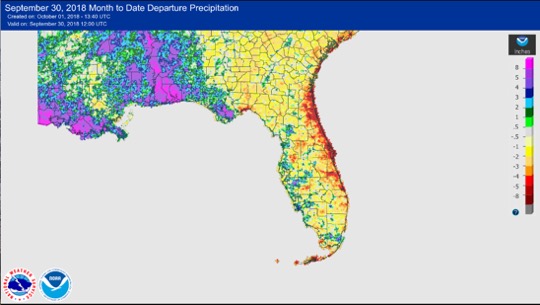 According the Local Storm Reports (LSRs) issued by the local National Weather Service (NWS) offices serving Florida, 143 instances of hazardous weather were reported across the state in September 2018.

Table 4. Breakdown of storm reports submitted in Florida during the month of September. (Compiled from Iowa State University/Iowa Environmental Mesonet.)

At the end of September, according to the U.S. Drought Monitor, all of Florida was drought-free, continuing conditions that have been present since the late spring. Rainfall deficits that had accumulated on the far western panhandle were eliminated by heavy rains from Tropical Storm Dennis at the beginning of the month.

As of 1 October, the Lake Okeechobee water level was at 14.53 ft. above sea level, which is above average for this time of the year. 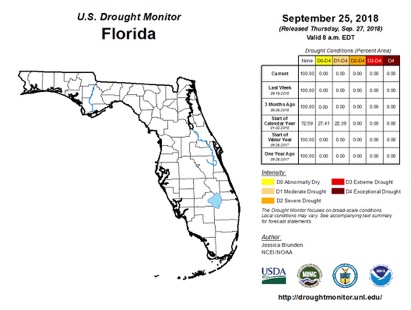 At the start of the month, Tropical Storm Gordon moved from just south of the Florida peninsula through the eastern Gulf of Mexico to a landfall point on the Mississippi coast. Heavy rainfall and strong winds were observed on the far western panhandle; agricultural impacts from this storm were fairly limited, although some cotton was reported blown down or twisted in Okaloosa County. Otherwise, the historically frequently wet conditions of summer gave way to drier conditions in most areas through the month, allowing for seasonal activities to progress with less hindrance. By month’s end, the peanut and hay harvest, slowed by wet conditions early in the month, was moving fast. As well, the harvest of avocado, bitter melon, boniato, malanga, and okra were underway. The planting of beans, bitter melon, boniato, carrots, leafy greens, malanga, okra, peppers, radishes, snap beans, sweet corn, and tomatoes was in progress.

*This value breaks the all-time highest minimum temperature ever recorded at Gainesville for the month of September (records back to 1890), last set on 16 September 2004.

**This value breaks the all-time highest minimum temperature ever recorded at Tampa for the month of September (records back to 1890), last set on 15 September 2018 and before that on 11 September 2015.