Rainfall totals in September were varied across the state. Rainfall totals were above normal for portions of the state affected by TS/Hurricane Hermine in the first two days of the month, and below normal for most of the remaining area. Two-day storm totals in excess of 9’’ were measured by several gauges in Pinellas County. Major reporting stations registered departures from normal ranging from -3.83” (Jacksonville) to +6.53” (Melbourne) (Table 2 and Appendix 1), although localized parts of the state saw rainfall totals that were as much as 5” below normal to over 8” above normal (Figure 1). At major reporting stations, there were a few number of 24-hour precipitation records broken for the month (Table 3). 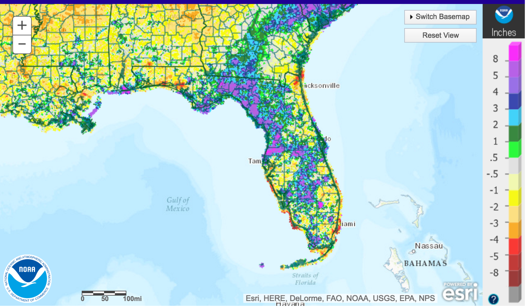 The ENSO alert status is currently set to Not Active. Sea surface temperatures in the east-central and equatorial Pacific are near or below average. NOAA CPC estimates that continuing ENSO-neutral conditions are slightly favored (55-60% chance) for the fall and winter of 2016-17.

There were 359 reports of hazardous weather events logged in Florida in September by the Southeast Regional Climate Center (http://sercc.com/lsr; see Table 4 for a breakdown by event type). Nearly half of these came from just two days, September 1-2, during the approach and passage of Hurricane Hermine. Hurricane Hermine made landfall around 1:30 AM EDT on 2 September 2016, near Saint Marks, Wakulla County, in the Big Bend region. Its greatest impact away from the coast was damaging wind gusts. Winds were strong near, and especially off, the western coast from the Tampa Bay region northward through the Nature Coast and the north-central part of the peninsula and into the Big Bend region. Damage from these wind gusts, though seen in much of the Big Bend, was most evident in Tallahassee, the largest population center affected by Hermine at its peak strength. Numerous downed trees caused several injuries and damage to several houses and numerous power lines. The resulting power outages left over 300, 000 customers without power for several days. Rainfall from Hermine was particularly heavy in coastal areas of the Tampa Bay region, where minor to moderate flash flooding was reported. Three brief tornadoes were reported in rural Taylor County on the 1st  without significant associated damage. A weak tornado on the same day briefly touched down in Orange County causing some damage to homes and structures. Initial estimates indicate that insured losses in Florida from Hermine were on the order of $80 million. 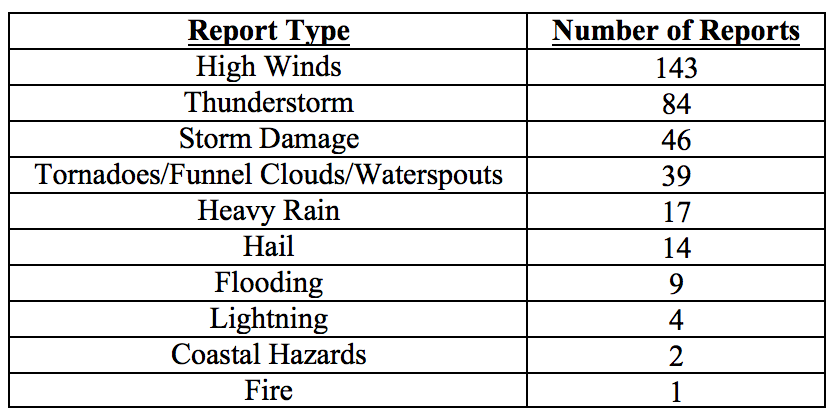 Prior to the beginning of September, topsoil moisture levels were mainly (62%) adequate, with some (20%) surplus and some (16%) short values present. Following the passage of Hermine, soil moisture levels shifted to mostly adequate (60%) and (30%) surplus. By the end of the month 70% of topsoils were reported at adequate levels, and 18% with surplus, and 12% short. Land preparation and planting has been underway for fall vegetables. Some of the early vegetable plantings have suffered from disease issues because of overly wet soil conditions in Charlotte, Collier, Glades, and Hendry Counties. Cattle and pasture conditions are mostly good, and pasture conditions are seasonally declining across the state. Peanut harvesting has begun in Lafayette, Dixie, and Escambia counties, although wet fields caused some crop damage and harvest delays and increased disease pressure in Dixie and Levy Counties. Some damage from wind and excess moisture following the hurricane has been reported in cotton and sorghum fields in Jefferson County and hay fields in Pasco County. Sugarcane is reported to be in good condition, although some growers in Collier, Glades and Hendry counties had to run pumps to remove excess water from the fields. Most of the citrus growing region, with the exception of portions of Orange, Seminole, Brevard and Volusia has been drought free for most of the month. Some groves required irrigation several times per week to maintain necessary soil moistures. Harvest has begun for small amounts of citrus varieties and is expected to continue as fruits continue to ripen.

According to the US Drought Monitor, at the end of August 86% of the state was drought-free, with the remaining 14% (including Nassau, Duval, Clay, Saint Johns, Putnam, Flagler, Volusia, Brevard, and portions of Madison, Lake, Seminole, Orange, Osceola, Indian River and Okeechobee Counties) experiencing abnormally dry (D0) conditions. In the first week of September, rains from Hermine ameliorated some of the D0 conditions, leaving only 6% of the state (portions of Nassau, Duval, Saint Johns, Putnam, Seminole, Orange and Brevard Counties, as well as most of Volusia County) in D0. In the week that followed, some additional D0 conditions developed in the northern portion of Okaloosa and Walton Counties, and in the northeast of Jackson County. This pattern persisted until the last week of the month. As of the latest US Drought Monitor report (September 27th), 93% of the state was drought free, and 7% - abnormally dry.  As of October 1, the water level in Lake Okeechobee was at 15.77’, which is 0.86’ higher than average for this time of the year. 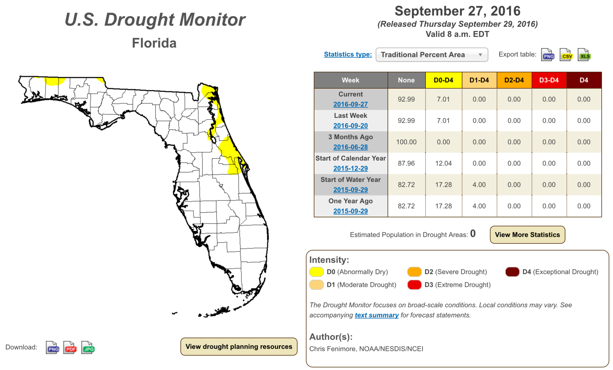 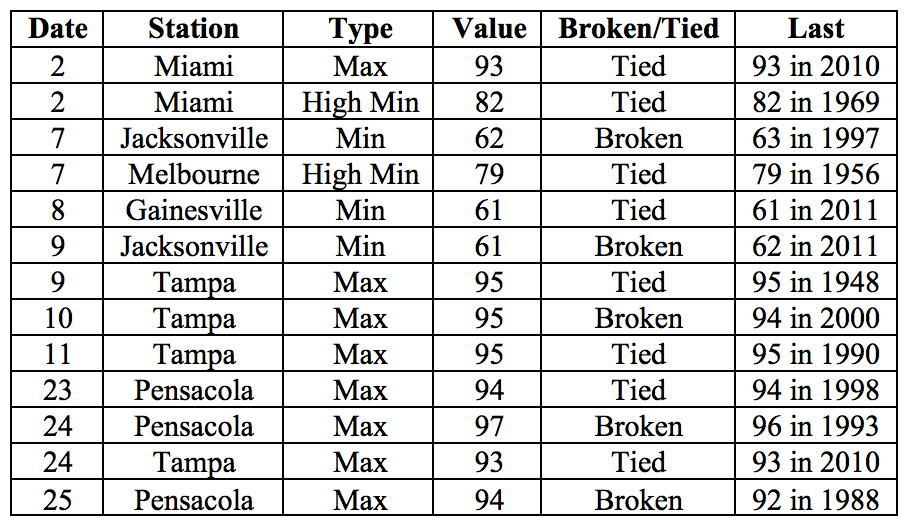