Rainfall totals were varied across the state in September. Portions of the western Florida Panhandle and South Florida reported above normal rainfall for the month, while the Big Bend and parts of the Peninsula observed below normal rainfall totals (Figure 1). Departures from normal roughly ranged from -2.42” to 1.67” (Table 2 and Appendix 1), though localized parts of the state saw rainfall totals that were as much as 5.00” below normal to 8.00” above normal (Figure 1). September 2015 was the 7th wettest in Miami and the 10th wettest in Naples. There were multiple 24-hour precipitation records broken for the month (Table 3). 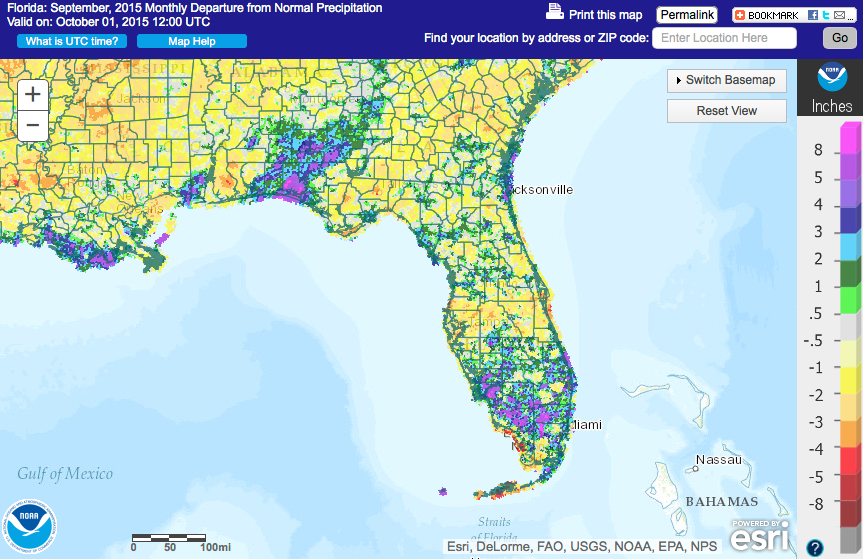 El Niño Conditions are Present in the Pacific.
Based on current data and forecast models, the Climate Prediction Center (CPC) will keep the ENSO Alert System at an El Niño Advisory. El Niño conditions are present, and positive equatorial sea surface temperatures (SST) anomalies continue across most of the Pacific Ocean. There is approximately a 95% chance that El Niño conditions will continue through the Northern Hemisphere winter 2015-2016, and gradually weaken through spring 2016. CPC predicts above normal temperatures and precipitation across the state through December 2015.

Hazardous Weather Events in September.
There were a total of 267 severe weather reports made in Florida during September. On September 2nd, lightning struck an elementary school in Duval County, FL. The school was evacuated after smoke from a damaged AC unit filtered into the building. Lightning, associated with a strong thunderstorm, caused power outages in Chipley, FL (Washington County) on the 3rd. A home was destroyed in Winter Garden, FL (Orange County) on the 4th. The Gold Coast experienced flooding, high winds, pea-to-nickel sized hail, and had multiple reports of funnel clouds during the 4th and 5th of September. Lightning from this event started a house fire in Broward County on the 5th, and there were numerous reports of waterspouts offshore of Fort Lauderdale and Miami beaches on the same day. A woman was injured while working at Palm Beach International Airport on the 8th when lightning struck her out on the tarmac. A severe storm moved through the Gainesville, FL (Alachua County) area on the 12th, causing reports of storm damage before it spawned two tornadoes in Branford County. The first tornado touched down near Sampson, FL and the second one touched down outside of Starke, FL. Both tornadoes were confirmed to have maximum wind speeds of 85 mph (EF0) and caused damage to structures and trees. On the 14th and 15th, a stationary front positioned across South Florida produced high winds along many locations in the Florida Keys. An EF0 tornado was confirmed near Southwest Ranches, FL (Broward County) as a severe storm moved through the Hollywood, FL area. Due to the effects of the Supermoon from September 24th – 30th, coastal locations along the Atlantic Ocean and Gulf of Mexico reported high tides above normal forecasted levels. The higher tides led to flooding of coastal roads and some urban areas. An area of localized heavy rainfall impacted counties in western part of the Florida Panhandle on the 28th through the 29th. Rainfall totals from the event ranged from 2.00” to over 12.00” in some locations. A waterspout moved onshore near Pelican Beach, FL (Collier County) on the 29th, and kicked up debris and snapped braches of trees before dissipating.

Agriculture Related Impacts.
At the beginning of September, soil moisture was adequate across 66% of the state, with about 23% of Florida at a surplus. The extended drought in the Panhandle, and spider mites, reduced peanut yields. Some counties that experienced heavy rains had fields with standing water and harvesting of hay, rice, and peanuts had yet to take place. Army worms were still a problem in some hay fields. Fall planting started in many counties in the Peninsula and southwest Florida. By mid-month, hay quality ratings were starting to decline for fields being stressed by too much or too little rain, or infestations of caterpillars or grasshoppers. Low lying fields in portions of South Florida were flooded due to heavy rains and frequent thunderstorms delayed planting. Other South Florida locations in the drought-impacted areas were still running irrigation. Cotton in some counties was defoliated to prepare for harvest. At the month’s end, peanut harvesting had reached 47% completion and corn harvesting had been delayed due to rain. Drier conditions allowed southwestern growers to get back on schedule with planting and land preparation. Pasture conditions in Flagler and Putnam counties showed signs of nutrient loss due to standing water. Statewide, cattle conditions were mostly good. Rains throughout September ended the drought conditions in the entire citrus producing area. Trees and fruits were in good shape and growers were preparing for early tangerine and grapefruit harvesting.

Drought Related Impacts.
At the end of August, nearly 40% of the state was experiencing abnormally dry (D0) or drought conditions, with the main concentration along the east coast of the state, the Big Bend, and the Florida Panhandle. Extreme drought (D3) was being reported in interior portions of Broward, Dade, and Monroe counties. Rainfall at the beginning of the month helped ease some of the drought conditions along the Gold Coast, but dry persistent conditions in the northern part of the state caused an increase in the amount of area affected by moderate drought (D1). Consistent rains in South Florida caused the removal of D3 and the overall improvement of the drought-impacted region. However, drought conditions in the Panhandle continued due to the lack of rainfall. Toward the middle of the month, rainfall in portions of Franklin, Gulf and Wakulla counties removed all mention of drought, while the rains in South Florida improved the overall dry conditions, and reduction of D2 from the state. At the end of the month, an extremely localized rainfall event impacted the western Panhandle counties. The rainfall totals, between 6 and 12”, prompted the removal of both D1 and D0 conditions from coastal areas in the region. Based on census data, the number of those impacted by drought during the month dropped from roughly 5.5 million Florida citizens to approximately 450,000 and drought conditions are currently reported in nearly 17% of the state. At the end of the month, the water level in Lake Okeechobee had increased to 14.73 ft., due to rainfall across the basin. 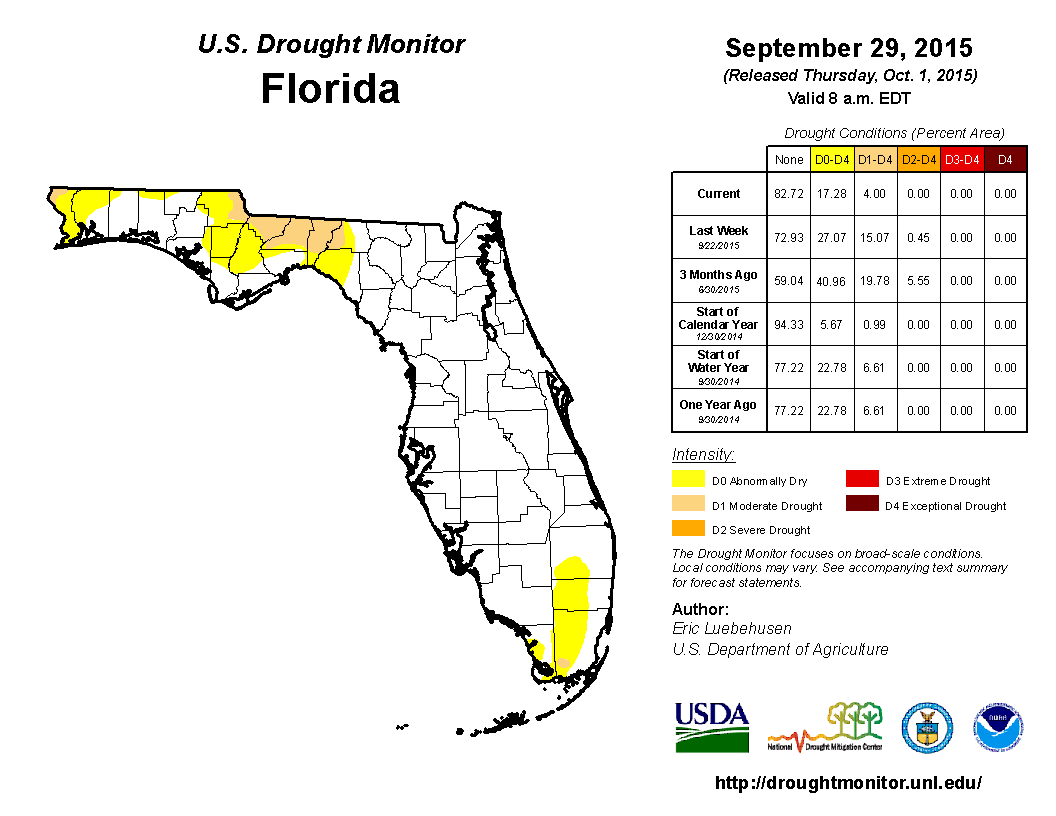 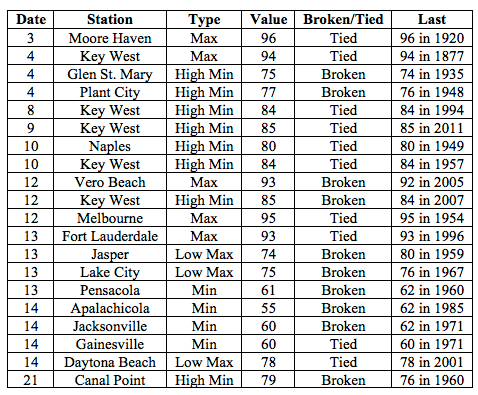