Disclaimer: Due to the Government Shutdown of 2013, certain data was not available for use in the October Climate Summary. This summary may be updated once data becomes available. We apologize for any inconvenience. Thank you. 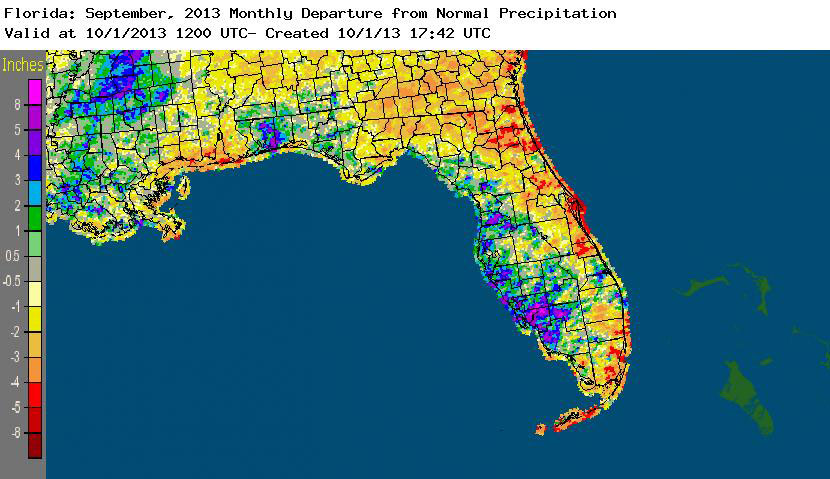 Year-to-Date Rainfall. With the above normal rainfall during the summer of 2013, here are the current year-to-date rainfall totals from select locations around the state, including their departures from the normal annual precipitation total. With the exception of the East Coast of the state, most locations are on pass to have normal to above normal rainfall amounts for 2013. There are three months left in the year and two months left in the 2013 Hurricane Season. 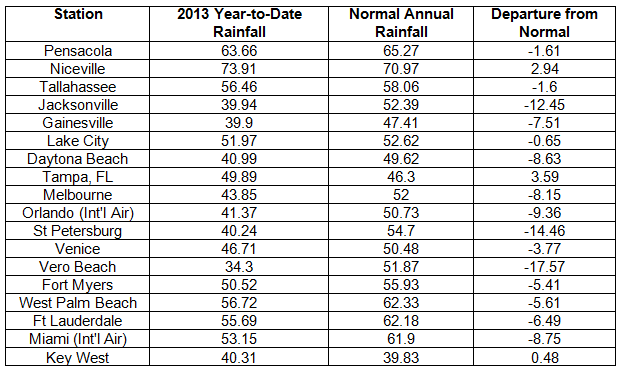 Hazardous weather events in September. There were 194 hazardous weather reports in Florida during September 2013. On September 6th, there were numerous high wind reports between Tampa and Fort Myers, with storm damage in Gainesville with lightning strikes and storm damage and high winds reported in nearby Lakeside. During the same day, flooding was also reported in Orlando. On the 15th, multiple reports of high winds and storm damage were reported in the Tampa area, and hail was reported in Ocala. Reports came in from the general public of a waterspout off the shore of Gifford, Florida. Damage consistent with a very weak EF-0 tornado was observed in Palm Beach County on the 16th; this same day, high winds were reported along the southeastern coast of Florida. On the 17th, heavy rains caused sporadic flooding in Naples, Panama City Beach, and Jupiter, Florida. From the 23rd through the 25th, tropic moisture from the Gulf of Mexico flowed onshore into portions of the western Florida peninsula, bringing heavy rains and flooding in and around the area of Brooksville, FL. The month was closed out by a few purely ornamental waterspouts putting on a show for tourists along the lower Keys.

Table 4: Breakdown of storm reports submitted in Florida during the month of September (compiled from Southeast Regional Climate Center).

Agricultural and other climate related impacts. At the beginning of September, roughly 90% topsoil and subsoil moistures levels were adequate to surplus across the state. Escambia and Santa Rosa counties sprayed and harvested peanuts, while there were reports of white mold on peanuts in Suwannee County. Hay was being cut in Gulf, Walton, Dixie, Pasco and Levy counties, and pasture conditions ranged from fair to excellent statewide. There were still some pastures that had standing water from the excessive summer rains, and horses in Dixie County showed signs of colic and thrush. Toward the middle of the month, many counties were waiting on dry days to bale hay that had been cut earlier in the month. Cotton boils opened (no defoliation), corn and snap bean harvesting continued, and sugarcane was planted. Wet conditions led to delays in field preparation and planting in Southwest Florida. The impact of the summer rains continued to show, from limited forage conditions to calves not gaining weight due to the lack of nutrients in pastures. The hay that was baled was of poor quality. However, the citrus area remained drought free, and grove activities (resetting trees, herbicide application, and brush removal) continued throughout the month. By the end of the month, greens, tomatoes, strawberries and cabbage were actively being planted, while hay and peanuts were harvested. Land preparation for winter crops and forage started across the state.

Despite below normal rainfall in portions of the state during September (Figure 1), the entire state remained drought free since July 9th. Normal rainfall totals in October and November are typically lower for the state; however, there are still two months left in the 2013 Hurricane Season. The potential for a late season storm impacting the state cannot be ruled out, especially with the recent activity in the Caribbean Sea. Lake Okeechobee remains at maximum capacity, allowed during hurricane season by the Corps, and most of the stream flow gauges across rivers statewide showed normal stream flow activity, though a few gauges in the western Peninsula were above normal due to recent rains.

Figure 2: Drought conditions in Florida as of September 24, 2013 (courtesy of U.S. Drought Monitor). 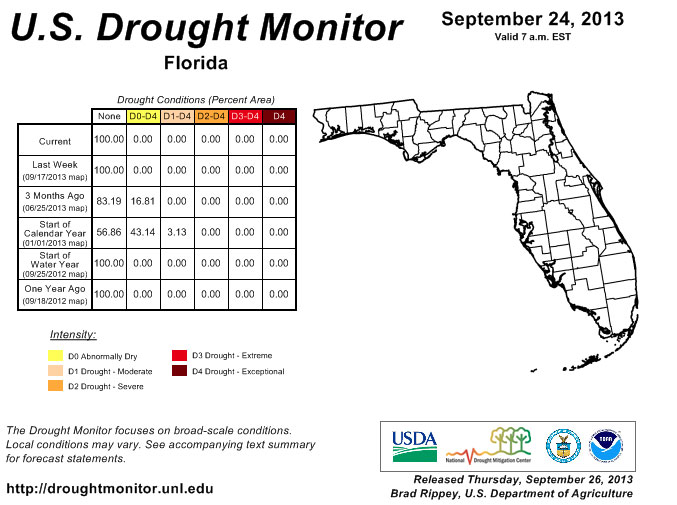