Rainfall totals varied across the state in September. Rainfall totals across the state varied in September (Table 2), though most of the coastal communities in Florida saw below normal precipitation for the month. Areal patterns of monthly rainfall relative to normal are depicted in Figure 1 and show how portions of north Florida reported near to above normal rainfall, along with areas southwest of Alachua County and interior portions of South Florida. Only a few precipitation records were broken in September (Table 3). Year to date (01/01/12 to 9/30/12) rainfall totals from some locations along the southeast coast (i.e., Miami, West Palm Beach, and Fort Lauderdale) have already reported rainfall amounts above their average annual totals and, with 3 months left in the year, it could mean 2012 may be the wettest year on at some locations. 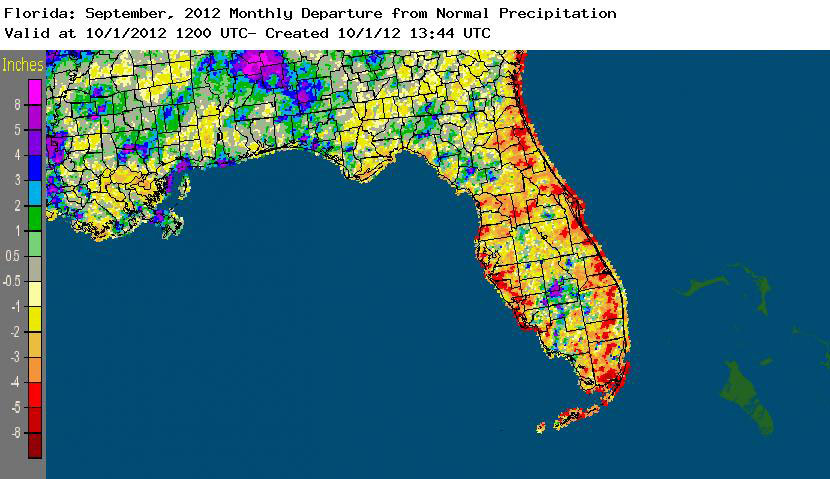 ENSO-neutral conditions continue in the Pacific. Neutral ENSO conditions continue to be reported for the equatorial Pacific. Equatorial sea surface temperatures (SST) are greater than 0.5˚C above average across the eastern Pacific Ocean. There is still a chance for El Niño to form and continue through the winter of 2012-2013. The Climate Prediction Center (CPC) predicts normal temperatures for the state and is predicting above normal precipitation in the western Panhandle through December.

Hazardous weather events in September After a fairly active August, September saw a drop in the number of hazardous weather reports across the state. Multiple waterspouts were reported in the Keys at the beginning of the month, along with a funnel cloud near Weston, FL. On September 5, many flooding reports came in from portions of Walton County, especially around DeFuniak Springs, from heavy rains that had fallen the day before in the same area. Also on the 5th, high winds (up to 60 mph), pea-sized hail and storm damage were recorded in and around the Fort Lauderdale area. More high winds, hail, and storm damage, along with some flooding and heavy rains, were reported in coastal areas from Palm Coast southward to Miami on the 6th and 7th. From September 8th-16th, most of the hazardous weather reports came from peninsular Florida, and the reports ranged from strong rip currents (resulting in one fatality) along Cocoa Beach to multiple waterspouts in the lower Keys and high wind reports from Tampa (gusts over 45 mph). Lightning strikes on the 17th and 18th in the Big Bend caused a large apartment complex fire in Panama City Beach and a fire in two separate homes in Leon County. The line of storms caused flooding in Madison County and multiple reports of storm damage and high wind as it pushed through the state. A severe storm produced dime sized hail in Fort Myers on the 20th. On the 22nd, heavy rains impacted portions of Miami and Fort Lauderdale, causing major flooding in both locations. The Miami NWS Office on the campus of Florida International University recorded 6.23” of rainfall during the event.

Table 4: Breakdown of storm reports submitted in Florida during the month of September (compiled from Southeast Regional Climate Center).

Agricultural and other climate-related impacts. At the beginning of September, there was concern about how the rainy summer (combined with two tropical systems) had impacted crops. Hay harvesting in some areas had been put on hold, and problems with wet fields posed problems for cotton and peanut growers. Cotton boll rot and white mold were reported in areas, along with rust effects in soybeans and nutritional deficiencies in some crops. Vegetable growers resumed land preparation. Cattle conditions seem to improve across the state, as the ample rainfall provided good pasture conditions. Citrus groves began application of fall miticide and continued to prepare young trees for the upcoming citrus season. Toward the middle and end of the month, hay cutting and peanut inverting began, as growers were able to get back into the field. Sugarcane planting started, after being delayed due to muddy fields from Tropical Storm Isaac. Some reports of diseases found in cotton, peanuts and soybeans fields. Vegetable growers were disrupted with daily rainfall, and began staking, tying and spraying as needed. Harvest preparations for Navels and grapefruit were underway.

Since the September 4th release of the Drought Monitor, conditions have not changed. The state remains drought free, despite some areas having below normal rainfall for the month. Fall is a typically dry period for the state, though passing fronts and the occasional sea breeze storm will bring rainfall to portions of the state. Water levels reported at Lake Okeechobee have risen from 14.24 ft to 15.63 ft.

Figure 2: Drought conditions in Florida as of September 25, 2012 (courtesy of U.S. Drought Monitor). 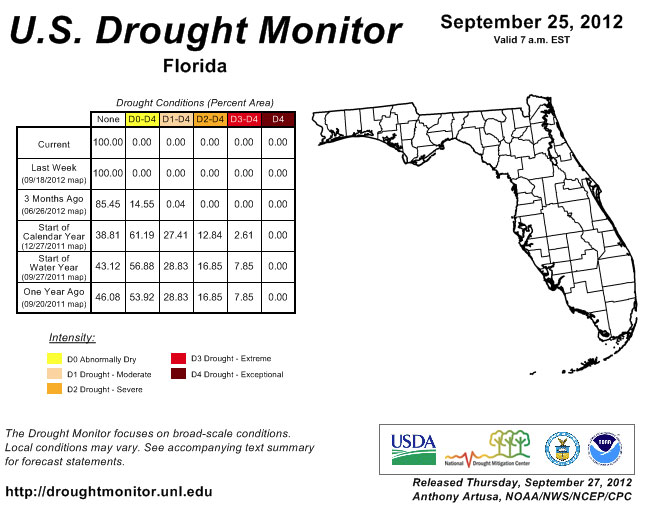 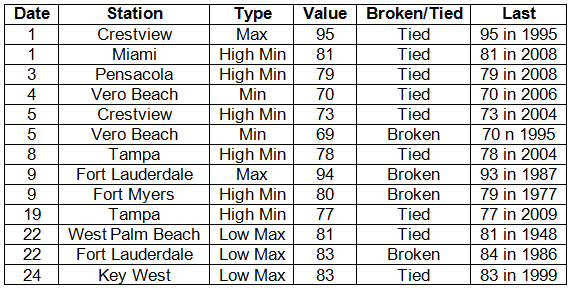