Rainfall totals varied in September. Rainfall totals varied greatly across the state during September (Table 2). In the north, the monthly total at Pensacola (8.15 inches) was more than two inches above normal. In contrast, the monthly total (4.99 inches) at Miami was almost five inches below normal. Three long-standing daily rainfall records were broken during the month (Table 3). In particular, a total of 3.36 inches at Key West on the 26th broke a daily record in existence since 1920. Areal patterns of monthly rainfall relative to normal are depicted in Figure 1. Particularly evident are (1) an above-normal area in the far northwest where Tropical Storm Lee produced several storm totals of almost eight inches and (2) a below-normal area along the central Atlantic coast. The latter area included Melbourne's monthly total (2.43 inches) that was more than five inches below normal. 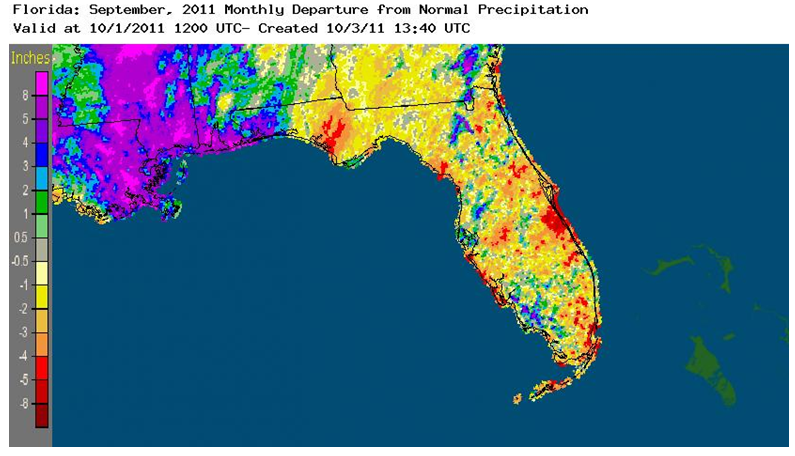 La Niña returns during September. By the beginning of September, cooling sea surface temperatures in the equatorial Pacific Ocean brought a return to a cold phase of ENSO, or La Niña. La Niña has little impact on weather in Florida during September.

Hazardous weather. Tropical Storm Lee spawned several tornadoes in northwest Florida from the 3rd through the 5th. On the 3rd, three tornadoes damaged structures and trees near Perdido Bay, Pensacola, and Crestview. A brief tornado touched down near Crystal Lake on the 4th. On the 5th there was widespread tree damage in the Panhandle. A tornado touched down near Dellwood and winds gusted to 65 mph at Mary Ester, 60 mph at the Panama City airport, and 59 mph at Pensacola. Farther to the east and south, trees were downed near Tallahassee, Newport, Capps, Madison, Lake City, High Springs, and St. Petersburg. Thunderstorm winds downed trees and power lines near St. Petersburg and damaged the roof of a condominium near Seminole on the 6th. From late afternoon on the 16th into early morning on the 17th, very heavy, convective rainfall occurred across inland northeast areas. Highest rainfall totals were more than nine inches near Jacksonville Beach. On the 26th, trees and power lines were downed near Arlington, Mayport, and Dungeness. Near the end of the month, one-inch diameter hail was observed at Mims on the 29th.

Agricultural and other impacts. Heavy rains during the month eased the drought in many areas of the state. Rain in the north delayed some peanut harvesting, but it loosened the soil for digging. Rain in the south interrupted some field planting while water was pumped from the fields. In contrast, extreme drought continued in a portion of the Panhandle and the extreme northeast corner of the state. 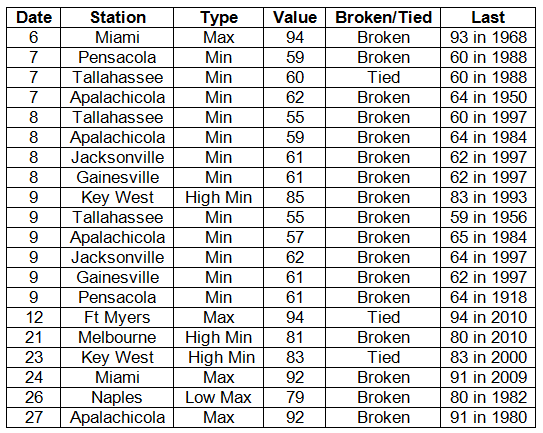