Temperatures near normal for September. Monthly average temperatures in September were near normal or slightly warmer than normal for the most part, averaging less than a degree above normal over Central and North Florida to around one and half degrees above normal over South Florida and the Pensacola area. Daily temperatures were very consistently in the normal range for most of the month, running slightly cool to normal in the first half of September and running 2 to 4 degrees warmer than normal during most of the second half. The very end of September brought the first cold front of the year to North and Central Florida. Overnight temperatures fell to the mid 60s over the Panhandle on the night of September 29. By the night of the 30th, the front extended down into south-central Florida. Overnight lows on this night ranged from the upper-forties to mid fifties in the Panhandle, and reached the mid sixties over much of Central Florida. The front did not penetrate south of a Fort Myers to Vero Beach line.

September rainfall totals generally below normal. Rainfall this month was fairly ordinary, characterized by the scattered afternoon thundershowers that are a normal component of Florida's summer climate. Rainfall departures for the month ranged from around one and half inches over Central and North Florida to 2.5 inches at Tallahassee. Most rainfall came from the normal scattered to isolated thunderstorms with no widespread heavy rain events impacting the state this month (unlike our neighbors to the north in Alabama and North Georgia).

The east coast of Florida did receive less rainfall than the west side of the peninsula and the Panhandle, as seen in the radar-derived rainfall estimates shown below (courtesy of NOAA NWS). 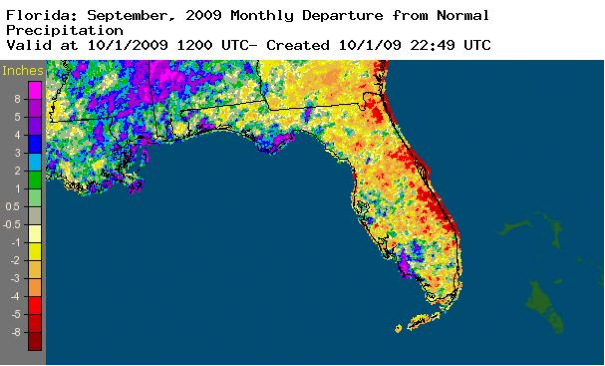 El Niño in place in the Pacific Ocean. Ocean temperatures remain warmer than normal over the central Pacific Ocean and are well above the 0.5 C threshold that commonly designates El Niño conditions. El Niño refers to a periodic (every 2-7 years) of the tropical Pacific Ocean along the equator from the coast of South America to the central Pacific. Modeling centers around the world that predict El Niño/La Niña agree that waters will continue to warm and result in a moderate El Niño during the fall and winter months. Although El Niño impacts on Florida's climate are weak during the summer and early fall, we may have begun to see some influence. The activity of the hurricane season in the Atlantic Basin is known to be suppressed by El Niño, and this year has been no exception.

Hurricane season quiet thus far. One weather feature noticeably absent in September was tropical storm or hurricane activity. Florida did not receive direct influence from any tropical system in the month of September, which is usually the peak month for hurricane activity in the Atlantic Basin. It is likely that the relative inactivity is caused by El Niño, which is know to create and environment of unfavorable vertical shear over the hurricane formation regions of the Atlantic. On average, tropical activity is responsible for roughly 30% of late summer rainfall in Florida and its absence explains the rainfall deficits for the month.

Agricultural and other impacts. As the summer progresses, some farmers are facing the problem of too much moisture rather than not enough. While September rainfall totals were generally normal to below normal, the accumulation of precipitation from previous months combined with frequent lighter showers have kept fields and soils on the moist side. In north Florida, peanut harvest is being delayed by wet fields and cotton quality is beginning to suffer due to the wetness. Around the Hastings area planting of potatoes and vegetables is delayed due to wet soils. Hay quality is suffering due to being over mature.