Rainfall totals were varied across the state in October.Most of the state had well below normal rainfall, although parts of the western Panhandle had above normal rainfall  (Figure 1). Major reporting stations registered departures from normal ranging from -4.18” to +2.83” (Table 2 and Appendix 1), although localized parts of the state saw rainfall totals that were as much as 5” below normal to 4” above normal (Figure 1).  October 2015 was the 2nd driest on record for Key West and West Palm Beach, 4th driest for Titusville, 6th driest for Jacksonville, and 10th driest for Daytona Beach. There were a small number of 24-hour precipitation records broken for the month (Table 3). 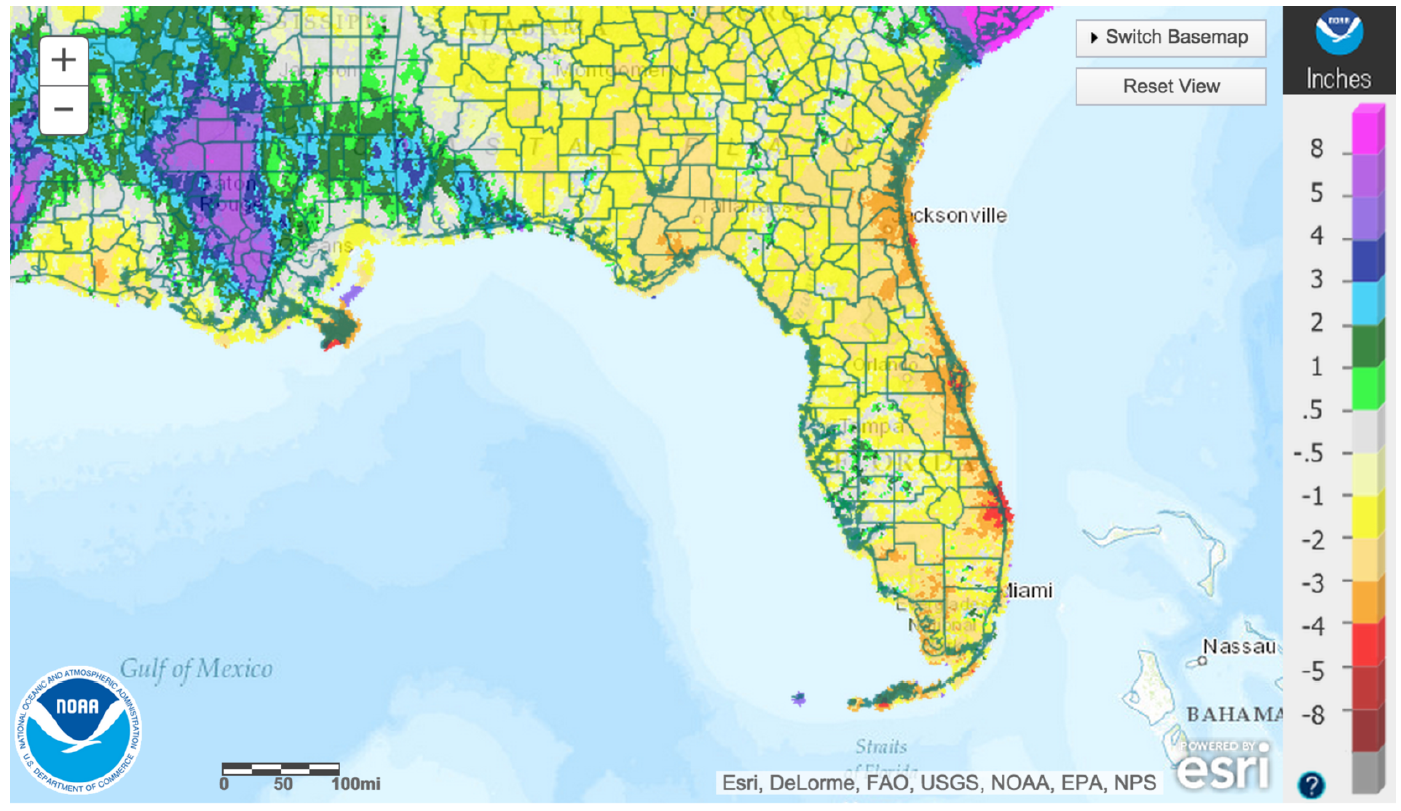 Based on current data and forecast models, the Climate Prediction Center (CPC) will keep the ENSO Alert System at an El Niño Advisory. El Niño conditions are present, and positive equatorial sea surface temperatures (SST) anomalies continue across most of the Pacific Ocean. According to the CPC, there is approximately a 95% chance that El Niño conditions will continue through the Northern Hemisphere winter 2015-2016, gradually weakening through spring 2016. CPC predicts above normal temperatures and precipitation for November. This El Niño is currently very strong, on par with the landmark El Nino's of 1982/1983 and 1997/1998.  Such a strong El Niño is sure to disrupt climate and weather patterns across the State throughout the winter and early spring seasons, most notably with frequent storms and rain and cooler temperatures.  See this wrap-up of El Niño impacts on Florida on our website: http://climatecenter.fsu.edu/super-el-nino-poised-to-disrupt-weather-patterns.

There were a total of 111 severe weather reports were made in Florida during October, the majority of which were for high winds and flooding (see Table 4). A low-pressure trough brought heavy rain and consequent flooding to portions of South Florida on October 7th. Some of the flooding resulted in street and road closures due to standing water. This was followed by unusually high tides causing widespread coastal flooding from Miami Beach to Fort Lauderdale between October 8th and 9th and again on October 25th through 28th. Coastal flooding was also reported in the area of Jacksonville and the St. Johns River on October 6th and 27th. Several waterspouts were reported between October 10th-15th in the Florida Keys and the Miami area, and three waterspout reports were filed on October 31st near Miami. On October 11th, a waterspout briefly came onshore near St. Petersburg as a F0 tornado, damaging an 18-wheeler and causing minor damage to trees and road signs, before returning over the water.  Multiple instances of high winds with gusts around 40 mph were reported throughout the day on October 19th and 20th along the Florida Keys. Numerous high wind and flooding reports were associated with a frontal system sweeping across the Florida Panhandle on October 26th-27th. It brought strong onshore winds with gusts (some up to 50 mph, leading to closing of Navarre Beach Pier) along the Florida Panhandle, causing coastal flooding and power flashes and outages in and around Panama City.

Table 4: Breakdown of storm reports submitted in Florida during the month of October (Compiled from Southeast Regional Climate Center.)

At the beginning of October, topsoil moisture levels were at mainly (78%) adequate, though some (17%) surplus values were reported across the state. By the end of the month, topsoil moisture levels were still mainly (75%) adequate, but some (19%) short values were reported. Peanut harvesting was completed at 55% by the first week of October; peanut yields and quality were very poor in Santa Rosa County due to wet conditions. Despite delays in harvesting due to rain and cloudy weather in some locations in the middle of the month, the peanut harvesting was completed at 89%, ahead of the five-year average, thanks to drier weather towards the month’s end. Cotton harvest was initially delayed in Walton County due to standing water, and some cotton had been defoliated in Washington County. Cotton harvest continued throughout the month in Jackson, Walton, and Washington counties. Haying was active in Columbia, Dixie, Pasco, Orange, Seminole, and St. Lucie Counties, with some setbacks in Orange and Seminole Counties due to wet conditions. Some farmers obtained only one cutting of hay and quality was poor due to previous rainfall. Fruit and Vegetables: Early in the month, Flagler and Putnam county farmers were behind on planting cabbage and leafy greens due to wet conditions. Drier weather in Charlotte, Collier, Glades, Hendry, and Lee counties allowed vegetable growers to catch up on planting. All crops were irrigated. Livestock and Pastures: Some pastures in Lee County had standing water while winter pastures in Jefferson County need rain. Summer and permanent pastures across the State declined seasonally. Statewide, the cattle and pasture condition was mostly good. Citrus: Conditions were favorable for citrus growers throughout the region. The citrus-growing region was seasonably warm, with lots of sunshine and little rain, but remaining drought-free through the month of October.

Drought Related Impacts.
At the end of September, most (83%) of the state was drought-free, while roughly 17% of the state (mainly counties along the northern portion of the Florida Panhandle and portions of Broward, Dade, Monroe, and Palm Beach counties) was experiencing abnormally dry (D0) or moderate drought (D1) conditions. D1 conditions were present in parts of Dade, Escambia, Jackson, Gadsden, Leon, Jefferson and Madison counties. The abnormally dry portions of Broward and Palm Beach County reverted to drought-free with the help of a good rain on October 17th. As October progressed, D1 conditions briefly broadened in the extreme western Panhandle, but a frontal passage over the area brought heavy rains on October 26-27 and significantly eased the drought conditions in the region. Despite the overall rain deficit for the month, roughly 86% of the state is now drought-free. Abnormally dry (D0) conditions are still present in Santa Rosa, Okaloosa, Jackson, Calhoun, Liberty, Taylor, Madison, Monroe and Dade counties. Moderate (D1) drought extends over Gadsden, Jefferson and Leon County, and in parts of Jackson and Madison County. In all, drought conditions are reported in about 14% of the state, currently affecting roughly 370 thousand Florida citizens. The water level in Lake Okeechobee at the end of the month is about 14.6 ft., slightly down from the beginning of the month. 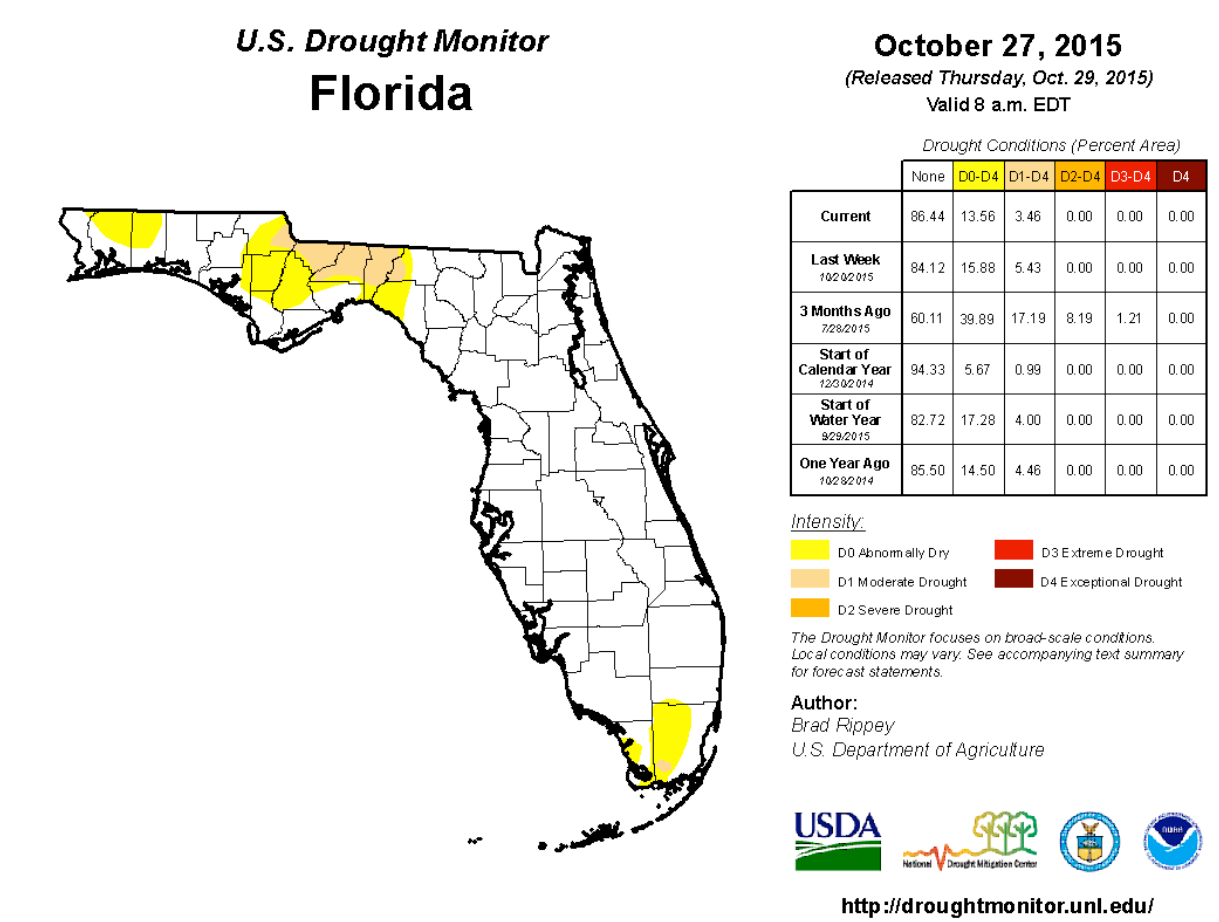