Rainfall totals varied across the state in October. There were a few pockets of near normal or slightly above normal rainfall (Flagler County) for October, but, on the whole, rainfall totals across the state were below normal for the month (Figure 1). Departures from normal roughly ranged from 0.54” to -3.89” (Table 2 and Appendix 1), though areas along the eastern coast of Florida saw rainfall totals that were as much as 5.00” below normal. October 2013 was the 2nd driest October on record for Orlando and Melbourne, the 3rd driest for Gainesville and West Palm Beach, the 4th driest for Vero Beach and the 7th driest for Naples. Numerous 24-hour precipitation records were broken for the month (Table 3). 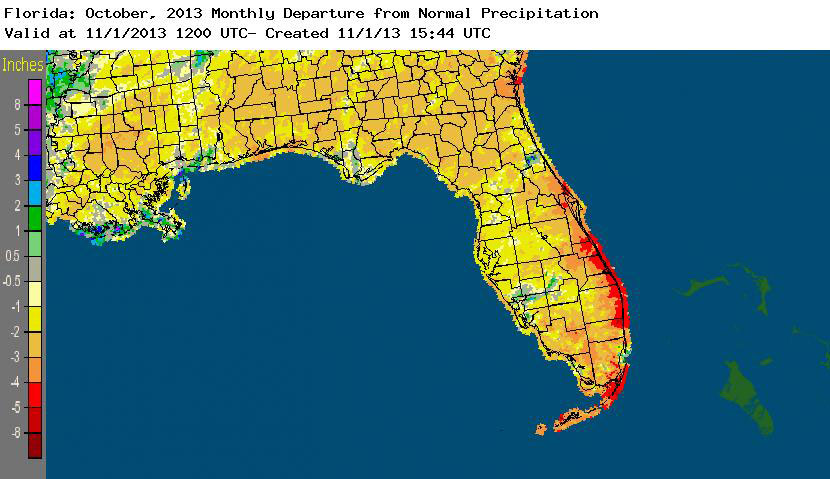 Hazardous weather events in October. In October, only 43 severe weather reports were made across the state. Flooding and heavy rains were reported in the Miami area on both the 2nd and 3rd, with a report of 6.73” from Pinecrest, FL, in the 24-hour period, causing numerous streets to flood. Between the 6th and 8th, 9 waterspouts were reported along the Florida Keys up the coast to Fort Lauderdale. On the 8th, a pilot and weather observer spotted a tornado on the property of MacDill Air Force Base.

Tropical Storm Karen. At the end of September, an area of disturbed weather formed in the Southwest Caribbean Sea, moved through the Yucatan Channel, and formed into Tropical Storm Karen on the 3rd of October. The forecasting models initially had Karen strengthening into a hurricane, but strong shear and dry air weakened the storm, and it deteriorated to a tropical depression on the 6th. While Karen threatened the Florida Gulf Coast, the storm caused increased wave heights and dangerous rip currents along north Florida. Many beaches posted double red flags, meaning that water was closed to the public. 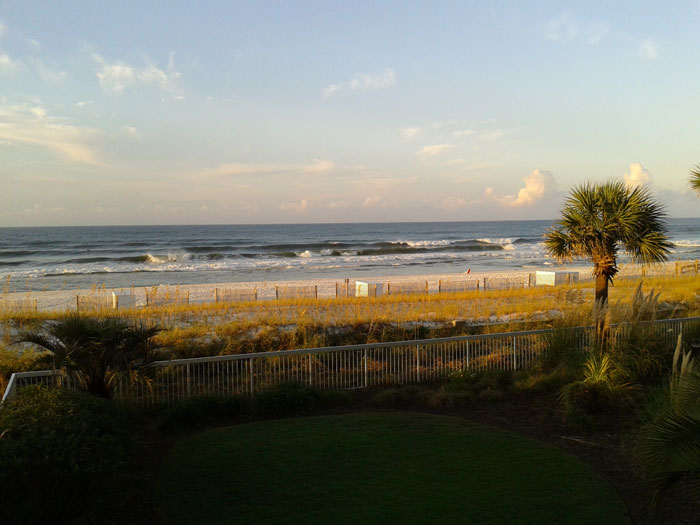 Table 4: Breakdown of storm reports submitted in Florida during the month of October (compiled from Southeast Regional Climate Center).

Agricultural and other climate related impacts. Topsoil and subsoil were near 100% at adequate or surplus levels at the beginning of the month. The majority of the peanut crop was reported in fair to good condition, with about 33% of the harvesting complete. Dry conditions led to increased harvesting activity in many counties: Jackson (cotton), Hamilton and Flagler (corn) and numerous Panhandle and Big Bend counties (hay). Bradford County prepared strawberry and planting green fields. Standing water, pests and drought limited the forage conditions. The lack of rainfall allowed peanut harvesting to be completed and the planting of winter forage to begin. Multiple crops (hay, soybeans, cotton, sugarcane) were actively harvested through the middle to the end of the month. Fieldwork for vegetables continued in most counties, though planting was behind schedule in Palm Beach County. The citrus growing area remained drought free and grove activities included resetting new tress, mowing, fertilizing and psyllid control. Winter grazing was stressed in Jefferson County, and the cotton yield was poor due to saturated soil in Jackson County. Sugar mills opened in Palm Beach County, and vegetable harvesting increased in most counties. By the end of the month, 33 of the 44 citrus packinghouses and seven of the 19 processing plants were open and small quantities were being shipped.

The combined below normal rainfall totals in September and October prompted the reintroduction of dry conditions (D0) toward the end of October. The D0 conditions were first identified in northeast Florida, around Jacksonville, St. Augustine, Glen St. Mary, Lake City and Orange Park. When the Drought Monitor was released on the 29th, the D0 category had doubled in spatial area and included all of Indian River County, portions of southern Brevard County and northwestern Escambia County. Statewide, normal November rainfall totals range from a low of 1.45” (Naples and Royal Palm Ranger Station) to a high of 5.40” (Niceville). Despite the lack of rainfall, Lake Okeechobee is reporting a lake water level of 15.23’ (as of November 1st) and South Florida water levels are well positioned for the start of the dry season. One month remains in the 2013 Hurricane Season, but any storms that form typically track away from Florida. The CPC forecast for the next three-months is predicting below normal rainfall, so the chance of seeing more dry conditions, and potentially drought, introduced into the state remains high.

Figure 2: Drought conditions in Florida as of October 29, 2013 (courtesy of U.S. Drought Monitor). 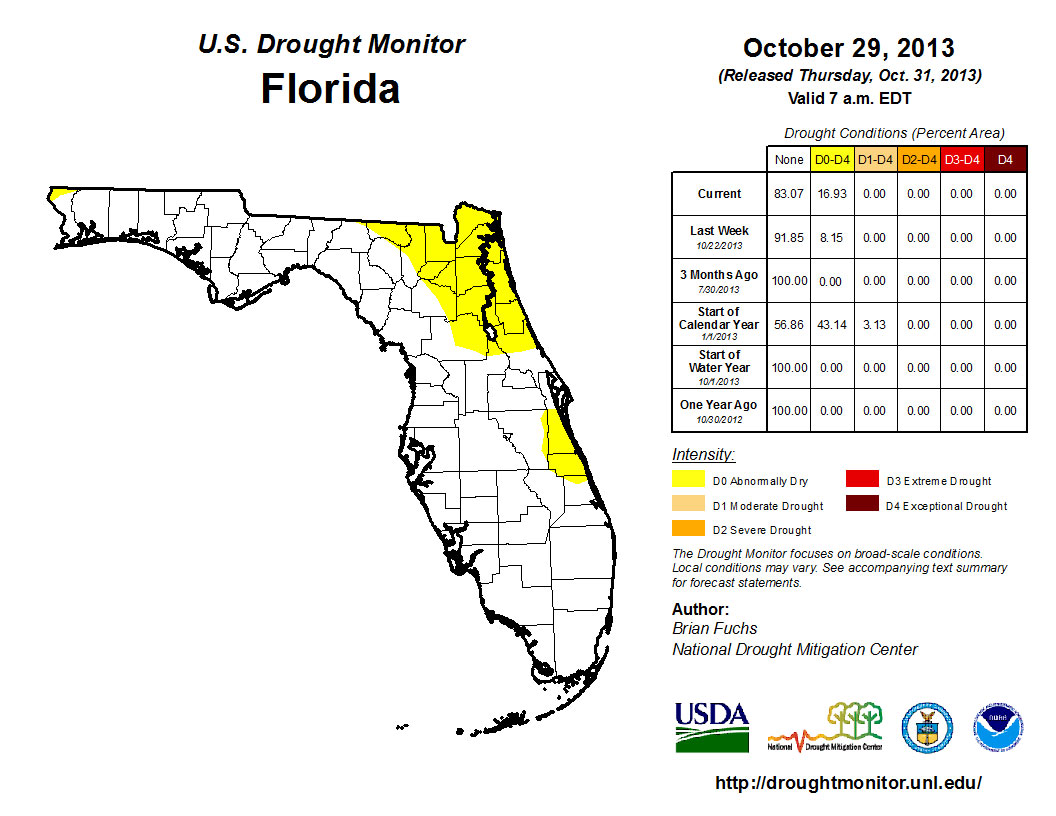 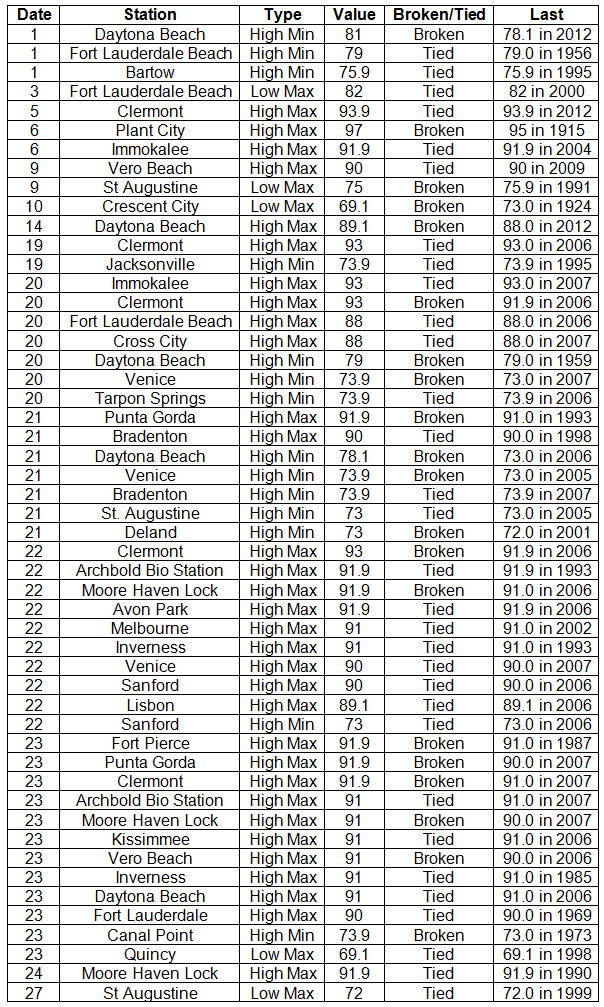