Rainfall totals varied across the state in October. Rainfall totals across the state varied in October (Table 2), with the northern part of the state seeing below normal rainfall, while portions of the interior peninsula and southeastern and southwestern coastal areas seeing above normal precipitation (Figure 1). Only a few precipitation records were broken in October (Table 3). The year to date (01/01/12 to 10/31/12) rainfall total of 85.93” (+32.93”) for Miami puts the 10-month period as the wettest on the 118-year record for the location, and 76.85” (+24.05”) at West Palm Beach is the 3rd wettest 10-month period. 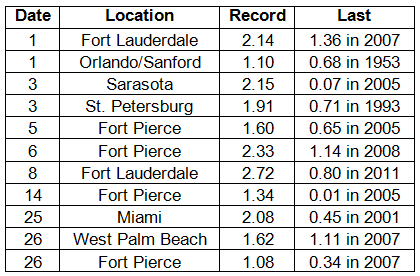 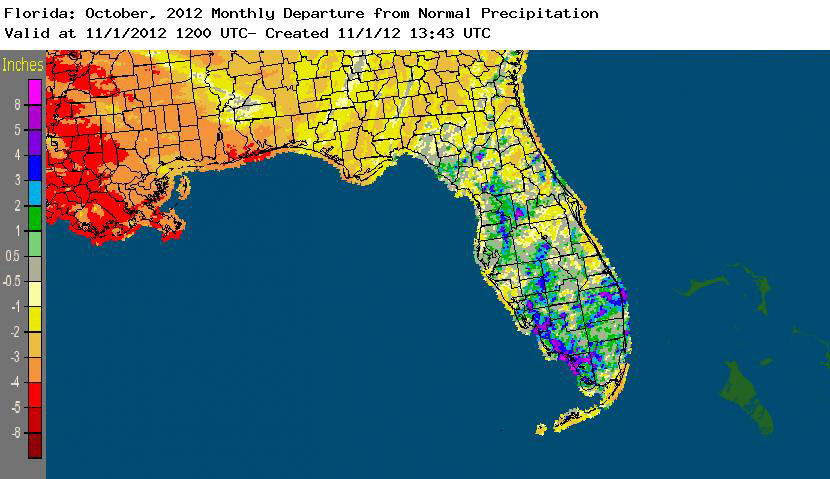 ENSO-neutral conditions continue in the Pacific. As of October 29th, neutral ENSO conditions continue to be reported for the equatorial Pacific. Equatorial sea surface temperatures (SST) are greater than 0.5˚C above average across the western and central Pacific Ocean. ENSO-neutral/weak El Nino conditions are expected to continue through the winter of 2012-2013. The Climate Prediction Center (CPC) predicts normal temperatures for the northern part of the state, and below normal temperatures for the peninsula; they are also predicting above normal precipitation in the western Panhandle and north Florida through January.

Hazardous weather events in October October was a fairly quiet month for severe weather across the state with only 273 severe weather reports. On October 1st, a man was injured after being struck by lightning in Villano Beach. Hail (0.50") was observed in Palatka, while winds up to 40 knots (46 mph) were reported in the Tampa area on October 4th. The following day, multiple reports of heavy rain were made in Jacksonville and a waterspout was seen offshore of St. Augustine. On October 6th, a waterspout was reported off Sugarloaf Key, and a funnel cloud was reported in Wellington. Heavy rains were observed on the 7th in Okeechobee and in the Jacksonville-Gainesville area (along with numerous reports of storm damage), with hail reported in Gainesville. Flooding and heavy rain was reported in the same areas on the 8th. Between October 14th and 15th, high winds (40 mph) were reported in southern portions of the Keys and high tides were observed on the 15th in southeast Florida. Heavy rain and high winds were reported along portions of the eastern coast from Boynton Beach to St. Augustine on the 17th. Of the 273 severe weather reports for the month of October, 224 of these reports were made from the 25th-31st, which coincides with when Hurricane Sandy, despite being well offshore of the East Coast of Florida, impacted the state. 141 of those reports were categorized as high wind, 15 were of coastal hazards and flooding, and the remaining 68 were thunderstorm hazards. Combined with high tides, waves from Hurricane Sandy battered portions of the East Coast of Florida. Below are some pictures taken by the National Weather Service in Miami of some of the coastal impacts on Fort Lauderdale and Deerfield Beach on October 28th.

Figure 2: Waves from Hurricane Sandy crashing against the pier in Deerfield Beach. 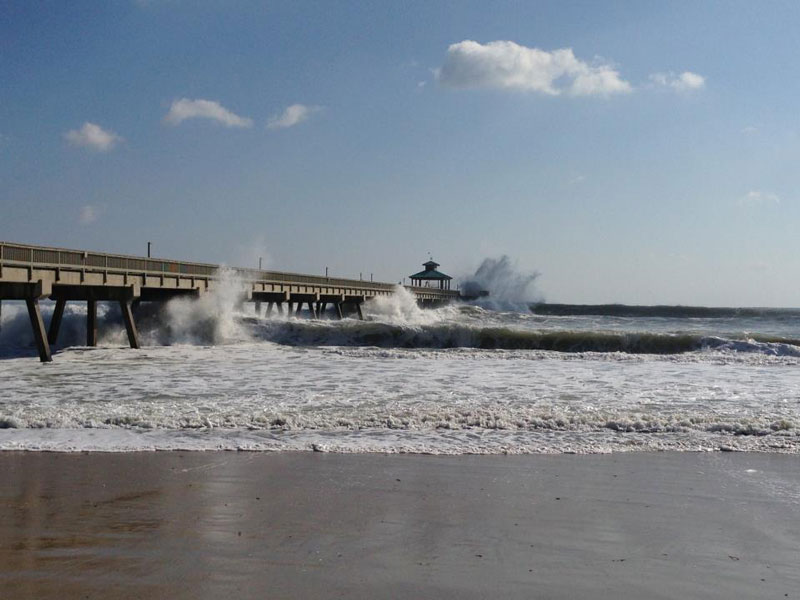 Figure 3: Taken on the morning of October 28th: coastal flooding during high-tide along A1A in Fort Lauderdale Beach. 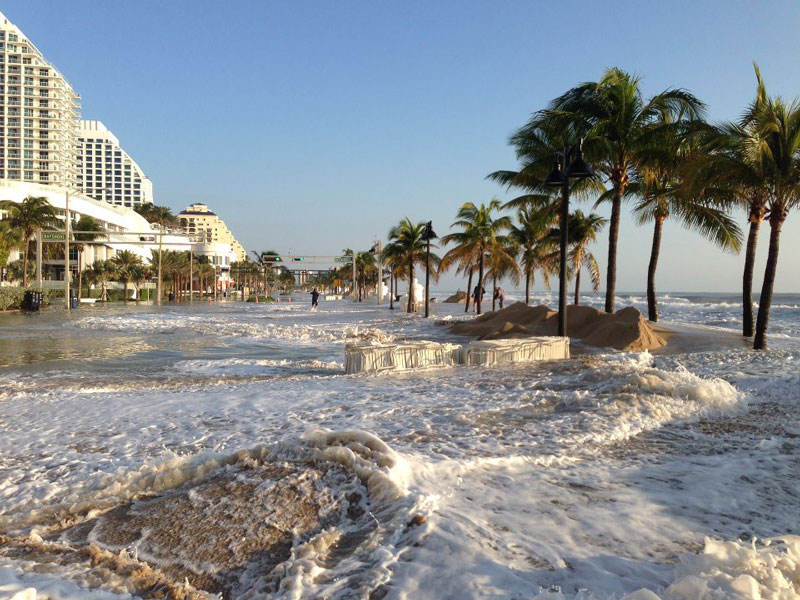 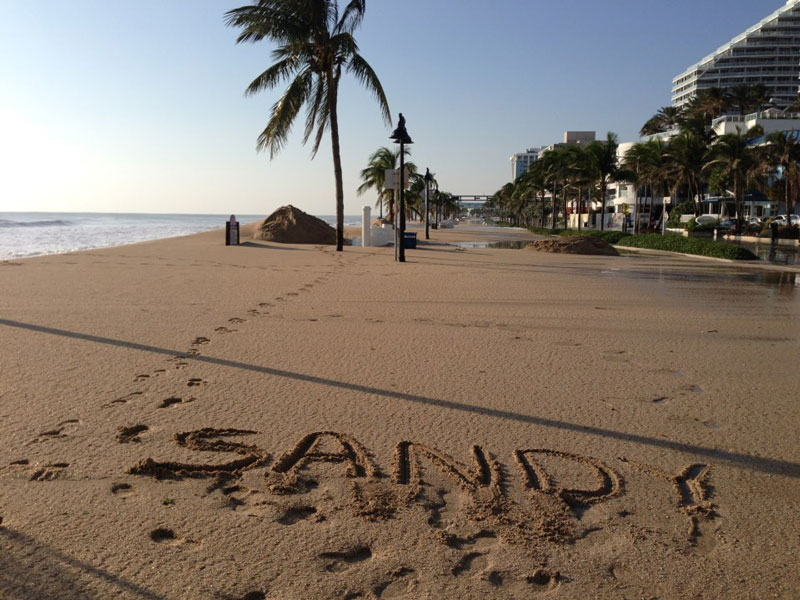 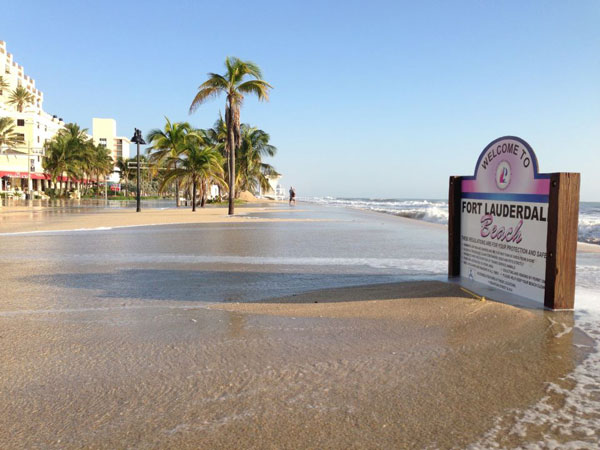 Table 4: Breakdown of storm reports submitted in Florida during the month of October (compiled from Southeast Regional Climate Center).

Agricultural and other climate-related impacts. Sugar cane harvesting began early in Hendry and Glades counties due to anticipated high yields, while wet conditions in Palm Beach County delayed harvesting and replanting. Fall vegetable harvest started in the early part of October and some growers in South Florida began planting winter crops. General grove maintenance continued in central and southern parts of the state. Cattle and pasture conditions ranged from poor to excellent, with most of the conditions being fair to good. By mid month, peanut, cotton, hay and corn harvesting began in Escambia, Gadsden, Jackson, Santa Rosa and Washington counties. Dry conditions at the end of the month aided in the continued harvesting of crops in the Panhandle. All of the hay had been cut in Columbia County, and most of the hay had been cut in Bradford, Highlands and Seminole counties, and Columbia and Suwannee counties began planting winter forage. Pasture conditions are beginning to decline seasonally and growth has slowed. Strawberry planting has begun and processing plants and packinghouses are now open.

October is typically a dry month for Florida and the observed rainfall varied from below normal to above normal across the state. This was the second month in a row that there was no drought designation in the state. Other areas of the Southeast U.S. saw an expansion of some of the dry conditions, especially in parts of Georgia and South Carolina. Normal rainfall is expected in Florida during the month of November but the recent dry weather has put the state under an increased fire risk for the next few weeks, as we will remain fairly dry over the next month. Despite the dry weather, Lake Okeechobee's level has risen to 15.87 ft, and most of the rivers in the state are reporting normal river levels.

Figure 6: Drought conditions in Florida as of October 30, 2012 (courtesy of U.S. Drought Monitor). 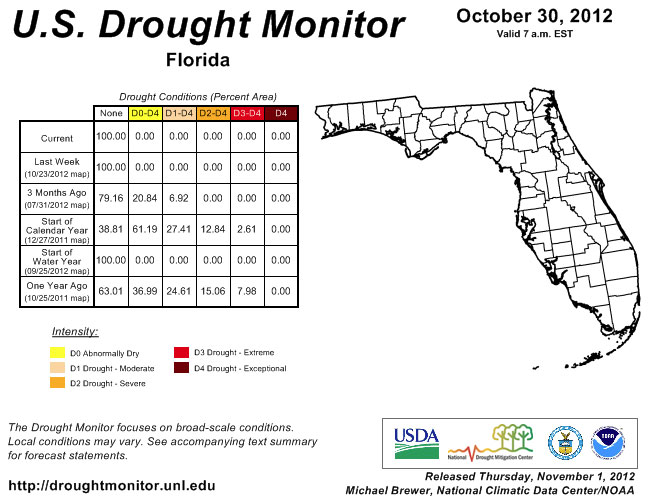 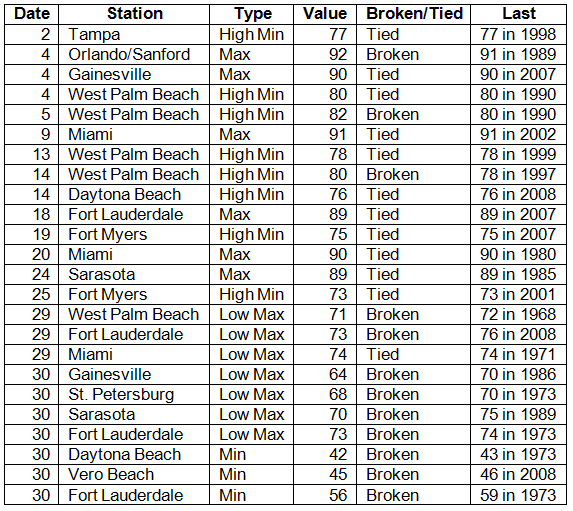