Average temperatures near normal for October. Overall, average temperatures for October were near normal (Table 1). Even so, there were many daily records set during the month (Appendix). During the first half of the month 12 daily minimum records were tied or broken. Among these, low temperatures of 45° F at Apalachicola and 47° F at Gainesville on the 7th broke records in existence since 1932. During the last eight days of October, 26 daily maximum records were tied or broken. High temperatures of 92° F on the 26th and 91° F on the 28th at Gainesville broke records in existence since 1932 and 1911, respectively. Tallahassee observed record high minimum temperatures on both the 26th and 27th.

October rainfall totals much below normal except in the Keys. October rainfall totals were much below normal in almost all areas of the state (Table 2). Miami's monthly total was more than four and one-half inches below normal. Jacksonville and Orlando did not officially record rain and Tampa recorded only a trace during October. This was the driest October on record at these three stations. In contrast, a localized heavy rain event (3.44 in) on the 26th at Key West raised the monthly total above normal. The general sparseness of rainfall across the state during October is depicted in Figure 1. Departures from normal in eastern and southeastern coastal areas exceeded five inches.

Hazardous weather. No severe local storm events were reported during October. As Tropical Storm Paula passed near the Keys on the 12th, 8.28 inches of rain was recorded at the Marathon airport, resulting in the wettest day on record at that site. Small areas near the border with Alabama and along the east-central coast have reached extreme drought conditions. Severe drought conditions are present in the western Panhandle and along the northern two thirds of the Atlantic coast. Most of the northern two thirds of the state have abnormally dry conditions.

Agricultural and other impacts. Dry soil in western areas of the Panhandle hindered peanut digging as farmers harvested peanuts early in response to the worsening drought. Cattlemen have begun to use hay to supplement pastures that are in poor condition. River and well levels have continued to decrease in northern areas. Wildfire danger increased across most of the state as rainfall remained well below normal. 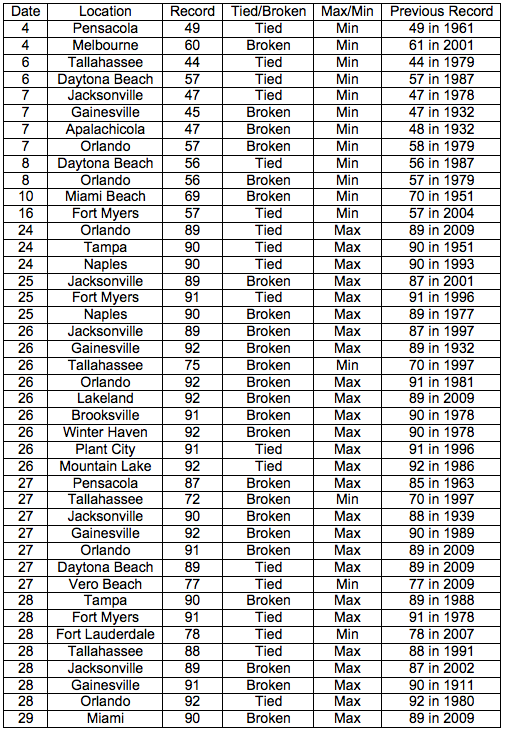