Temperatures above normal for October. Monthly average temperatures in October were above normal throughout the state. Jacksonville, Miami and Tallahassee were more than three degrees above normal. The monthly average temperature of 82.4 degrees F at Miami (Table 1) was the warmest on record, breaking a previous record of 82.05 degrees F set in 2002. Record high temperatures were set in all parts of the state. Clewiston recorded 97 degrees F on the 6th. Later, Orlando (8th), Tampa ( 9th and 10th) and Lakeland (29th) later reached 95 degrees F. Also, stations in Central and South Florida recorded 10 or more days with maximum temperatures of 90 degrees F or above. In contrast, numerous low temperature records were set or tied across the state after a strong cold front moved down the peninsula during the middle of the month. The coldest was 36 degrees F at Tallahassee on the 19th, which tied the minimum record for that date. Another cold front moved through the north and central parts of the state on the 28th. The minimum temperature of 38 degrees F at Lakeland on the 29th was the coldest temperature ever recorded during October in Polk County.

October rainfall totals generally near or below normal. A ridge of high pressure kept most of Florida in dry and warm conditions for most of the month. While heavier amounts were observed near the mid-month cold front, particularly in North Florida, most rainfall fell as scattered showers or thundershowers. Rainfall totals for October were mostly near normal in North and Central Florida, but well below normal in South Florida. Fort Lauderdale recorded its all-time driest October (0.73 in), breaking the previous record of 0.94 inches recorded in 1977. While many stations had below normal rainfall, Pensacola recorded a monthly total of 11.28 inches, more than seven inches above normal (Table 2).

A graphical depiction of the monthly rainfall departure from normal for October is given in the figure below. (courtesy of NOAA NWS). Departures range from over eight inches above normal in the Northwest to more than five inches below normal at some locations near the Southeast coast and Keys. 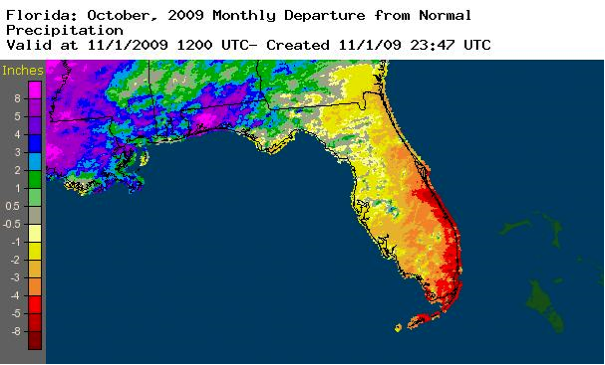 Hazardous weather. No tropical systems directly affected Florida during October. Two named storms, neither of which became hurricanes, remained far out in the Atlantic Ocean. As a strong cold front entered the state on October 15, golf ball hail and winds of 58 miles per hour were observed southwest of Tallahassee. Several homes were damaged by thunderstorm winds in Woodville. On October 16, thunderstorm winds blew down a small barn in St. Johns County.

Agricultural and other impacts. After some delays to the peanut and cotton harvests due to locally heavy rain in the North, drier weather late in the month allowed the harvests to resume. Some vegetables were damaged by frost and/or cold temperatures. In contrast, some crops in the South suffered heat stress from the abnormally high temperatures. Pastures in some Central and South areas are in poor condition due to the continued below normal rainfall.