Rainfall totals in November were mixed across the state. Rainfall totals in November 2017 were below normal for the Panhandle and most of Peninsular Florida (Figure 1), although some areas in the northern portion of the Peninsula and along the Atlantic coast were above normal. Departures from normal roughly ranged from -4.65” in Pensacola to +2.52” in Fort Lauderdale (Table 2 and Appendix 1), although localized parts of the state saw rainfall totals that were 5.00” or more below normal to 8.00” or more above normal (Figure 1). November 2017 was the driest on record for Pensacola and 10th driest for Orlando and Tampa. Melbourne had the wettest fall season on record, with 36.97’’ of total rainfall measured at the Melbourne international airport, beating the previous record of 32.95’’ set in 1999. Melbourne’s fall season rainfall was a whopping 21.39’’ above normal. (Official records at Melbourne have been kept since 1937.) A few 24-hour precipitation records were broken across the state for the month (Table 3).

Figure 1: A graphical depiction of the monthly rainfall departure from normal (inches) for November is given in the figure below (courtesy of NOAA, NWS) 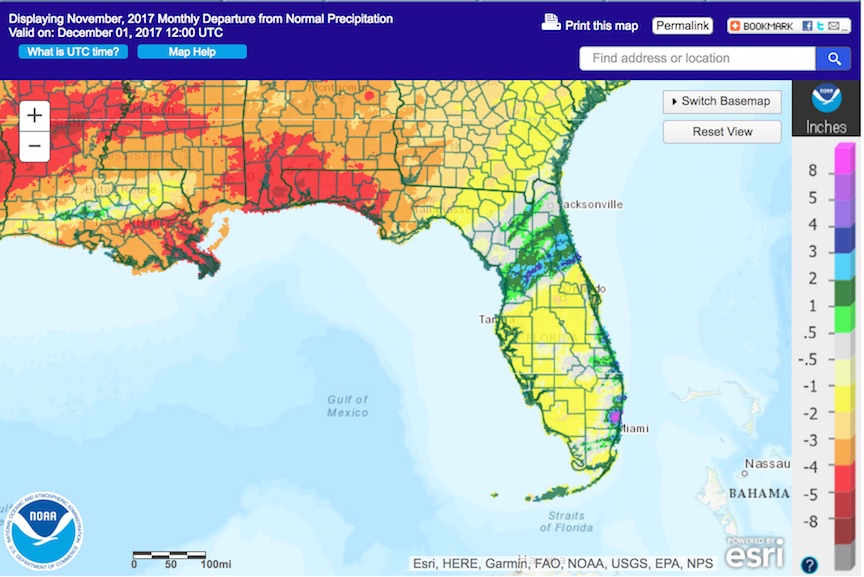 Based on current data and forecast models, the Climate Prediction Center (CPC) the ENSO alert system status is set to La Niña Advisory. La Niña conditions are currently present, with sea surface temperatures below-average across the central and eastern equatorial Pacific Ocean. Forecast models predict that La Niña conditions will continue at least through the winter of 2017-2018. Taking into account the ENSO forecast and long-term trends, the CPC seasonal outlook favors above-normal temperatures and below-normal precipitation for Florida through February 2018.

November 2017 was relatively quiet, with only 29 hazardous weather events recorded by the National Weather Service Local Storms Report Database for the entire month across the state (see Table 4 for breakdown by event type). Minor street flooding due to high astronomical tides was seen on the 5th of the month in Broward, Miami-Dade and Palm Beach Counties. Rainfall amounts (exceeding 3-4’’ in 24 hours) were reported in Martin County on the 13th. Several instances of marine thunderstorm wind gusts of 40-45 mph were reported in Walton, Bay and Franklin County on the 19th. A possible tornado was observed in Collier County on the 22nd. Some heavy rains associated with a frontal passage were reported in Brevard and Volusia Counties on the 23rd, along with isolated reports of strong winds and storm damage. Dense fog was reported on the last day of the month in parts of Leon and Walton Counties.

Table 4: Breakdown of storm reports submitted in Florida during the month of November (Compiled from Iowa State University/Iowa Environmental Mesonet.)

At the end of October the entire state was drought-free. As the month progressed, abnormally dry (D0) to moderate drought (D1) conditions gradually developed over the Panhandle, from Escambia County on the west to Baker, Union, Alachua, and Levy County on the east. As of the latest U.S. Drought Monitor Report, issued on the 28th, about 22% of the state is experiencing D0 conditions, and about 12% of the state (including Bay, Calhoun, Gadsden, Gulf, Holmes, Jackson, Franklin, Liberty, Washington, and parts of Leon, Walton, Wakulla Counties) is experiencing D1 conditions. Based on census data, roughly 450,000 Florida citizens are currently impacted by drought.

At the end of the month, Lake Okeechobee water levels were at 16.08 ft., which is above normal for this time of the year. The high Lake elevations since hurricane Irma in September have necessitated continuing discharge of large volumes of water into the St. Lucie River, which has resulted in a large plume of low-salinity turbid nutrient-rich water extending into the Gulf. These discharges are expected to be reduced soon, as the dry season progresses and lake levels continue to go down. 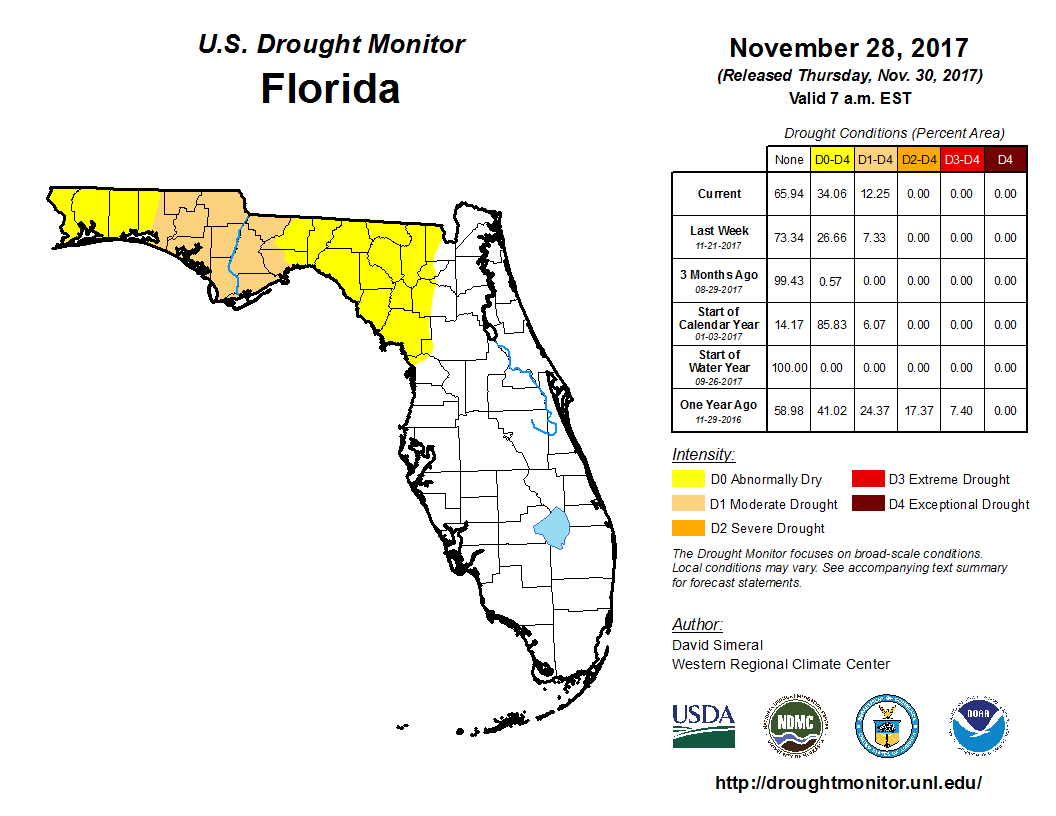 At the end of October, topsoil moisture levels across the state were at predominantly adequate (52%) to surplus (37%) levels, although some short values (11%) were also observed. As the month progressed and abnormally dry to moderate drought conditions settled in over the Florida Peninsula, the proportion of surplus values decreased, and that of short values increased somewhat.

The citrus growing area has remained drought-free. Post-hurricane cleanup finally drew to a close for even the most damaged areas, and caretakers have resumed normal grove maintenance. Harvesting for the fresh market is underway for a number of orange, grapefruit and tangerine varieties.

Cattle across the state were in mostly good condition. Pasture quality across the state was mostly good to fair, and seasonally declining with cooler temperature and drier conditions. Supplemental feed is expected to be needed soon in Hernando and Sumter Counties. Winter pasture planting has been reported in Bradford, Jackson, Lafayette, Osceola, and Walton Counties.