Rainfall totals in November were well below normal across the state. Rainfall across the state was well below normal  (Figure 1). Most parts of the state received less than a quarter of the normal, and large portions received less than one tenth of the normal amount of precipitation for November.  Major reporting stations registered departures from normal ranging from -3.87” in Pensacola to -1.54” in Tampa (Table 2 and Appendix 1). No major reporting station registered more than 1” of rain for the month, and the majority reported well under 0.5”.  November 2016 was the driest on record in Fort Myers, the 2nd driest on record in Gainesville, Melbourne, Orlando, Tampa, the 3rd driest on record in Jacksonville, and the 4th driest on record for Key West and Daytona Beach. No 24-hour precipitation records were broken for during the month. 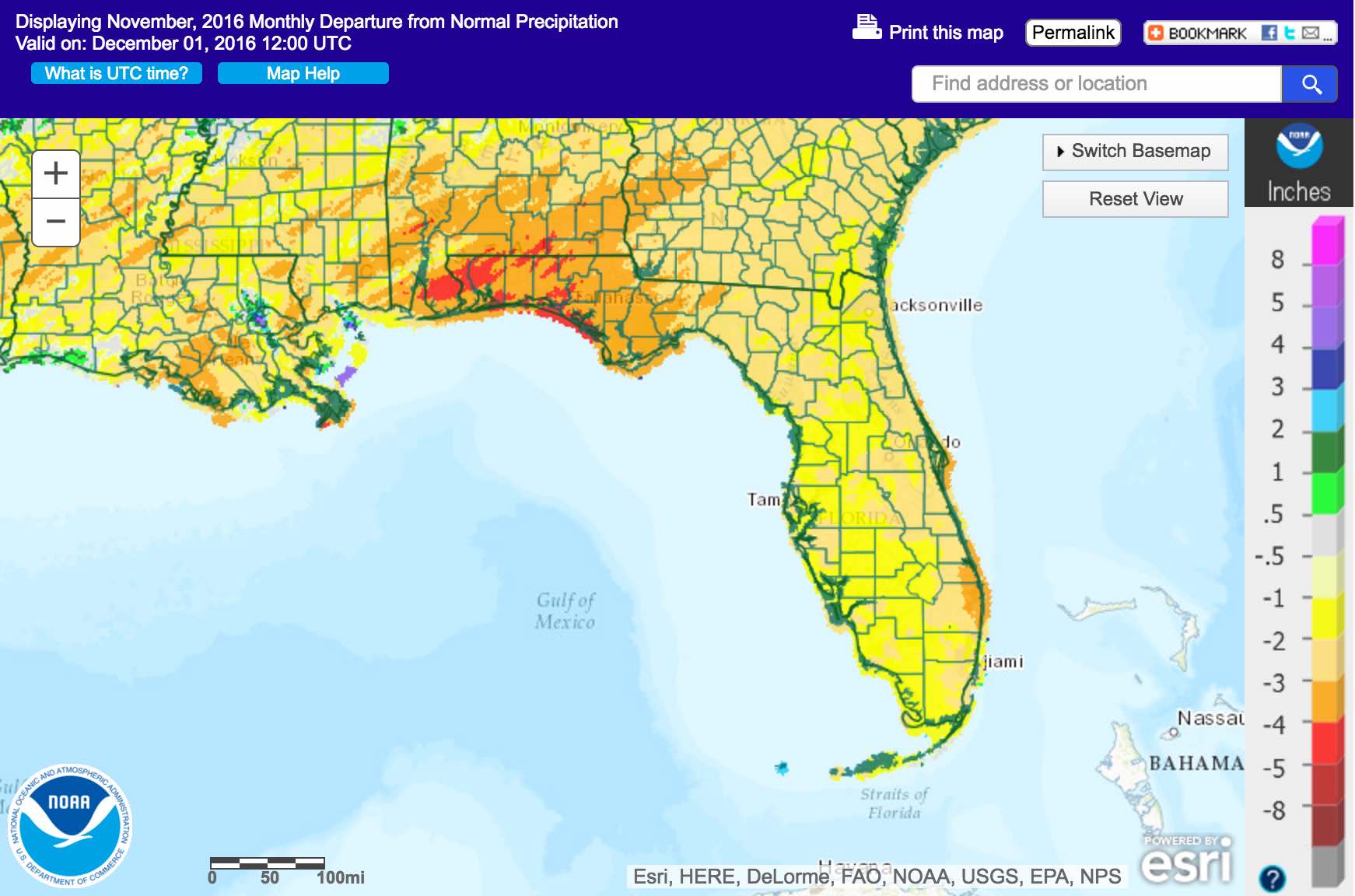 Based on current data and forecast models, the Climate Prediction Center (CPC) the ENSO Alert System is set at a La Niña Advisory. La Niña conditions are present, with below-average sea surface temperatures in the central and east-central Pacific Ocean. There is approximately a 55% chance that La Niña conditions will continue through the Northern Hemisphere winter 2016-2017, gradually weakening through spring 2017.  The CPC seasonal forecast favors above normal temperatures and below normal precipitation across Florida for the winter of 2016-2017.

TThere were a total of 33 severe weather reports made in Florida during November, making for a relatively quiet month (see Table 4, from data collected by the Southeast Regional Climate Center, http://sercc.com/lsr for breakdown by event type). Most of these reports were of coastal flooding which was the result of seasonal king tides being additionally boosted by the stronger gravitational pull caused by the unusual closeness of the full moon between November 12th and 14th. Coastal flooding from these high tides was reported along the Atlantic coast, in Jacksonville and from Miami to West Palm Beach, with up to 6 inches of water along some streets. A few waterspouts were spotted in South Florida and along the Florida Keys throughout the month with no associated damage reported. A cold front on the 30th brought some localized severe weather to portions of northwest Florida, where reports included a waterspout coming onshore near Destin and suspected tornado near Fort Walton, causing minor damage to structures. 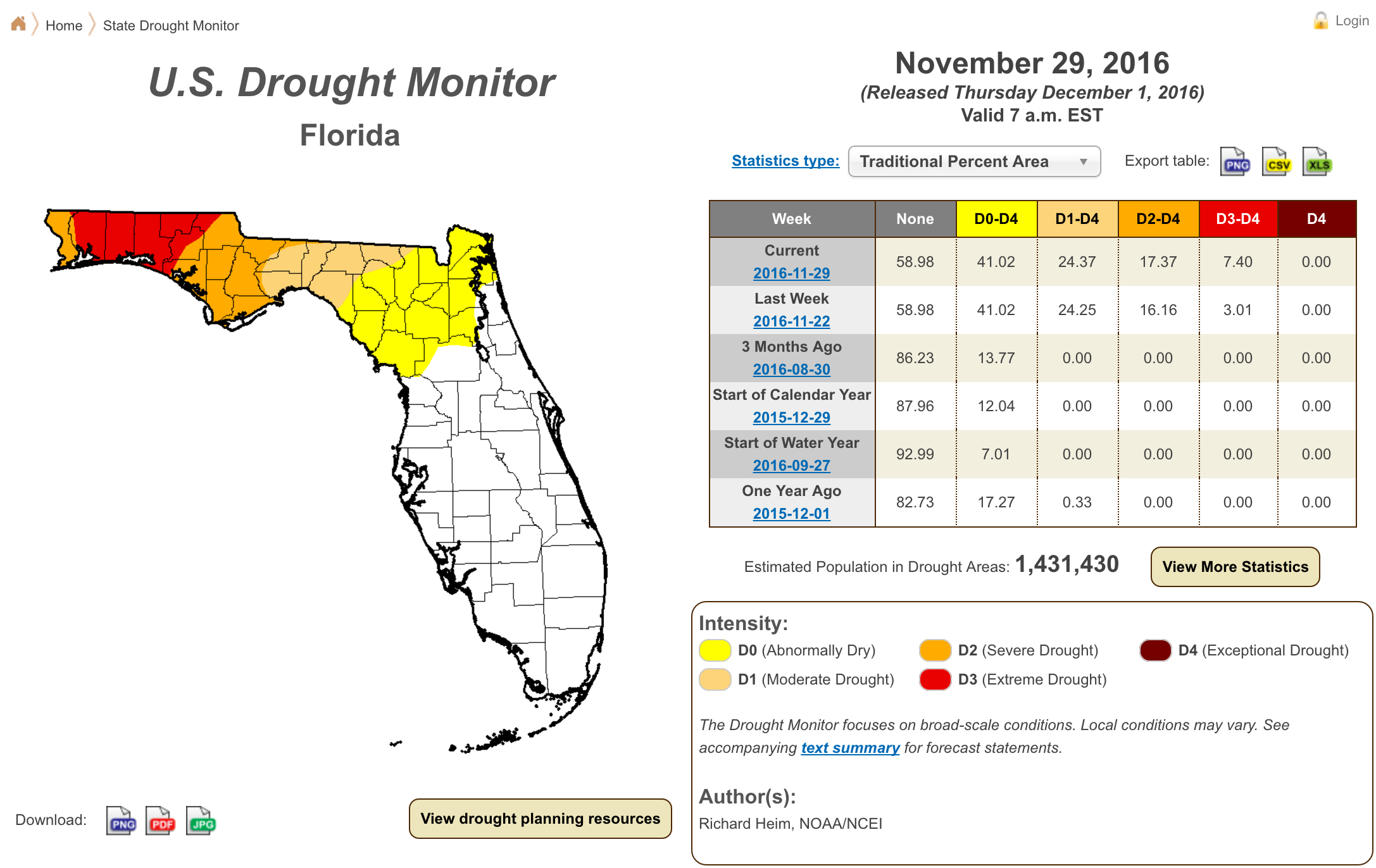 At the beginning of November, topsoil moisture levels across the state were at mainly (59%) adequate, with the remainder ranging from surplus (8%) to short (20%) or very short (13%). Below normal rainfall and above normal temperatures have reduced soil moisture levels, shifting to drier conditions by the end of the month, with 40% of topsoil moisture levels reported adequate, 24% short, and 35% – very short. Cotton harvesting continues, and peanut harvesting is wrapped up for the season. Dry conditions have been having an impact on field crops in many areas, particularly in the Panhandle and North Florida. Drought conditions are interfering with the planting of winter field crops and winter forages, particularly in Jackson and Holmes Counties. Hay cutting in Jackson County is hampered by the dry conditions. Pasture conditions are declining because of drought conditions in all but the southern part of the state, and water sources are drying up. There are reports from Holmes County of stock ponds drying up and wells going bad. Because of the declined pasture conditions producers are feeding hay earlier than expected. Despite that, cattle remain in mostly good to fair condition. The citrus growing region remains drought-free but groves are regularly irrigated to offset the deficiencies in rainfall. Irrigation is also widely employed by vegetable growers and land is being prepared for planting. Sugarcane harvesting in Glades, Hendry, and Palm Beach Counties continues on schedule