Rainfall totals were varied across the state in November. The Panhandle and portions of peninsular Florida (particularly areas near Jacksonville and Miami) had well above normal rainfall, while most of coastal peninsular Florida recorded below normal rainfall (Figure 1). Departures from normal roughly ranged from -0.80” to +4.83” (Table 2 and Appendix 1), though localized parts of the state saw rainfall totals that were as much as 2.00” below normal to more than 8.00” above normal (Figure 1). There were several 24-hour precipitation records broken for the month (Table 3). 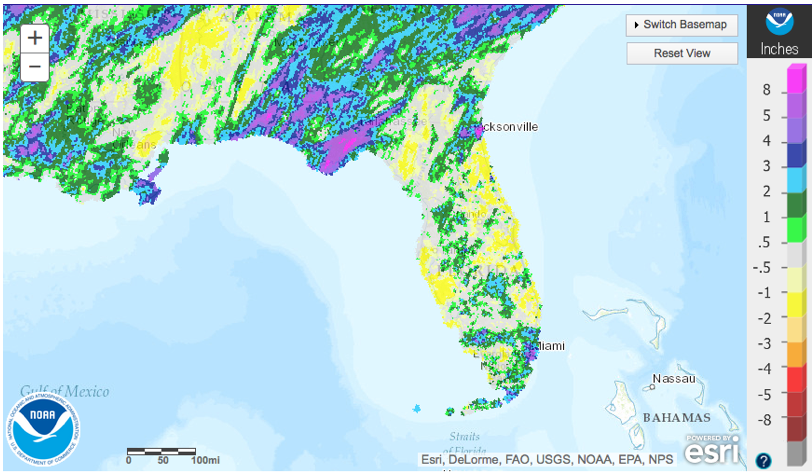 Based on current data and forecast models, the Climate Prediction Center (CPC) will keep the ENSO Alert System at an El Niño Advisory. El Niño conditions are present, and positive equatorial sea surface temperatures (SST) anomalies continue across most of the Pacific Ocean. According to the CPC El Niño conditions will continue through the Northern Hemisphere winter 2015-2016, gradually weakening through spring or early summer 2016. CPC predicts above normal temperatures for most of the state, and above normal precipitation across the state for December, followed by below-normal temperatures accompanied with above-normal precipitation for the remainder of the winter season. This El Niño remains very strong, on par with the landmark El Nino's of 1982/1983 and 1997/1998.  Such a strong El Niño is sure to disrupt climate and weather patterns across the State throughout the winter and early spring seasons, most notably with frequent storms and rain and cooler temperatures.  See this wrap-up of El Niño impacts on Florida on our website: http://climatecenter.fsu.edu/super-el-nino-poised-to-disrupt-weather-patterns.

There were a total of 122 severe weather reports made in Florida during November. A stationary front over the Panhandle on November 1st and 2nd brought heavy rain, flooding, high winds and storm damage in Holmes, Jackson, Jefferson, Okaloosa, Walton, and Washington counties, and a tornado touchdown in Washington County. Flash floods associated with this front caused numerous road closures, and several instances of wind damage to structures, downed trees, and damage to power lines were reported throughout the area. A second frontal system swept over the northern portion of the state on November 8th and 9th. Over 30 reports of heavy rain and flooding came in during that period from the Panhandle’s Bay, Franklin (Apalachicola), Jackson, Holmes, Liberty, Leon, Washington, and Walton Counties, and about 20 reports of heavy rain and flooding came from Duval County. On Nov 10th two separate funnel clouds were observed in Palm Beach County, but neither touched down, and reports of five waterspouts came from the Lower Florida Keys on November 12th and 13th. On the morning of November 15th multiple reports of heavy rains were made throughout Miami area. Strong winds associated with a passing front were reported on November 18th in Okaloosa and Franklin Counties. Several reports of downed trees and minor damage came in from Okaloosa, Wakulla and Gadsden on that day, and two tornadoes were spotted in Walton County in the early afternoon. Tidal flooding was reported November 25th in Delray Beach from locations in Palm Beach and Miami-Dade and November 26th in Broward County.

At the beginning of November, topsoil moisture levels were at predominantly (73%) adequate, though some (18% ) short and a few (8%) surplus values were reported across the state. Heavy rains at the end of October and in early November in Escambia, Holmes, Jackson, Jefferson, Okaloosa, Washington, and Walton delayed harvesting and planting of field crops for much of the month. At the beginning of the month, peanut harvesting had been completed at 94%, ahead of the 5-year average. By the end of the month, the completion was at 98%, behind the 5-year average. The rain in the Panhandle Counties hurt peanut quality. The heavy rains also negatively affected cotton harvest and quality. The combination of rainy and warm conditions in Jackson County caused cotton plants to put out new leaves, delaying the harvest, and some cotton to sprout in the boll in Jefferson County. In Escambia county cotton bales were sitting in ponding water. Soybean harvest was also delayed due to wet conditions. Hay cutting is underway in Orange and Seminole counties, but the quality is poor. Fruit and vegetable crops were irrigated throughout the month. Unseasonably warm weather in the early part of November caused blueberries in Bradford County to flower and produce fruit. Unseasonably warm weather throughout most of the month in southwest Florida caused sunburn on harvested fruit and loss of transplants, along with reduced yields and size of crops being harvested. Windy conditions in Palm Beach County resulted in scaring of tender vegetables such as peppers, eggplant, and tomatoes and twisting off of young seedlings. Livestock and pastures: permanent pastures across the State continued to decline seasonally. Statewide, the cattle condition was mostly good and pasture condition was fair to good. Winter forage benefitted from rains. The citrus growing regions were seeing unseasonably warm temperatures for most of the month, and groves in in the eastern edge of Orange County, nearly all of Osceola County, and the Indian River District were experiencing abnormally dry conditions and required irrigation. Growers have been spraying in attempts to lower the psyllid population to combat citrus greening. Harvest for the fresh market is well underway, with a few processing plants now open to process eliminations. 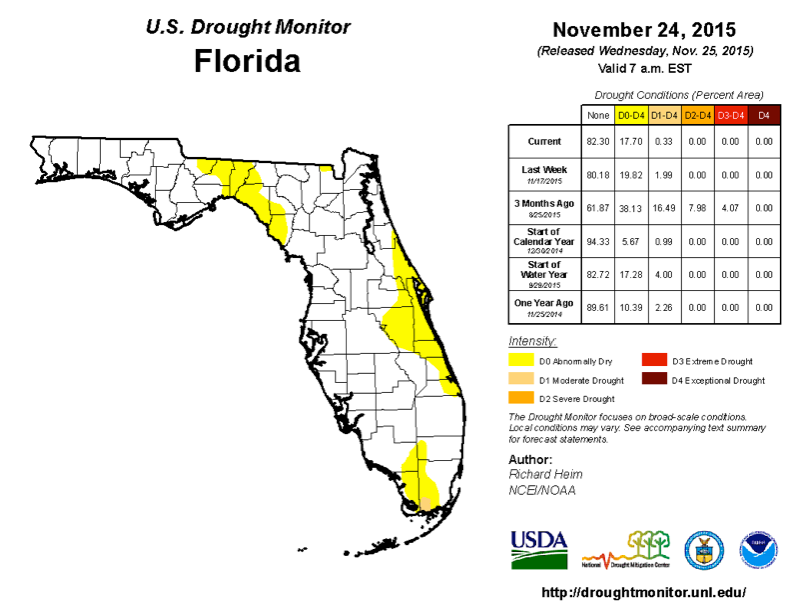 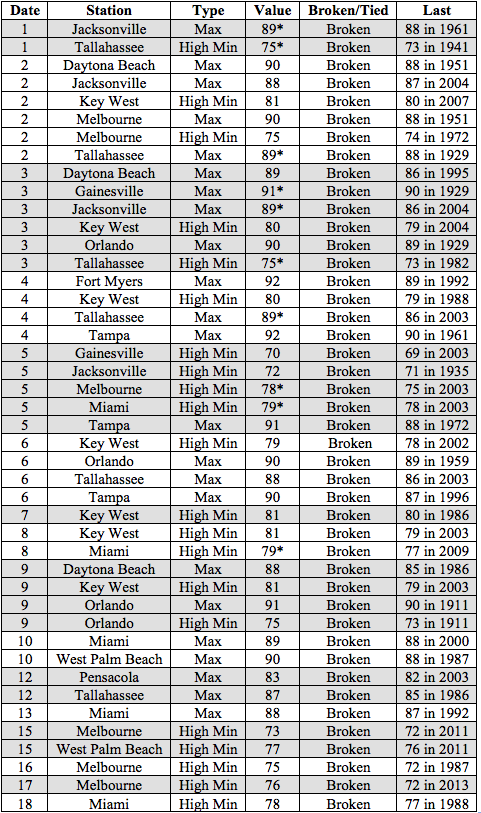