Rainfall totals varied across the state in November. Portions of the Big Bend, North Florida, and areas along the southeast coast and Florida Keys reported monthly rainfall totals above normal, while extreme northwest Florida and most of the southern Peninsula saw below normal totals (Figure 1). Departures from normal roughly ranged from -0.59” to 7.68” (Table 2 and Appendix 1), though some areas Florida saw rainfall totals that were as much as 5.00” below normal or nearly 8.00” above normal. November 2013 was the 4th wettest November on record in Fort Lauderdale, 7th wettest in Chipley, and 10th wettest in Miami. Numerous 24-hour precipitation records were broken for the month (Table 3), including one record that was tied that dates back to 1890 in Key West. 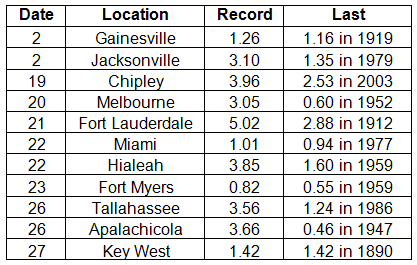 Figure 1: A graphical depiction of the monthly rainfall departure from normal (inches) for Novemer is given in the figure below (courtesy of NOAA, NWS). 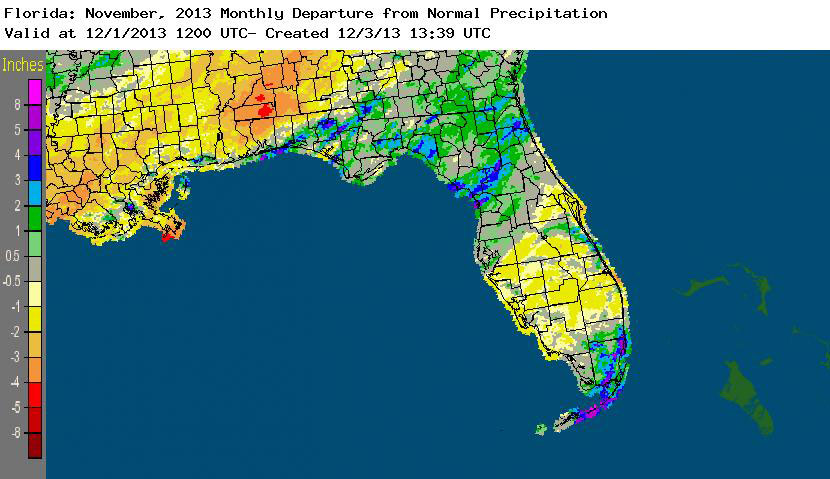 Hazardous weather events in November. Only 110 severe weather reports were made across the state in November. On the 5th, high winds with gusts up to 50 mph, not associated with thunderstorms, were reported along the Florida Keys. Flooding was recorded in Fernandina Beach and Mayport, due to the astronomical high tides on the 5th and 6th. The passage of a strong cold front on the 13th and 14th produced strong winds across the eastern part of the state. Wind gusts of up to 45 mph were reported in Jacksonville Beach, St. Augustine, New Smyrna Beach, Key Biscayne, and Key West. Non-thunderstorm winds knocked down trees and power lines in Flagler Beach, Palm Coast, and St. Augustine. Multiple reports of waterspouts were made from Miami Beach and Fort Lauderdale on the 20th. Urban and street flooding was seen in Hallandale and Hollywood on the 21st and in Miami Lakes and North Miami Beach on the 23rd. Another strong cold front pushed through the state on the 24th, bringing another round of strong winds (gusts up to 45 mph) to portions of the eastern coast of the state. On the 26th, an area of low pressure moved east across the Panhandle before moving up the Eastern Seaboard. Strong thunderstorms caused storm damage in Shadeville and Tallahassee, with multiple reports of trees down in both locations. A supercell thunderstorm produced an EF1 tornado in Stonemill Creek (Gulf County) that damaged trees and a few building along its 3-mile long path. The same supercell produced tree damage in Red Hill (Liberty County).

Table 4: Breakdown of storm reports submitted in Florida during the month of November (compiled from Southeast Regional Climate Center).

Agricultural and other climate related impacts. Topsoil and subsoil moisture levels were down from October, with only 55-60% at adequate or surplus levels at the beginning of the month. Winter grazing was planted in Gulf and Jackson counties, while peanut and cotton harvesting continued in parts of northern Florida. Vegetable harvesting continued in central Florida, while land preparation and planting continued in south Florida. Disease/pests were causing poor pasture conditions in parts of the state, though the cooler and drier weather also played a role in limiting pasture growth. Activity in the citrus growing region began to ramp up, with inconsistent sizes reported between oranges (golf ball to baseball sized) and grapefruit (larger than baseball), which were still smaller than normal. Dry conditions through the first part of November led to a decrease in soil moisture levels, both in topsoil and subsoil. Winter grazing was stressed in Jefferson County due to the lack of rain. Hay, sugarcane and vegetables continued to be harvested through central Florida. By the end of the month, topsoil moisture levels were 40% short and 45% adequate, and subsoil moisture levels had rebounded to 24% short and 61% adequate. Pasture and cattle conditions were fair to good (90% for both) statewide, despite the lack of rainfall. Widespread rain in the citrus growing areas helped, though the fruit size was small on early and midseason oranges.

When the Drought Monitor was released on the 5th of November, the dryness from the previous week’s map (October 29th) had expanded and was reported along the Gold Coast and Monroe County, including the Florida Keys. By November 19th, all of the counties on the East Coast were reporting abnormally dry (D0) conditions. The D0 was also recorded in and around Lake Okeechobee and in portions of northern Escambia County. Rains in South Florida between the 19th and 26th eased the dryness along the immediate East Coast from Indian River through the Florida Keys. Throughout the entire month, the D0 conditions in North Florida were present, and even above normal rainfall for November in some of the area was not enough to ease drought concerns in that portion of the state. The CPC forecast for the next three-months is predicting below normal rainfall, so the chance of seeing more dry conditions, and potentially drought, introduced into the state remains high.

Figure 2: Drought conditions in Florida as of November 26, 2013 (courtesy of U.S. Drought Monitor). 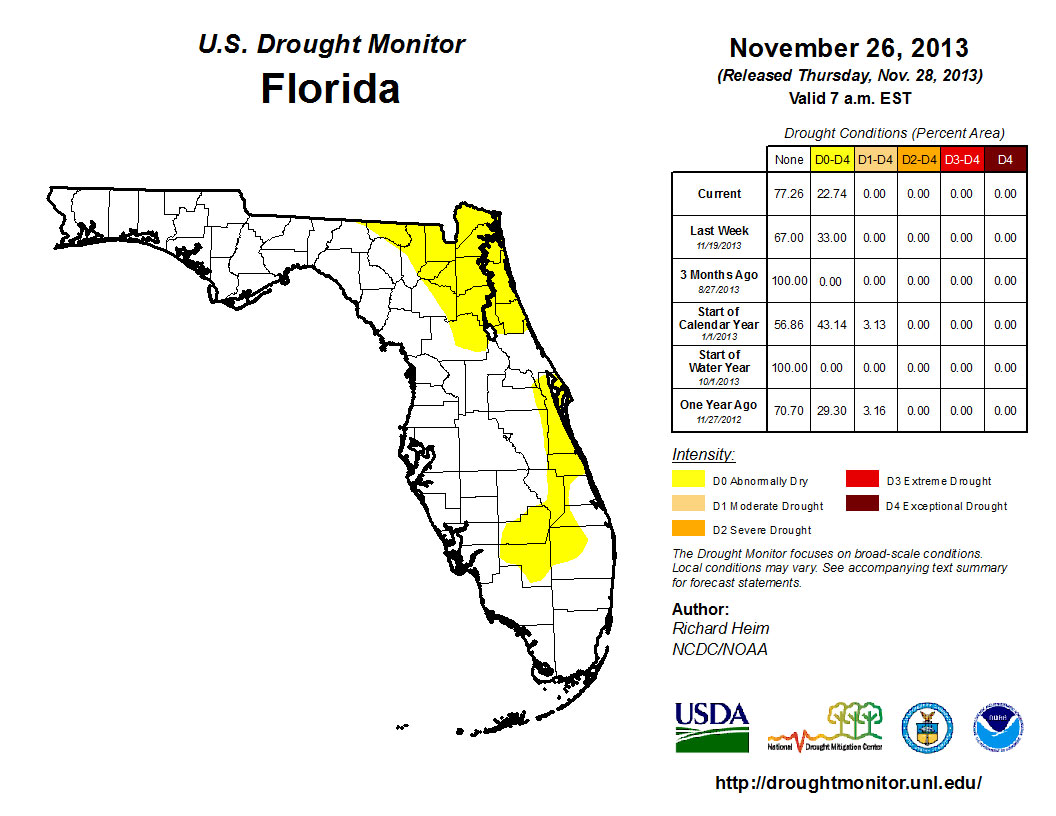 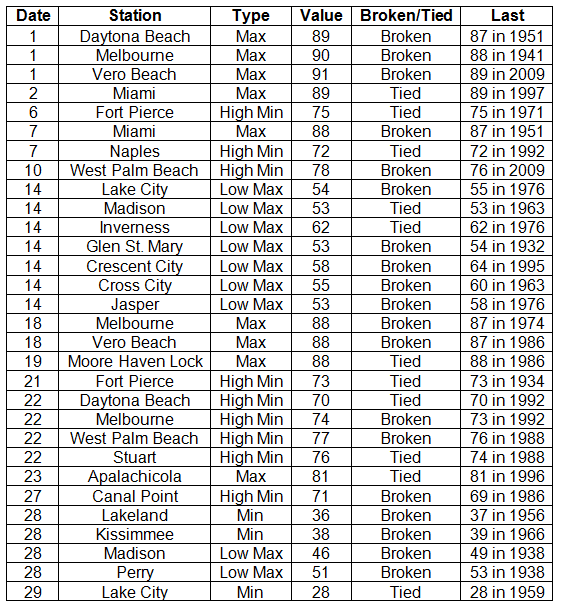