Rainfall totals were below normal across the state in November. Rainfall totals across the state were well below normal this month (Table 2), with departures ranging from -1.46” at Tampa to -3.52” in Tallahassee. The late fall to early spring is typically the second wet season for the northern part of the state, and rainfall totals from November reflect the lack of these ‘winter rains’. November 2012 was the 4th driest November on record at Tallahassee. The dry conditions across the state (Figure 1), especially in the Panhandle and northeast Florida, prompted the National Drought Monitor to reintroduce drought designations for portions of the state. Due to the fact there were only 9 precipitation records broken in November, and only one of them was over 0.50”, they will not be highlighted this month. 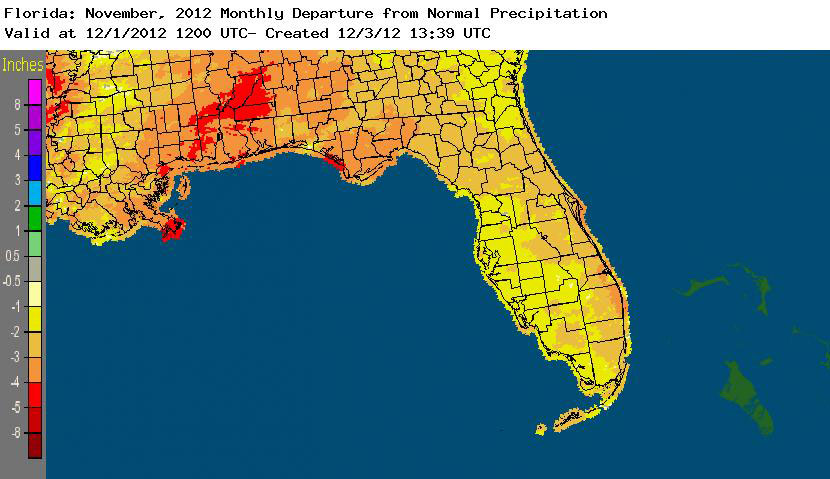 ENSO-neutral conditions continue in the Pacific. As of November 26th, the Climate Prediction Center (CPC) has discontinued the El Niño Watch they issued earlier this year as neutral ENSO conditions continue to be reported for the equatorial Pacific. Equatorial sea surface temperatures (SST) are above average across much of the Pacific Ocean. ENSO-neutral conditions are expected to continue through the winter of 2012-2013. The Climate Prediction Center (CPC) predicts normal temperatures for the northern part of the state and below normal temperatures for the peninsula; they are also predicting above normal precipitation in the western Panhandle and north Florida through February.

Hazardous weather events in November. November was an extremely quiet month for severe weather across the state with only 16 severe weather reports. Dense fog was reported by law enforcement officials at the Seminole Indian Reservation in Collier County, as well as other locations in Collier County, during the early morning hours of November 4th. Astronomically high tides were recorded along the northeast coast, from the Florida/Georgia line to St. Augustine, from November 14 to 17. Tides were reported between 0.5’ and 1’ above normal tide levels. Visibility was reported at .25 mile at the Naples Municipal Airport, while other parts of the county had zero visibility. On the morning of the 17th, a trained NWS spotter saw a waterspout offshore of Pompano Beach, FL. The Forest Service reported a wildfire on Nov 19th near Interstate 10 in Osceola National Forest near the Baker and Columbia county line. By the 21st, the fire had burned about 45 acres.

Table 3: Breakdown of storm reports submitted in Florida during the month of November (compiled from Southeast Regional Climate Center).

Agricultural and other climate-related impacts. At the beginning of the month, good progress was being made with the harvesting of hay, cotton and peanuts across the state. Vegetable producers were preparing fields for planting potatoes. Sugarcane planting/harvesting was on schedule and the citrus region remained drought free. The quantity and quality of grass had declined seasonally, though the majority of pastures across the state were in good condition. Fall calving began and cattle conditions were fair to good. Peanut harvesting was nearly complete and cotton harvesting continued through the middle of the month. The last bit of hay was being cut in some counties before the first frost/freeze of the season could impact the crop. The dry weather pressured pasture and winter grazing establishments, as parts of the Panhandle were unable to plant winter forage due to dry soils. Toward the end of November the dry weather had caused some late cotton bolls to open prematurely in northwestern Florida, while the dry and mild weather proved to be beneficial for vegetable producers. Most pasture conditions were fair to good, though pasture conditions continued to deteriorate in portions of northern Florida.

The week after the October Climate Summary was released, the authors of the National Drought Monitor, with insight from a variety of contributors, decided to start adding the ‘dry conditions’ designation back to Florida. After about 2 months of being drought free, parts of northern Leon, Gadsden, Walton, and Holmes counties saw a reintroduction of dry conditions as the drought in Georgia and southeastern Alabama spread across the state line. By the 13th, all of the northern parts of Panhandle counties that share a border with Alabama or Georgia were labeled as dry. And as the dry month persisted, and with little to no rain falling over these already dry areas, moderate drought was introduced back into the state by the end of the month. Portions of central and south Florida remained drought free during November, as the fall and winter months are usual drier than the northern tier of the state.

Figure 2: Drought conditions in Florida as of November 27, 2012 (courtesy of U.S. Drought Monitor). 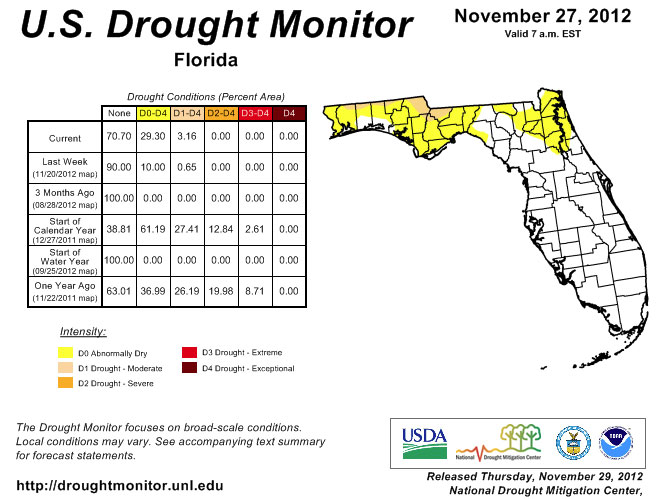