November rainfall totals generally near or below normal. Rainfall totals for November were slightly below normal across most of the state (Table 2). However, daily precipitation records were set at Vero Beach (2.63" on the 3rd), Gainesville (1.21" on the 25th), and Key West (5.05" on the 26th). The monthly rainfall departure from normal at Key West (3.99") resulted mainly from the one-day record total.

A graphical depiction of the monthly rainfall departure from normal for November is given in the figure below (courtesy of NOAA NWS). Departures range from over three inches above normal in the Keys and isolated locations in north central Florida to more than three inches below normal at some locations near the Atlantic coast. 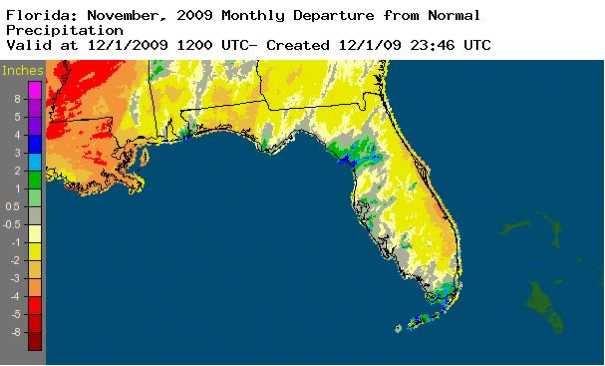 Hazardous weather. After reaching Category 2 hurricane intensity in the Gulf of Mexico, Ida made landfall as a tropical storm just to the west of the Florida/Alabama border on November 10. Ida was the second latest hurricane to move through the Gulf of Mexico and affect North Florida. Although wind gusts greater than 40 miles per hour were observed at Pensacola on the 10th and storm total rainfall was greater than four inches at several places in northwest Florida, overall impacts of Ida were minimal.

Agricultural and other impacts. After a brief delay due to rainfall from Tropical Storm Ida, drier weather allowed the peanut harvest in the North to be near completion by the end of the month. Rainfall from Tropical Storm Ida improved pasture soil moisture in the Panhandle, but cooler temperatures slowed growth. Generally dry weather across the Peninsula allowed planting and some harvesting of vegetables in central and southern Florida.