Climate Summary for Florida - May 2018

Rainfall totals in May were well above normal for most of state. Rainfall totals in May 2018 were well above normal across  the state, except for the extreme western Panhandle (Figure 1). Departures from normal at major reporting stations ranged from -0.45” in Pensacola to +11.25” in Miami (Table 2 and Appendix 1), although localized parts of the state saw rainfall totals that were over 15’’ above normal. For most stations in peninsular Florida this was among the top 10 wettest Mays on record, with monthly totals exceeding the normal values 3- to 4-fold. It was the wettest May on record for Key West, breaking the previous record set in 1904 by over an inch. Based on preliminary rankings, to be officially confirmed later this week, this was also the wettest May on record statewide. A few 24-hour precipitation records broken for the month (Table 3).

Figure 1: A graphical depiction of the monthly rainfall departure from normal (inches) for May is given in the figure below (courtesy of NOAA, NWS) 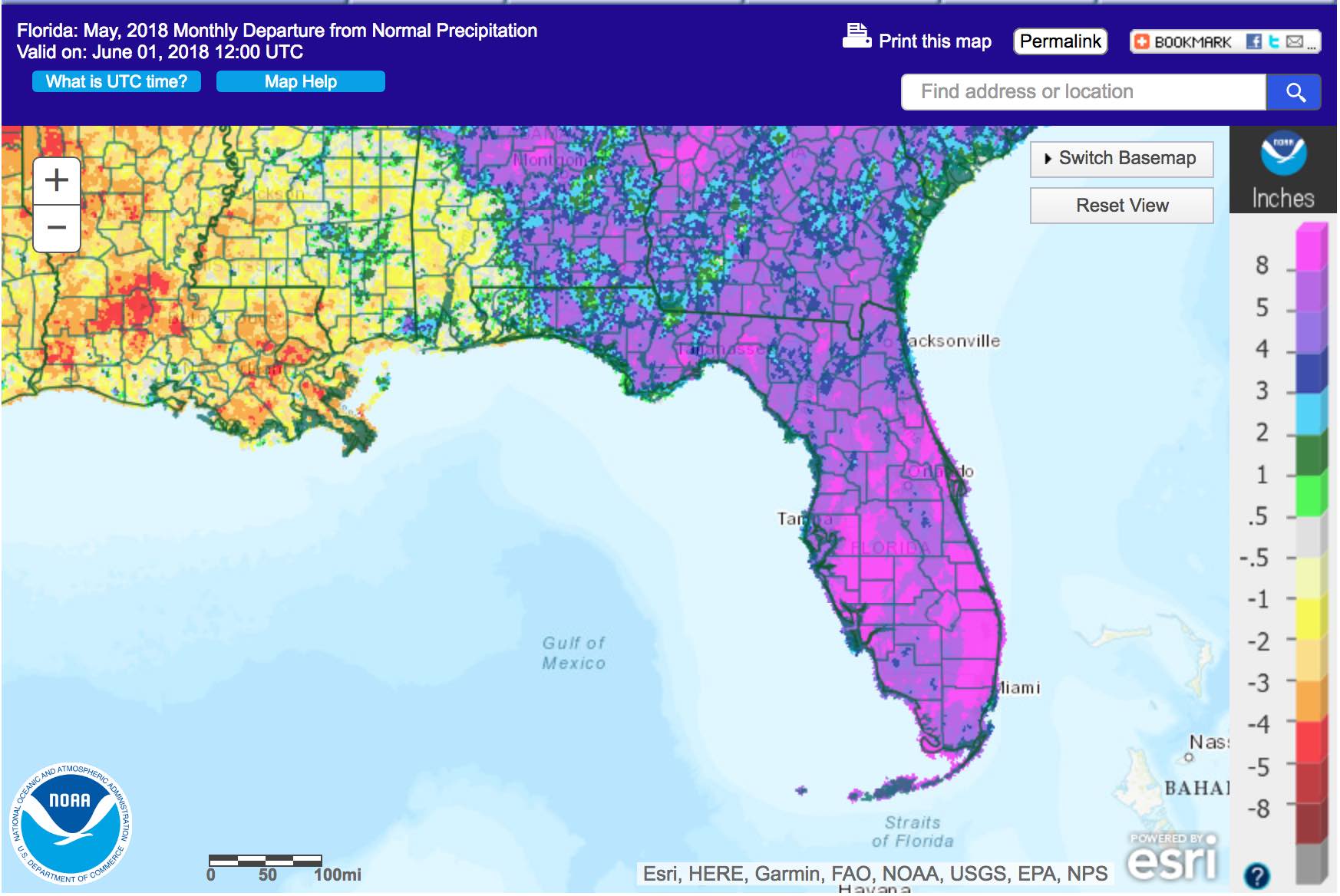 Based on current data and forecast models the Climate Prediction Center (CPC) has issued a Final La Niña Advisory. ENSO-neutral conditions are currently present, with sea surface temperatures (SST) near normal across most of the Pacific Ocean. ENSO-neutral conditions are favored to persist until fall of 2018, with a possibility of El Niño by winter of 2018.  The CPC seasonal outlook favors above-normal temperatures and above-normal precipitation through August 2018.

There were a total of 337 hazardous weather events logged to the National Weather Service Local Storm Reports Database for the state during May 2018. The majority of these involved high winds and heavy rain (see Table 4 for a breakdown).

A tropical disturbance entering the Gulf of Mexico from the Caribbean Sea developed into Subtropical Storm Alberto on May 25th, making for an unusually early start to the 2018 hurricane season. In anticipation of impact, a state of emergency was declared for the state, and evacuations orders were issued in some coastal areas. At its peak strength, Alberto had sustained winds of 65mph, weakening to 45mph as it made landfall in Bay County on the 28th. Storm surges were reported in Franklin and Wakulla Counties, with some beaches and roads going underwater. Two tornadoes were recorded during the passage of Alberto, one in Martin County on the 27th, and near Homestead in Miami-Dade on the 29th. Tropical storm conditions were felt in Bay, Dixie, Franklin, Gulf, Homes, Leon, Okaloosa, Wakulla, and Walton counties. High winds were felt throughout the state. The largest rainfall amounts after landfall were reported from Escambia, Okaloosa and Walton Counties.

Other significant weather events for the month included a lightning strike on the 16th that killed one person and injured two others working on a farm in Parkland, Palm Beach County. Multiple swimmers required rescue from rip currents near Cocoa Beach on the 5th, with one reported fatality.   Several swimmers were successfully rescued from rip currents near Destin on the 18th and near Boca Raton on the 20th.

The heaviest rains for the month were measured on the 20th in Broward and Palm Beach Counties, with 6-hour rainfall totals up to over 8”.

Table 4: Breakdown of storm reports submitted in Florida during the month of May (Compiled from Iowa State University/Iowa Environmental Mesonet.) 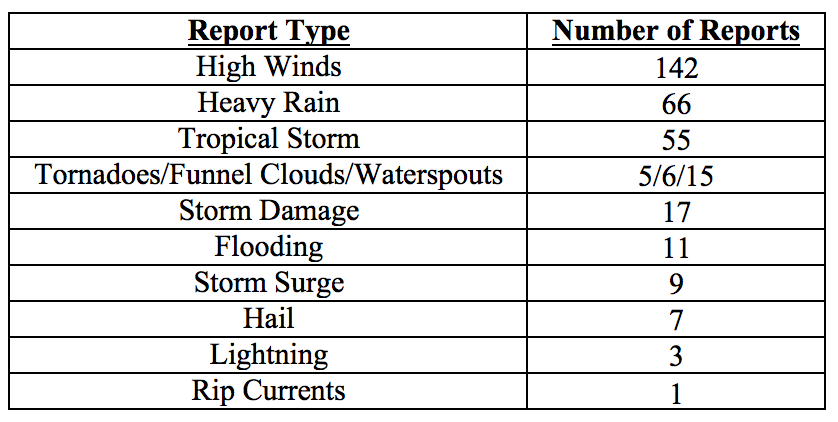 At the end of April about half of the state’s area was drought free, including most of the Panhandle to north-central Florida. Most of central to southern Florida was experiencing either abnormally dry (D0) conditions or moderate (D1) to severe (D2) drought.  Conditions were gradually improving during the first half of the month and drought was completely eliminated throughout the state following the heavy rains brought about by subtropical storm Alberto and the associated circulation.

At the end of the month, Lake Okeechobee water levels were at 14.19 ft., which is about a foot above normal for this time of the year.  Significant discharges are being made in an effort to lower lake levels in anticipation of the wet summer season.

At the beginning of May, most topsoil moisture levels were either adequate or short, with some very short values present as well. Dry conditions in the first half of the month were problematic for some pastures and for planting of row crops, and citrus groves required regular irrigation. As rainy conditions set in across the state starting on the 14th of the month, citrus irrigation was discontinued. Fruit and vegetable harvest in many areas suffered from excessive rain. Planting and harvesting of row crops was made difficult by muddy fields. Some low-lying or poorly draining pastures were flooded, but otherwise pasture quality responded very well to the rain. Cattle across the state are in mostly good condition.