Climate Summary for Florida - May 2016

Rainfall totals in May were varied across the state. Rainfall totals varied across the state. The Panhandle received below-normal precipitation while Peninsular Florida received above-normal amounts (Figure 1), a pattern opposite of that in the preceding month. Major reporting stations registered departures from normal ranging from -2.22” in Pensacola to +4.56” in Melbourne (Table 2 and Appendix 1), although localized parts of the state saw rainfall totals that were as much as 3” below normal to more than 8” above normal (Figure 1). May 2016 was the wettest on record for Vero Beach and the 4th wettest for Melbourne. There were a small number of 24-hour precipitation records broken for the month (Table 3).

Figure 1: A graphical depiction of the monthly rainfall departure from normal (inches) for May (courtesy of NOAA, NWS). 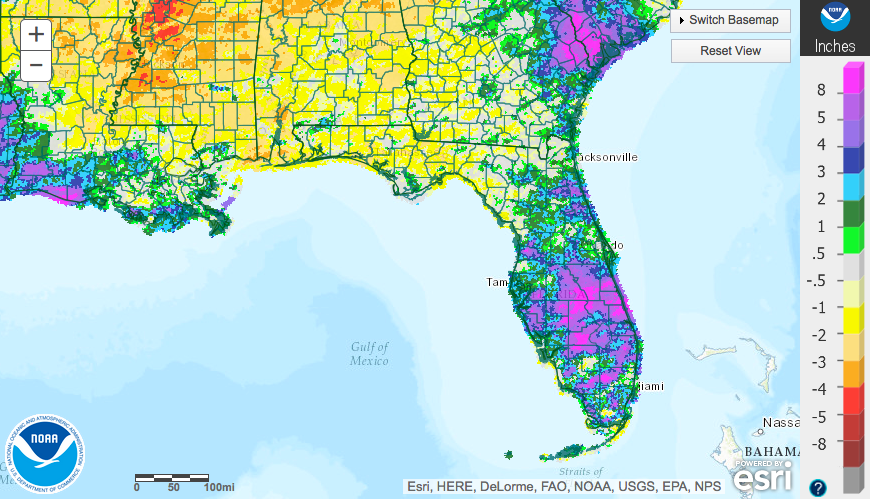 El Niño Conditions in the Pacific Are Weakening.

Based on current data and forecast models, the Climate Prediction Center (CPC) the ENSO Alert System is currently set at El Niño Advisory/La Niña Watch. El Niño conditions are weakening, and positive equatorial sea surface temperatures (SST) are diminishing across the equatorial Pacific Ocean. Conditions are favoring a La Niña development starting in the summer of 2016, and there is approximately a 75% chance of La Niña during the fall and winter of 2016-2017.

There were a total of 273 severe weather reports made in Florida during May (see Table 4). The majority were reports of high winds (128 reports) and storm damage (66 reports). As in the previous month, hail reports were frequent (33 reports).

Table 4: Breakdown of storm reports submitted in Florida during the month of May (Compiled from Southeast Regional Climate Center.)

At the end of April and beginning of May, top-soil moistures were mostly adequate (56% of values) to short (32%), representing a drying from the preceding weeks. Mid-month, overall soil moisture levels were temporarily improved, but towards the end of the month, they returned back to a similar distribution. Peninsular Florida, which had been dry in April, was relatively wet in May, and conversely, the Panhandle, which was relatively wet in April, was relatively dry in May. The rainfall distribution affected field activities and conditions. Cotton, peanut, and corn planting was progressing quickly in Washington, Okaloosa and Santa Rosa Counties where conditions were favorable. In areas with insufficient rainfall, planting schedules and planted corn conditions have been adversely impacted by insufficient soil moisture levels due to warmer temperatures and lack of rain. Farmers in areas with low soil moisture levels are waiting for more moisture to resume planting. Because of dry soil conditions, planting of peanuts was halted in Jackson and Holmes Counties, however overall peanut planting is 87% complete, ahead of the 5-year average. Warmer temperatures and less precipitation along the Panhandle initially benefited areas where fields and pastures had been previously flooded, but continued lack of precipitation has started worsening conditions. Light rains in previously dry areas in Peninsular Florida benefitted some areas that were previously somewhat dry. Heavy rains in portions of the central and southern parts of the state temporarily flooded but have begun to dry out. The relatively dry weather early in the month required irrigation of citrus groves, but this need was eased by beneficial rains later in the month. Dryer weather in Okaloosa County helped farmers control strawberry diseases. Completion of sugarcane harvesting was achieved over a month later than usual because of excessive rain rains in Palm Beach County, St. Lucie, Glades and Hendry Counties.

At the beginning of May, 93.4% of the state was drought-free, with abnormally dry conditions affecting portions of Levy, Marion, Alachua, Putnam, Clay, St. Jones, and Duval Counties. These conditions persisted until removed by mid-month rains in the region. As of the latest US Drought Monitor report, issued on May 24th, the entire state is currently drought-free. Water levels in Lake Okeechobee remain high, following heavy rains in Central Florida. The water level in the lake is currently at 14’ 39’’, which is above the average for this time of the year.