Climate Summary for Florida - May 2013

Average temperatures varied across the state in May. Average temperatures varied during May across the entire state (Table 1 and Appendix 1). Departures from normal ranged from -1.9˚F to 1.0˚F across Florida, though most locations in the state had below normal temperatures. May 2013 was the 3rd coldest at Jacksonville, the 6th coldest in Gainesville, and the 9th coldest in Pensacola. At the beginning of the month, many low maximum and minimum temperatures were tied or broken, with a record at Plant City on the 7th that tied with the previous record set back in 1898 (Appendix 2). By the end of the month, more high minimum and maximum temperatures were either tied or broken, as the weather pattern returned to a typical regime for the beginning of June.

Table 1: May average temperatures and departures from normal (°F) for selected cities.

Rainfall totals varied across the state in May. Rainfall totals across the state varied in May (Table 2). Portions of northeast and south Florida, along with localized places in the interior of the peninsula, recorded above normal rainfall (up to and over 8 inches), while the Panhandle and Big Bend regions had 2 to 5 inches below normal precipitation (Figure 1). May was the 6th wettest on record at Fort Lauderdale (Appendix 1) and 7th wettest at Key West, while it was the 4th driest at Tallahassee and the 13th driest May on record at Pensacola. There were a few precipitation records broken during the month (Table 3), with one of those records dating back to 1882. Despite the excessive rainfall that eased drought in some areas, the spring dry season led to a re-introduction of drought classifications along the Panhandle. 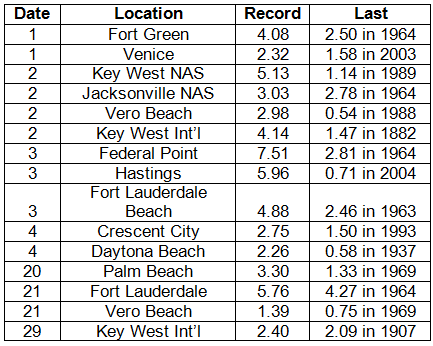 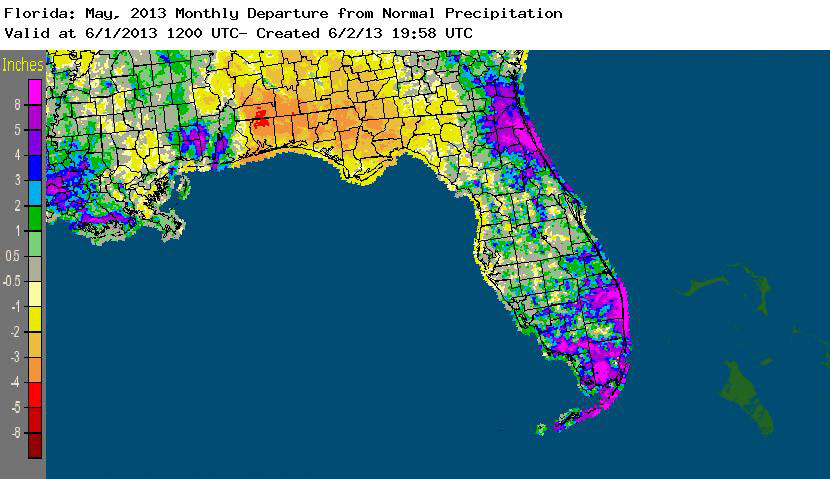 ENSO-neutral conditions continue in the Pacific. As of June 3rd, neutral ENSO conditions continue to be reported for the equatorial Pacific. Equatorial sea surface temperatures (SST) are near average across the western and central Pacific Ocean and below average in the eastern Pacific. ENSO-neutral conditions are favored to continue through summer 2013. The Climate Prediction Center (CPC) predicts above normal temperatures for the state and they are also predicting above normal precipitation for the Panhandle and normal precipitation for the rest of Florida through August.

Hazardous weather events in May. May was an active month for severe weather, with 249 storm reports made during the 31-day period, including nearly half a dozen weather related fatalities. On the 1st – 3rd, there were numerous reports of high winds, flooding/heavy rains, and storm damage including hail, along the Florida East Coast from Jacksonville through the Florida Keys. Waterspouts were reported offshore of Bal Harbour and on Lake Okeechobee; while and EF0 tornado was confirmed to have caused damage in Boca Raton. Rain totals were as high as 7 inches in some locations, and wind gusts up to 45 mph were reported in multiple locations. The storm system produced rough surf conditions along the coast, with 5-foot breakers and some minor beach erosion. The Jacksonville and St. Augustine area saw a round of severe weather that produced a tornado near Elkton, FL, on the 4th, along with pea to dime sized hail, heavy rains and uprooted trees. Two separate storms produced hail on the 9th in Hialeah and Jupiter, FL. Early morning reports on the 11th of a waterspout near Miami Beach were a prelude to the storm reports that would come in later that day from Jacksonville, Port St. Lucie and Fort Lauderdale. More waterspouts were reported on the 13th along the Lower Keys. Dangerous rip currents claimed the lives of a 22-year old male who became caught in the strong rip current and a 62-year old man who rescued a 10-year old boy who got caught in the current at Kathryn Abbey Hanna Park on the 14th and 15th. The Jacksonville Beach Life Guards saved 3 people from the rip currents on the same day (15th). Severe weather on the 18th and 19th caused damage in Jacksonville, Gainesville and Orlando, with nickel-sized hail reported with high winds and heavy rains. Heavy rains and flooding were reported in Boca Raton, Miami Beach and Boynton Beach on the 20th, while, in portions of the state west of I-75, reports of pea to quarter sized hail accompanied reports of 50 mph winds and storm damage. Lightning struck the runway at the St. Augustine Airport and damaged a 5x6 foot section of the runway on the 21st. Also on the 21st, the greater Tampa area had reports of dime-sized hail and minor street flooding associated with a strong storm that moved over the area. A funnel cloud was reported over New Smyrna Beach on the 23rd. Over Memorial Day weekend, a 15-year old drowned after being caught in a rip current near Dania Beach, FL, and a 51-year old woman was killed after being struck by lightning on Belleair Beach, FL, on the 28th. Another rip current related death was reported on the 31st near Boynton Beach after a 17-year old male drowned from strong rip currents.

Table 4: Breakdown of storm reports submitted in Florida during the month of May (compiled from Southeast Regional Climate Center).

Agricultural and other climate-related impacts. Peanuts, corn, cotton and a variety of vegetables continued to be planted across the state at the beginning of the month. South Florida growers harvested blueberries, cabbage, sweet corn, green beans and sweet potatoes, while the sugarcane harvest ended for the year. Drought conditions continued to hamper forage growth, though rains had flooded pastures in some portions of the state. Most packinghouse had closed toward the middle of the month. 90% of the cattle in the state were reported between fair and excellent condition. Potatoes began to be harvested in north Florida, snap beans and carrots were harvested in central Florida, and growers in south Florida harvested a variety of vegetable and specialty crops. Fields were being cleaned up in preparation for the summer fallow. By the end of the month, topsoil and subsoil moisture levels in the northern part of the state had declined, with the majority of the reports indicating more that 50% were short to very short. In southern parts of the state, rainfall totals were above normal, as harvesting of specialty crops continued and packinghouses and processing plants opened.

At the beginning of May, the peninsula was under drought classifications that ranged from abnormally dry (D0) to severe drought (D2), with the worst parts of the dryness in portions of Citrus, Sumter, Lake, Marion, Levy, and Putnam counties. May is typically one of the driest months across the entire state, with the statewide precipitation average of 3.86” for the month (based on 1895-2012). Widespread rains in the northeastern counties and along the east coast during the first part of the month helped ease drought conditions in most of the area, where drought had been lingering since the beginning of the year. Rain continued to fall over most of the same area during the remainder of the month, while the Panhandle and Big Bend regions remained dry. By the end of the month, the lack of rainfall in the northern part of the state prompted the re-introduction of dry conditions to Escambia, Santa Rosa, Okaloosa, Walton, Washington, Holmes and Jackson counties. 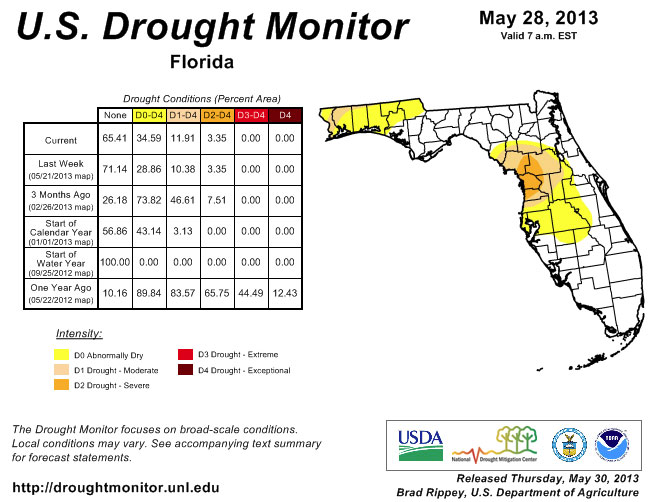 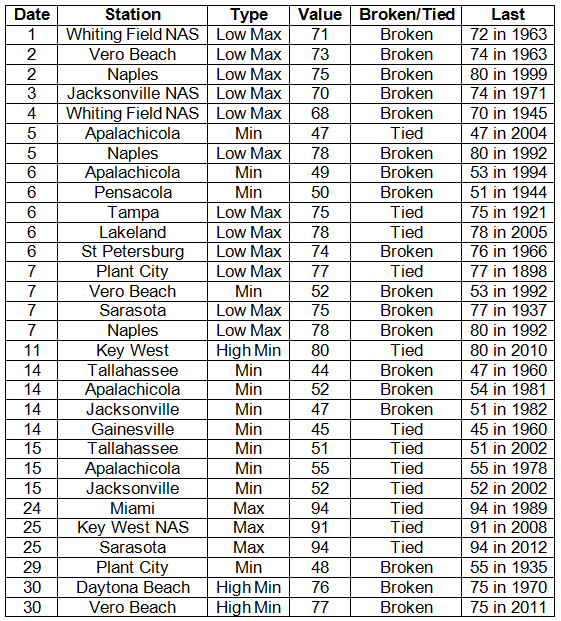