Climate Summary for Florida - May 2012

Average temperatures varied across the state in May. Average temperatures were slightly below normal to above normal for May across the entire state (Table 1 and Appendix 1). Departures from normal ranged from -0.3˚F at Key West to 3.9˚F at Pensacola. May 2012 was the warmest on record (about 65 years of data) at Pensacola and was the 5th warmest May on record at both Tallahassee and Tampa. Tallahassee broke a record high on the 26th with a reported maximum temperature of 100˚F. The month saw numerous records broken (Appendix 2), both maximum and minimum temperatures.

Rainfall totals varied statewide in May. Rainfall totals varied statewide in May (Table 2). Most stations saw slightly below normal rainfall, while Key West, Miami and Jacksonville saw above normal rainfall totals for the month. May 2012 was the 7th wettest on record at Miami and the 5th wettest May at Jacksonville. Rainfall was also above normal at Fort Lauderdale and Gainesville (Appendix 1). On the 22nd, Miami reported a record rain event of 9.70” in a 24-hour period, and 4.40” of that total fell in one hour (Table 3). From May 26 to 29, Tropical Storm Beryl impacted the state, dumping an estimated 2.00” to 10.00” on parts of northeast and north central Florida (Figure 1). Areal patterns of monthly rainfall relative to normal are depicted in Figure 2. 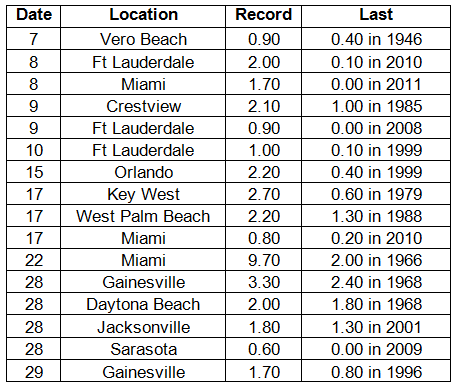 Figure 1: A graphical depiction of radar-estimated rainfall amounts from May 24 to 30, during the time that Tropical Storm Beryl passed through the state (courtesy of NOAA, NWS). 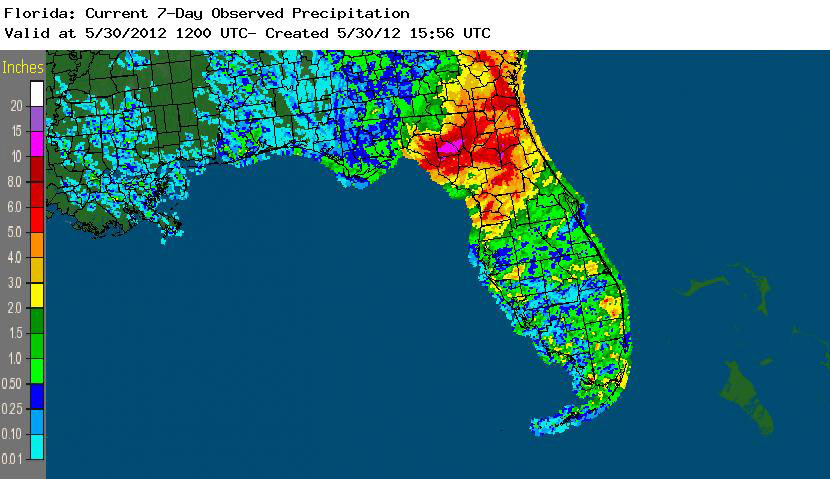 Figure 2: A graphical depiction of the monthly rainfall departure from normal (inches) for May is given in the figure below (courtesy of NOAA, NWS). 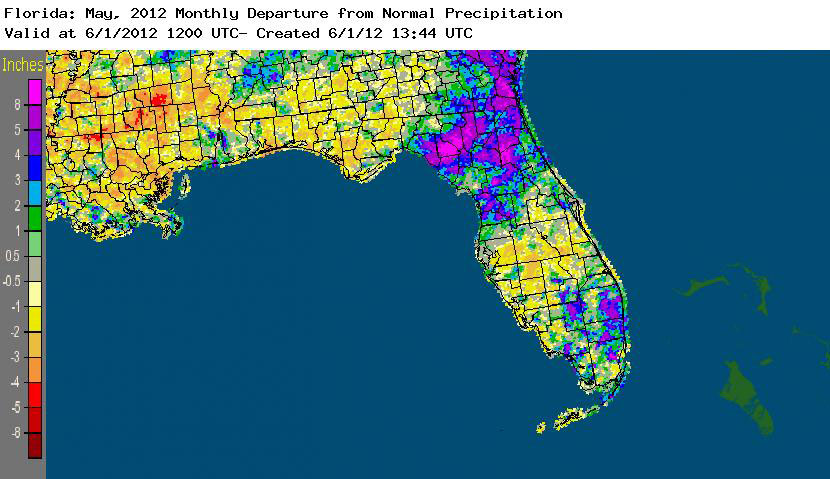 ENSO-neutral conditions have returned in the Pacific. The transition from La Niña to neutral ENSO conditions has happened along the equatorial Pacific. Equatorial sea surface temperatures (SST) are near average in the central Pacific but are above average in the far eastern Pacific Ocean. ENSO-Neutral conditions are expected to continue in the Northern Hemisphere through Summer 2012. The Climate Prediction Center (CPC) continues to predict warmer than normal temperatures and is now predicting normal precipitation through August. There is a chance that the equatorial Pacific will warm enough that an El Niño could set up by the winter of 2012.

Hazardous weather events in May. May was a very active month for severe weather in Florida.

Severe weather - A variety of hail reports were made on the 6th, with marble sized hail reported in Callahan, 0.50” seen in Lake City and 1.00” hail in Luraville. Storm damage was reported along the Panhandle from Vernon, FL, to Jacksonville, FL, including Tallahassee. There were numerous reports of trees and power lines down, along with high gusts as high as 50 mph. Three waterspouts were reported over the St. George Island Bay. May 8 was another active day with storm damage, high winds and hail reported along the southeast coast. A house was struck by lightning in Port St. Lucie. 4.37” of rain was reported at the NWS Miami office on the campus of Florida International University on the 8th, and additional reports of heavy rains on the 8th caused flooding in low-lying areas. A storm on the 9th caused damage from high winds and reports of hail, as large as 1.25”, were made from around Key Biscayne and Miami Beach. On May 10, multiple reports of waterspouts were made off the coast of Key West and Key Largo. A waterspout moved on shore and an EF-0 tornado was reported in Escambia County, near Johnsons Beach, on the 12th. Heavy rain, high winds and hail were reported in the Jacksonville area on the 14th and 15th and along portions of the east coast on the 15th and 16th. A widespread hail event took place on the 17th, with reports of hail from Merritt Island, Deland, St Augustine, Middleburg, and near Palatka; which were accompanied by reports of high winds and storm damage. Another round of severe weather went through the southeast coast on the 18th, with penny to quarter sized hail reported. Downed trees and high winds were also reported in Doral and Hialeah, where a wind gust of 60 mph was estimated. Unrelated to these storms, a young man was injured by a lightning strike near Lakeland, FL, on the 18th. More waterspouts were reported around the Keys on the 19th, while inland locations around St. Lucie and Okeechobee saw hail. A possible tornado was reported near St. Petersburg, FL, on the 19th, as part of a roof was torn off a building and tossed onto a car adjacent to a motel. Heavy rain and flooding were reported in Doral, West Miami, FIU Campus, and Sweetwater on the 22nd. The official gauge at the Miami International Airport recorded 4.40” of rainfall in one hour during the event. These rains were a precursor to Tropical Storm Beryl. On the same day, a severe thunderstorm west of Tallahassee produced multiple reports of hail from Bristol, Hosford, and even Torreya State Park. On the 24th, high winds were reported along the southeast coast from Fort Lauderdale to Key Largo. Storm damage and hail were reported with the high winds (recorded at over 40 mph). After Beryl exited the state (see below for more information on Beryl), more waterspouts were sighted around portions of the lower Keys on the 30th, and thunderstorms produced hail and storm damage across parts of the Panhandle on the 30th and 31st.

Wildfires - On May 5, Moss Bluff Fire had spread from 20 to 205 acres. Reports on May 6th indicated that the Bladwin Bay Wildfire had spread to 100 acres and the County Line Fire flared back up and had burned a total of 35,000 acres. Heavy smoke from wildfire between Gainesville and Lacrosse closed parts of a local road on May 25th, and the wildfire spread from 300 acres to 1500 acres. On the 26th a small six-acre wildfire near Summerfield burned several non-residential structures. At the end of the month, there were an estimated 60 wildfires that were still active on 10,000 acres across the state.

Tropical Storm Beryl - Tropical Storm Beryl made landfall near Jacksonville Beach, FL, in the early morning hours of May 28. Prior to landfall, the tropical storm was responsible for strong rip currents off the east coast of the state. Eight individuals had to be rescued on the 26th after some adults tried to save some children on boogie boards that had been pulled out to sea. One of the individuals was transported to a local hospital. As the storm made its way closer to the Florida shoreline, multiple reports of near-tropical storm wind gusts (55 – 70 mph) were made along the coast on the 27th. The Mathews Bridge in Jacksonville was closed due to the high winds. Beryl quickly weakened to a tropical depression after landfall, but due to a weakening ridge to the north of the storm, the storm slowed down and dropped heavy rainfall over parts of northeast and north-central Florida. Rainfall ranged from 2.00” to 7.00”, though radar estimates show a rainfall maximum (over 10.00”) over parts of Lafayette and Suwannee counties. Flooding occurred in numerous locations where the heaviest rain fell from Beryl. Even as the storm lifted to the north, the outer bands of Beryl continued to dump heavy rain and high winds and spawned a few tornadoes. Dangerous surf conditions were still present over Memorial Day weekend, as lifeguards along Florida’s east coast rescued swimmers from the water, and one Orlando teenager lost his life.

Agricultural and other climate-related impacts. At the beginning of the month, soil conditions were dry and some of the wheat fields in the state showed disease. There was a light volume of watermelons and blueberries being harvested. Most of the pastures statewide were in poor to fair conditions. Due to the unseasonably warm weather, some of the wheat fields did not develop grain heads. Irrigated crops were fairing well, and livestock had to be giving hay and supplements. The drought conditions continued to worsen. By mid-month, poor topsoil and sub-soil conditions were being reported. Some moderate rainfall helped portions of the state, but some areas still had limited grass growth. In Orange County, some wells, lakes and stock ponds were depleted due to the drought. At the end of the month, there were slight improvements in some areas. Orange production was nearly complete, as the harvesting of other vegetables came online.

Drought conditions worsened during the month of May, until the end of the month when Tropical Storm Beryl impacted the state. Prior to Beryl’s landfall, the area between Jacksonville and Perry was still listed as in exceptional drought. Portions of the Panhandle went from moderate to severe, while parts of central Florida were newly designated as being in extreme drought. There were areas of improvement during the month, prior to Beryl. Heavy rains in south and southeastern Florida eased drought conditions, with at least 1 to 2 categories of improvement in the drought. After Beryl’s landfall near Jacksonville at the end of the month, improvements were seen in the northeast and north central parts of the state, where the exceptional drought designation was dropped to extreme. The area received anywhere from 2.00” to 6.00” from the storm. Some portions of Lafayette and Suwannee counties saw over 10.00” of rain from Beryl. While there was improvement in the drought situation in some parts of the state, other areas of the state continued to deal with moderate to extreme drought conditions. 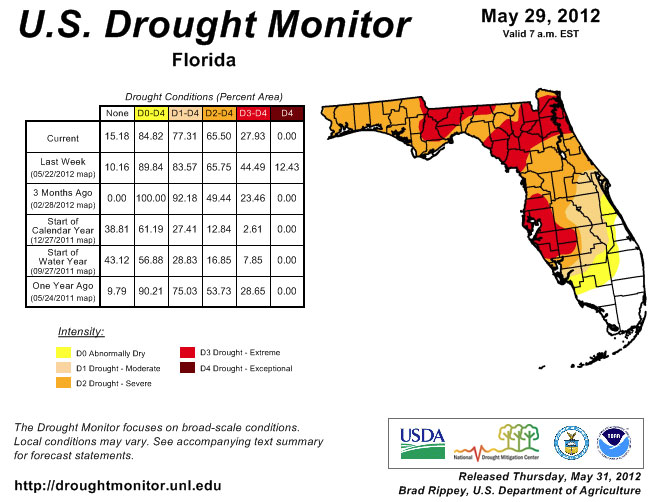 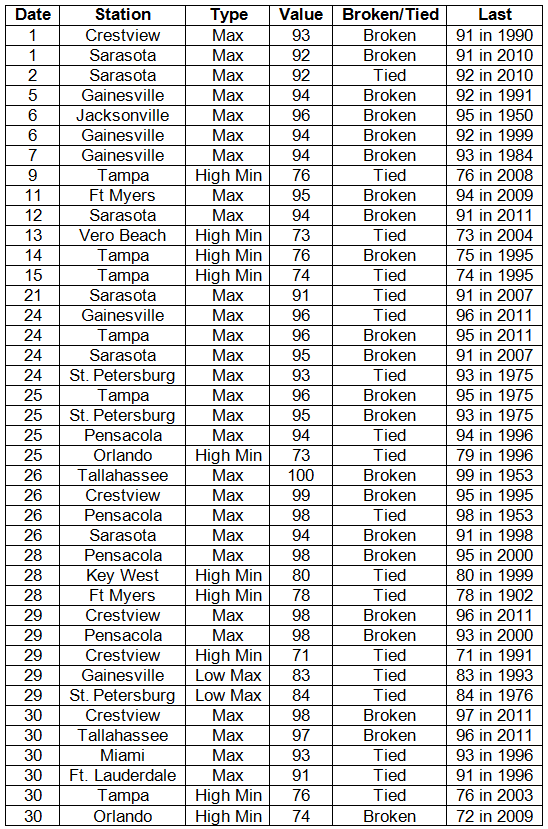