Climate Summary for Florida - May 2011

Average temperatures continue above normal in May. Average temperatures were slightly above normal except in the extreme northwest during May (Table 1). Numerous daily maximum and minimum temperature records were tied or broken (Appendix). A maximum at Orlando on the 11th (96° F) tied a record in existence since 1916. Daily maxima were set at Naples on four consecutive days (29th-31st) with 96° F on the 29th and 31st tying the record high for the month of May. In contrast, record daily minima were set on four consecutive days (16th-19th) at Apalachicola and on three consecutive days (16th-18th) at Pensacola. The minimum temperature of 49° F at Pensacola on the 18th broke a record in existence since 1945.

Rainfall totals below normal in most areas in May. Rainfall totals for May were below normal across most of the state in May (Table 2). Monthly totals at Tallahassee (0.59 in) and Miami (2.15 in) were more than four and three inches below normal, respectively. A daily rainfall of 1.68 inches at Sarasota on the 6th broke the previous daily record of 1.24 inches recorded in 1944. This was the only daily record set in May. Areas in the extreme northwest and the extreme southeast were the most below normal during May (Figure 1). Some areas in the southwest were above normal. 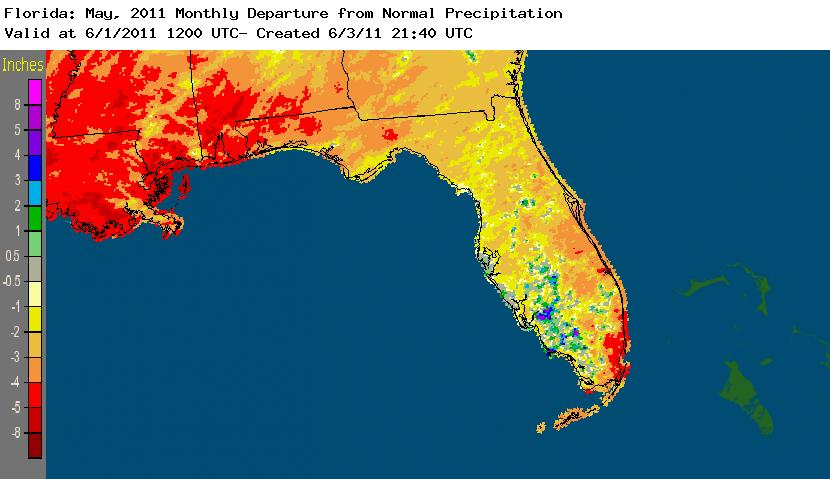 La Niña continues to weaken during May. Although sea surface temperatures in the equatorial Pacific Ocean continued to warm slightly during May, they continued below normal, denoting a weak cold phase of ENSO, or La Niña. May weather conditions continued as expected during a La Niña Spring.

Hazardous weather. Isolated events of large hail and trees and/or power lines downed by thunderstorm winds were observed on several days during May. However, the 14th was a very active day. Early in the morning trees and power lines were downed near Tallahassee, Lloyd, and Dills in the north. Later in the day trees were downed at numerous locations across north-central and central parts of the state. One person was injured when a tree was blown onto a mobile home near Oceanway in Duval County. Thunderstorm wind gusts included 76 mph at MacDill Air Force Base, 72 mph at Indian Rocks Beach, 70 mph at Pinellas Park, and 61 mph at Ft. Lauderdale. A roof was blown off a building in Temple Terrace. One-inch-diameter hail was observed at Middleburg, Sebring, and Fargo. Later in the month, hail up to the size of a golf ball (1.75 inch diameter) was observed near Jacksonville, Green Cove Springs, and Jacksonville International Airport on the 27th.

Agricultural and other impacts. Extreme drought conditions persisted in the southeast and northwest during May. Harvesting of vegetables in the south was nearly completed despite the dryness. Some young cotton and potatoes suffered damage from the dryness. Lack of soil moisture delayed planting of cotton in other areas of the north. Cool temperatures and dry conditions caused poor pasture conditions early in the month. By the end of the month most pasture was fair as moderate temperatures aided cool season forage growth. Above normal supplemental feed has been required to offset the overall dryness. Water restrictions remained in place for both agricultural and general use in the southeast. 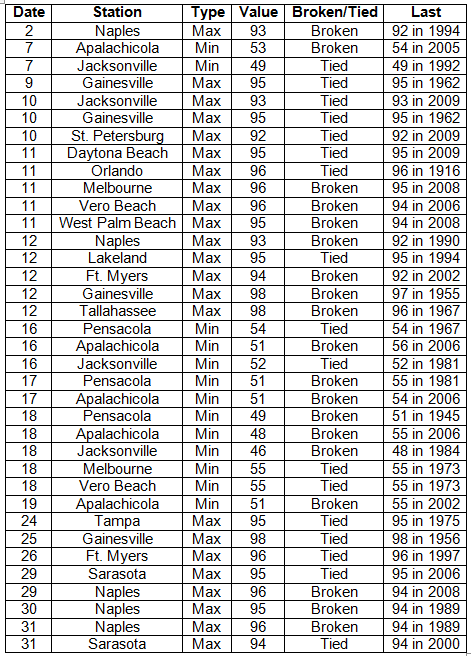