Average temperatures in March were mostly above normal for the state. The departures from average temperatures in March 2017 were above normal for most of the state, with some the exception of a few slightly below-normal values in the peninsular portion. Departures from normal at major reporting stations ranged from -0.2˚F in Fort Myers to +5.3˚F in Pensacola. Despite the overall warm temperatures, most of north Florida experienced a hard freeze after a mid-month strong cold front. The temperature fell to 21˚F at Cecil Field in Jacksonville on March 16th – the lowest temperature of the 2016-17 cold season statewide. Unofficially, this was the latest date in the spring when a temperature this low has ever been recorded in Florida.  Throughout the month, some high and low temperature records were tied or broken across the state (Appendix 2). March 2017 was the 10rd warmest in Pensacola. 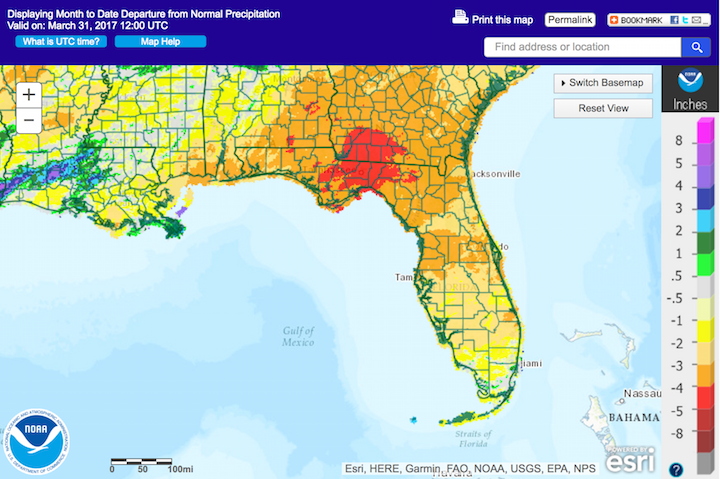 ENSO-neutral conditions are Present in the Pacific.

Based on current data, the Climate Prediction Center (CPC) ENSO Alert System Status is set to Not Active. ENSO-neutral conditions are currently present, with sea surface temperatures (SST) near average across the central and east-central Pacific Ocean, and above average in the eastern Pacific Ocean. ENSO-neutral conditions are favored through at least the spring of 2017, with increasing chances of El Nino development into the fall of 2017.  The CPC seasonal outlook favors above-normal temperatures and near-normal precipitation through June 2017.

March 2017 had a total of 95 local storm reports logged in the state (see Table 4 for breakdown by type). Over half of these reports came on a single day, the 23rd, when a cold front swept through the state, bringing high winds and hail to portions of Central and South Florida. Some reports of high winds and storm damage were also associated with the frontal passage on the 14th, and an EF1 tornado with estimated peak winds of 95 mph was confirmed in Broward County. There were waterspouts sighted on several days of the month, from coastal Palm Beach County to the Florida Keys, including at least 14 waterspouts spotted from Key West on a single day, the 28th. Due to the dry conditions, particularly in the peninsular portion of the state, there were a number of wildfires this month. Wildfires were reported in Alachua, Miami-Dade, Collier, Orange, Volusia, Nassau, Flagler, Brevard, and Marion Counties. Largest of these was a wildfire first reported on the 5th in Collier County, which grew to over 7,500 acres by the 8th of the month. This fire destroyed several buildings and vehicles, and heavy smoke from its burning made it necessary to close several roads and portions of I75. A 250-acre wildfire near Bryceville in Nassau County on the 22nd required evacuation of residents, and 10 homes were damaged or destroyed. Evacuations were also prompted by wildfires in a small community in Flagler County on the 24th, and near Fernandina Beach in Nassau County on the 31st.

Table 4: Breakdown of storm reports submitted in Florida during the month of March (Compiled from Southeast Regional Climate Center.)

At the end of February and in early March, approximately 35% of the state was drought-free, nearly 40% was abnormally dry (D0), and 25% was experiencing moderate drought (D1) conditions, with most of peninsular Florida experiencing either D0 or D1 conditions.   As the month progressed, the dry conditions extended to the north and west, and intensified. As of the latest drought monitor report, issued on March 28th, less than 9% of the state is drought-free, approximately 40% is abnormally dry (D0), another 40% is experiencing moderate drought (D1), and slightly over 11% is experiencing severe drought (D2). D1 or worse conditions are present over most of peninsular Florida, with D2 conditions currently affecting most of Desoto, Highlands, Okeechobee, Glades, Lee, and Hendry Counties, as well as parts of Sarasota, Collier, Levy and Alachua Counties. There are an estimated 11 million Florida residents in the drought-affected areas of the state. Due to the dry conditions, burn bans are currently in effect in Seminole, Osceola, Okeechobee, Glades, and Hendry Counties. At the end of the month, Lake Okeechobee water levels were at approximately 12.56 ft., which is below average for this time of the year. 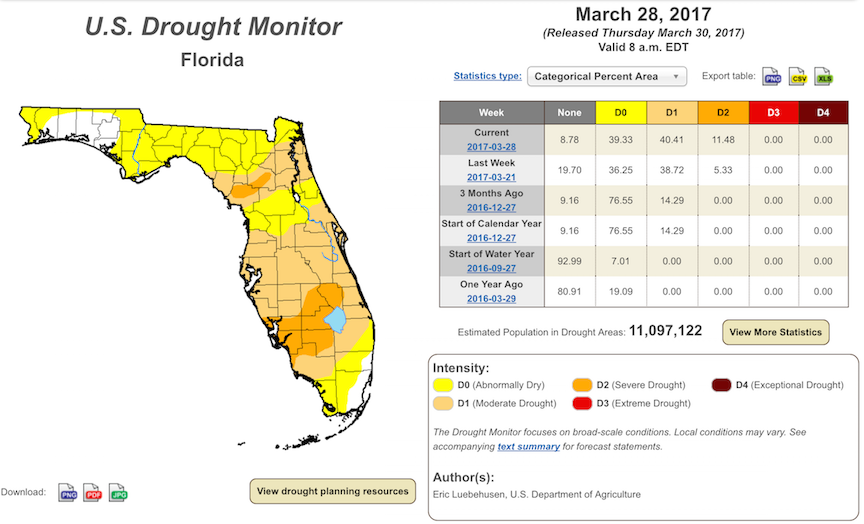 At the beginning of March, topsoil moisture levels were mostly short (46%) to adequate (40%), although 10% of very short and 4% of surplus values were also reported. Soil moisture conditions worsened as the month progressed, ending at 17% very short, 47% short, 32% adequate, and 4% surplus. Worsening drought conditions have affected the entire citrus growing area, with large portions of it in moderate to severe drought, requiring heavy irrigation, despite the occasional light rain. Citrus trees are in full bloom or in areas where bloom this year was early, already forming small fruit. Potato and corn planting has been underway, with some temporary slowdown due to the mid-month below-freezing temperatures across the north and central portion of the state. The hard freezes caused significant damage to many fruit and vegetable crops in the affected regions and set back planting activities. Much of the watermelon plantings in these areas were lost and are being replanted.  The sugarcane harvest has continued on schedule. Cattle are holding at fair to good condition, but pastures remain dry and continue to seasonally decline. Many farmers are using supplemental feeding to offset the mostly fair to poor pasture quality. Hay supplies are reported to be running low in Brevard County, and pastures in the county have also seen wildfires and lack of suitable water. 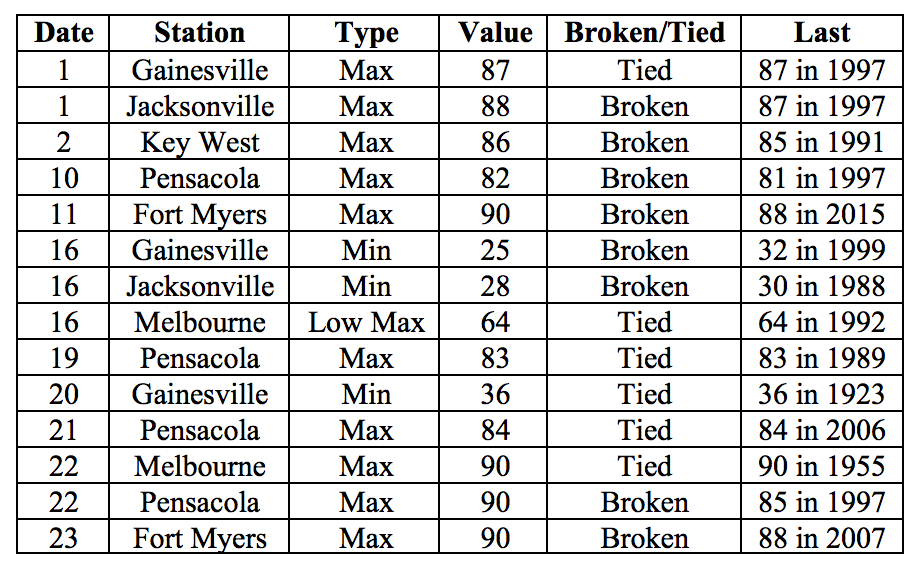