Rainfall totals in March were varied across the state. The Florida Panhandle, from the Alabama border to the Big Bend, had above-average rainfall, while the remainder of the state had mostly below-average rainfall  (Figure 1). Large portions of South Florida received less than half of the normal rainfall for the month, although pockets in Broward, Palm Beach, Osceola and Park Counties received more than double the normal amount. Major reporting stations registered departures from normal ranging from -2.39” in Miami to +1.84” in Pensacola (Table 2 and Appendix 1), although localized parts of the state saw rainfall totals that were as much as 3” below normal to 5” above normal (Figure 1). None of the major reporting stations had 24-hour precipitation records broken during this month. 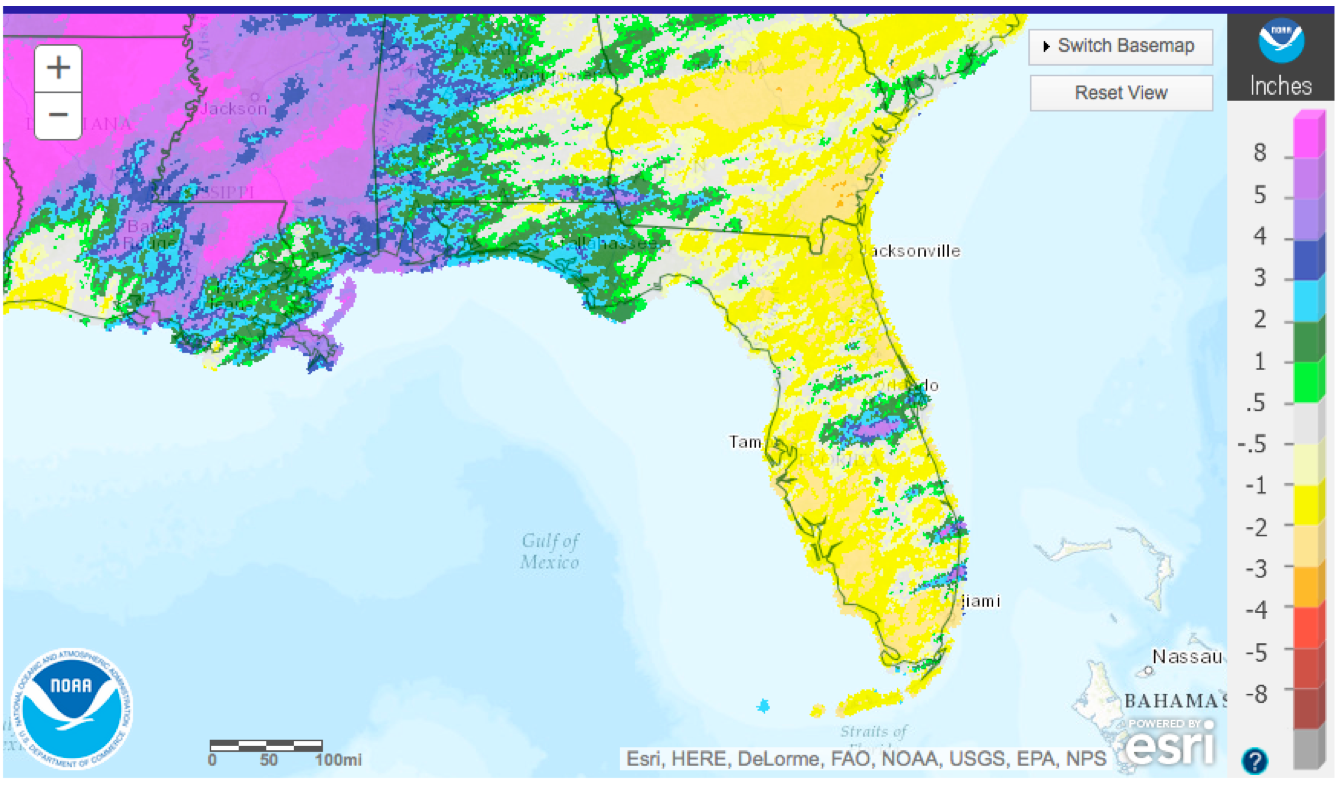 Based on current data and forecast models, the Climate Prediction Center (CPC) will keep the ENSO Alert System at an El Niño Advisory. A strong El Niño is present and weakening. Positive equatorial sea surface temperatures (SST) anomalies continue across most of the Pacific Ocean. A transition to ENSO-neutral is likely during late spring or early summer 2016, with close to 50% chance for La Niña conditions to develop by fall.

There were a total of 265 severe weather reports made in Florida during March.  The great majority of these, 242 reports, came from the second half of the month. Because of dry weather in the first half of the month, several small wildfires were reported around northeast Florida and were quickly contained. A frontal passage on the third of the month brought little rain but the strong winds caused a small amount of storm damage, mostly downed trees, along the Panhandle. A second front moved over the state between March 17th and 19th, bringing more strong winds and storm damage to the area, and reports of nickel- and quarter-sized hail in Walton and Bay Counties, and smaller-sized hail in Palm Beach and Collier Counties. A tornado was reported in Fort Lauderdale, overturning a few small boats on the beach and blowing down some signs, but causing no significant damage, before moving over the water. A series of fronts impacted the state between the 24th and 30th.  Up to one-inch hail was reported in Escambia, Okeechobee, Brevard, and Polk Counties on the 24th; Bay, Hillsborough, Broward, and St Lucie on the 25th; Hillsborough, Polk, Osceola, Lake, Escambia and Santa Rosa Counties on the 26th; Orange County on the 28th; Sarasota, Polk, Miami-Dade, Broward, and Palm Beach Counties on the 29th. Lightning caused power outages along portions of coastal Flagler County on the 25th. One person was left in critical condition after a lightning strike in Martin County on the 25th, and three people sustained minor injuries after a lightning strike in Boca Raton on the 27th. A lightning struck a residence in West Palm Beach on the 30th, starting a small fire and leaving a hole in the roof. Strong winds and storm damage were reported throughout the state. Parts of Broward and Palm Beach Counties received over 5’’ of rain on the 24th and again on the 30th. Between the 24th and 27th parts of the Panhandle – Bay, Gadsden, Liberty, Calhoun, Jackson, Washington and Walton Counties – received rainfall totals of up to 10’’. Some associated flooding and road closures were reported in the affected areas.

Table 4: Breakdown of storm reports submitted in Florida during the month of March (Compiled from Southeast Regional Climate Center.)

At the beginning of the month most (67%) topsoil moisture levels in the state were reported as adequate, although some (21%) surplus and some (12%) short values were reported as well. Low rainfall levels over much of the state dried out some of the surplus moisture, and by the end of the month, the coverage of adequate moisture levels increased to 73% and that of surplus values was reduced to 12%. The drier weather in most of the state was favorable for planting and harvesting activities, as well as for land preparation for planting. In parts of the Panhandle that saw excessive heavy rain, some re-working of fields prior to planting, and some replanting was necessary. Drier weather in south Florida made condition favorable for the increasing the pace of sugarcane harvesting. Fruits and vegetables in the area also benefitted from the warm sunny weather and the reduced disease pressure it brought, but all vegetable fields required irrigation. The great majority of the citrus growing region was drought-free throughout the month, with the exception of a few weeks in some of the northernmost counties, but nevertheless irrigation was wide spread. Most citrus trees are in full bloom and some are already developing fruit. Cattle are generally in good condition and pastures are improving seasonally due to the return to seasonally warming temperatures and mostly adequate soil moisture, although some pastures are exhibiting drought stress due to lack of sufficient rain.

According to the US Drought Monitor, near the end of February the entire state had been rated drought-free. By the first of March abnormal dry conditions had set in over 8% of the state’s area.  As the month progressed, abnormally dry conditions extended to about 20 percent of the state, including Alachua, Baker, Bradford, Clay, Columbia, Dixie, Duval, Flagler, Gilchrist, Hamilton, Lafayette, Levi, Madison, Marion, Nassau, Putnam, St Johns, Suwannee, Taylor, and Union counties. In all, roughly 2 million Florida citizens are currently affected by drought conditions. As of March 29th, the South Florida remains classified as drought-free despite the month’s significantly below-normal rainfall in the area thanks to the abundant excess rainfall received earlier in the year.  Water levels at lake Okeechobee are still unusually high – about 15.1’, or 0.81’ above normal for this time of the year. 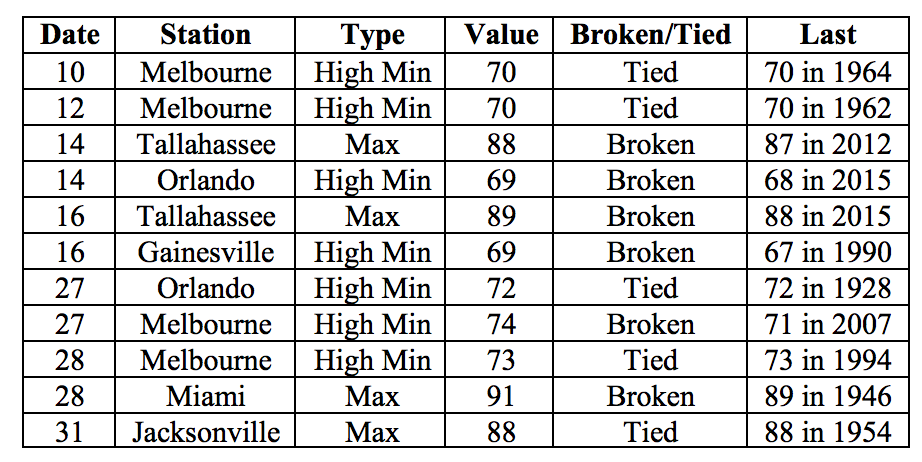