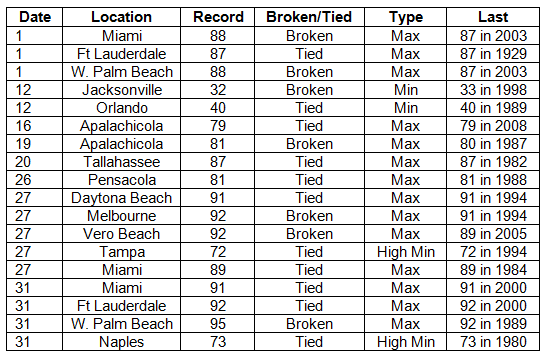 Rainfall totals below normal in the north and south, but above normal in central areas. Rainfall totals for March varied across the state. Below normal totals were observed in the north and south, while above normal totals were observed in central areas (Table 3). Tallahassee recorded a total more than three inches below normal. The monthly total at Tampa (9.79 in) was nearly seven inches above normal. At Tampa, 8.19 inches fell during the last four days of the month. Several daily records were set (Table 4). A total of 3.12 inches on the 31st at St. Petersburg broke a daily record in existence since 1931. Figure 1 graphically depicts the departure from normal of March rainfall totals across the state. 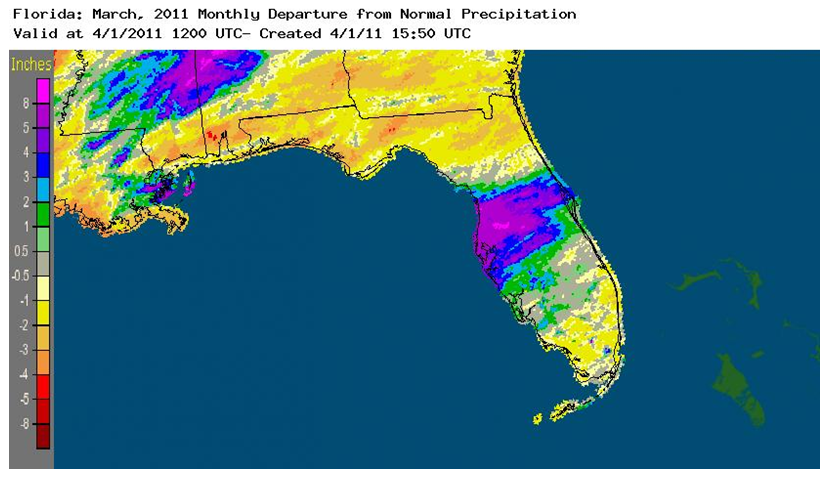 La Niña continues during March. Although sea surface temperatures in the equatorial Pacific Ocean warmed slightly during March, they continued below normal, denoting a weak cold phase of ENSO, or La Niña. As the impact of cold temperatures in the Arctic lessened, weather conditions returned to those expected during a La Niña Spring.

Hazardous weather. March was a very active month for severe weather in the state. Most of the events were concentrated on the last two days of the month. On the 10th, weak tornadoes touched down briefly near Ft. Lauderdale and Miami, causing minor damage. Additionally, wind gusts of 70 mph were observed near Ft. Lauderdale. On the 30th, thunderstorm winds caused widespread damage across north-central and central areas. A tornado was observed near Lake Panasoffkee and two-inch-diameter hail was observed at Malamar. Wind gusts up to 88mph on the Sunshine Skyway, 85 mph at the Kennedy Space Center, 74 mph near Azalea Park and 73 mph at Winter Haven were observed. One injury occurred when a tree was blown onto a house at Orange City. Strong winds caused moderate to severe damage to 11 homes at Winter Springs. The month ended with many severe storm events in west-central areas on the 31st. Tornadoes occurred at Indian Rocks Beach, Bartow, Mulberry, and near Lutz and Kathleen. There were numerous reports of downed trees and power lines and damage to structures. Near Lakeland, seven people were injured and 50 light aircraft were damaged or destroyed by 70-75 mph thunderstorm winds and a brief tornado at Lakeland Airport during an ongoing air show.

Agricultural and other impacts. Cold temperatures early in the month slowed growth of pasture. Later in the month warm windy conditions dried out soil and pasture. However, growth of natural grasses was aided by warming temperatures during the month. Although field preparation progressed, planting of some vegetables was delayed due to dry soil. By the end of the month severe to extreme drought conditions existed in southern areas and along the upper east coast. On March 26 a water shortage was declared in south Florida and water use restrictions were implemented.