March rainfall well above normal in central areas. Rainfall totals for March were well above normal across central Florida, below normal across much of northern Florida and generally near normal in southern Florida (Table 3). Pensacola (0.82") and Key West (-1.52") were locally above and below normal, respectively. Numerous daily rainfall records were set on March 11th and 12th (Table 4). The widespread area of above normal rainfall in central Florida and a narrow band of above normal rainfall along the northern Gulf coast are evident in Figure 1.

Figure 1. A graphical depiction of the monthly rainfall departure from normal (inches) for March is given in the figure below (courtesy of NOAA, NWS). 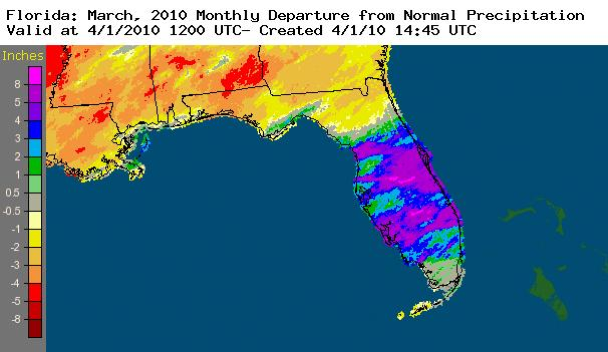 El Niño continues to impact Florida. Sea surface temperatures in the equatorial Pacific Ocean remained more than 1.0° C above normal, designating moderate El Niño conditions. Weather in Florida continued to follow expected El Niño-related conditions. A series of surface low pressure areas moved from west to east to the north of Florida during March, each followed by cold fronts that reinforced cold air across the state. This resulted in continued colder than average conditions across the whole state, and significantly wetter than average conditions in the central part of the state.

Hazardous weather. Thunderstorm wind damage occurred near New Port Richey on the 1st. Weak tornadoes, which touched down near Chassahowitzka, Auburndale and Haines City, and thunderstorm winds near Santos, Hernando and Zephyrhills caused minor damage on the 11th. Later in the month, weak tornadoes caused minor damage near Melbourne (28th) and Oakland Park (29th). Hail up to one inch in diameter was observed at Buckhead Ridge on the 28th.

Agricultural and other impacts. Wet weather early in the month hampered field work. Persistent cold weather slowed vegetable growth in most areas. Freezing temperatures caused some damage to sugarcane and nursery crops in the South. However, the sugarcane harvest was nearly complete by the end of the month. Heavy, soaking rains across central and some southern areas benefitted citrus crops. Although forage growth varied across the state due to locally heavy rainfall and cold temperatures, most cool season forage was near maturity by the end of the month.