Rainfall totals in June were well mixed across the state. Rainfall totals in June 2018 were mixed, with below normal values most prominent in parts of south and southwest Florida and above normal values in most of the central and eastern parts of the state (Figure 1). Departures from normal ranged from -3.73” in Tampa to +3.32” in Jacksonville (Table 2 and Appendix 1), although localized parts of the state saw rainfall totals that were as much as 5.00” below normal to 8.00” above normal (Figure 1). Two records for 24-hour precipitation were tied or broken for the month (Table 3).

Figure 1: A graphical depiction of the monthly rainfall departure from normal (inches) for June is given in the figure below (courtesy of NOAA, NWS) 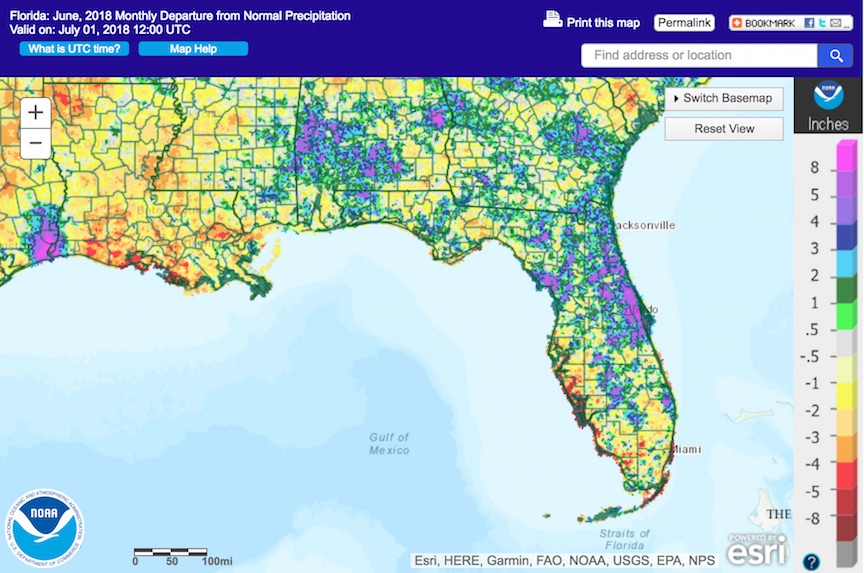 Based on current data and forecast models, the Climate Prediction Center (CPC) has set the ENSO Alert System Status to El Niño Watch. ENSO-neutral conditions are currently present, with sea surface temperatures (SST) near- to above-average across the east-central Pacific Ocean, and above average in the eastern Pacific Ocean. ENSO-neutral conditions are favored through the summer, with an increasing probability of El Niño developing into Fall and Winter 2018.  The CPC seasonal outlook favors above-normal temperatures for Florida through September 2018.

A total of 533 hazardous weather events were logged in the National Weather Service’s Local Storm Reports database for the state during the month of June (see Table 4 for a breakdown by type). The most frequent types of hazardous weather conditions encountered throughout the month involved high winds and storm damage.

Thunderstorms were frequent throughout the month and across the state. Wind gusts in excess of 50mph were recorded on multiple occasions in Alachua, Brevard, Broward, Duval, Escambia, Flagler, Monroe, Miami-Dade, Okaloosa, Palm Beach, Santa Rosa, and St. Johns Counties. A record daily wind gust of 53 mph was set for June 27th at Gainesville regional airport, breaking the old record of 41 mph for this date. Strong sustained winds ranging from 10 to 38mph were reported on the 28-29th of the month in multiple locations of Escambia, Flagler, and Santa Rosa Counties, and heavy rain on these dates impacted Escambia, Okaloosa and Santa Rosa Counties. Hailstorms were observed on multiple occasions during the month in Alachua, Bay, Brevard, Broward, Collier, Columbia, Flagler, Hendry, Indian River, Lake, Lee, Marion, Martin, Miami-Dade, Monroe, Orange, Osceola, Palm Beach, Seminole, St. Johns, and Volusia Counties. Hailstones with 2-inch diameter were recorded near St. Augustine Beach on the 3rd.

Multiple waterspouts were observed along the coastal waters near the Florida Keys and Miami area, with one waterspout crossing onto land as a weak tornado on the 13th in the area of Palm Beach. Several funnel clouds were reported on various dates in Alachua, Broward, Manatee, Marion, Miami-Dade, Palm Beach, Seminole, and St. Lucie Counties, and a possible brief tornado caused moderate roof damage on an apartment building in Tampa on the 29th.

Some of the most life-threatening weather events during June were lightning strikes.  At least 13 people were struck by lightning this month in incidents in Alachua, Bay, Brevard, Broward, Clay, Duval, Lake, Orange, Sarasota, and Volusia Counties, including two fatalities.  Another fatality and five injuries were reported as a result of rip currents at Pensacola Beach in Escambia County on the 19th of the month.

Table 4: Breakdown of storm reports submitted in Florida during the month of June (Compiled from Iowa State University/Iowa Environmental Mesonet.)

As of the latest US Drought Monitor Report issued on June 26th the entire state has remained free since the end of May, despite the below-normal rainfall in parts of South Florida,

At the end of the month, Lake Okeechobee water levels were at 14.26 ft., which is somewhat higher than normal for this time of the year. Following a very rainy May, large volumes of water were being released from the lake, causing problems with prolonged low salinity levels in the estuary. After a drier June, pulsed releases are being made to allow salinity levels to recover. There is a growing concern of spreading algal bloom in the lake.

At the beginning of June, topsoil moisture levels were at mainly adequate (74%) to surplus (24%). These levels have held relatively steady throughout the month, with just a slight shift towards lower values. Irrigation across the citrus growing region had been scaled back in the first half of the month, but has returned to daily due to warm temperatures and reduced rainfall. Overall it is estimated that the citrus crop is doing well. Cattle and pastures across the state are in generally good condition although some counties have had problems with prolonged oversaturation with pasture flooding causing difficulties for cattle. Overabundant rains in the Panhandle in May and into June delayed the cutting of hay and harvesting wheat and caused difficulty for planting of row crops. Some of the already planted crops were suffering with disease and weed pressure. It is likely that some crop fields will require replanting. Fruit and vegetable harvest has been proceeding well, although land preparation for fall planting was hindered by daily afternoon rains. Sugarcane is doing well.