Rainfall totals in June were varied. The departures from average rainfall were highly varied across the state (Figure 1). Tropical Storm Colin made landfall on June 6 in Taylor County and brought heavy rainfall over portions of Florida, resulting in flooding in some areas, especially Hillsborough and Pinellas counties. Major reporting stations registered departures from normal for the month ranging from -3.36” in Jacksonville to +8.42 in St Petersburg (Table 2 and Appendix 1), although localized parts of the state saw rainfall totals that were as much as 5” below normal to over 8” above normal (Figure 1). There were a small number of 24-hour precipitation records broken for the month (Table 3).

Figure 1: A graphical depiction of the monthly rainfall departure from normal (inches) for June (courtesy of NOAA, NWS).

Neutral ENSO Conditions are Present in the Pacific.

Based on current data and forecast models, the Climate Prediction Center (CPC)’s ENSO Alert System at Final El Niño Advisory/La Niña watch. El Niño has been replaced by ENSO-neutral conditions, with sea surface temperatures near average across the east-central and eastern equatorial Pacific Ocean. There is approximately a 75% chance that La Niña conditions for the fall and winter season of 2016/2017. In its seasonal outlook, CPC predicts a higher than average chance of above-normal precipitation and warmer-than-normal temperatures for Florida for July-September 2016.

A total of 440 hazardous weather reports were made in the month of June in Florida. The largest proportion of these reports were concerning high winds, followed by storm damage, heavy rain and thunderstorms (See Table 4 for a full breakdown). A large number of these events were associated with winds and rain from tropical storm Colin between June 5h and June 8th. Colin made landfall on June 6th along the Big Bend of Florida with maximum sustained winds of 50mph. Rainbands from Colin brought thunderstorms with strong gusts to the stretch between St Petersburg, Clearwater, and Tampa and Daytona Beach to Jacksonville, knocking down trees and power lines. Localized areas received rainfall in excess of 11 inches in a single day. Heavy rains and storm surge contributed to flooding along parts of the Gulf Coast, from Southwest Florida to Panama City. Dangerous rip currents developed along the Gulf Coast in the aftermath of the storm resulting in swimmers requiring rescue, and causing several casualties in the Panhandle.

Table 4: Breakdown of storm reports submitted in Florida during the month of June (Compiled from Southeast Regional Climate Center.)

At the start of the month, soil moisture levels were mostly adequate (58%) to short (30%), transitioning to overall wetter conditions (61% adequate, 17% short and 15% surplus) towards the end of the month, mostly because of rains from tropical storm Colin. Warmer than average temperatures have put slight heat stress on some fields. Planting of corn, cotton, peanut, and soybean crops was completed in the Panhandle counties. Pastures and livestock are overall generally in good condition, although some fields had temporary standing water for several days following heavy rains. Warm temperatures do not seem to have had a negative impact on cattle. The citrus region remained entirely drought free, and canals and ditches are at acceptable levels. Irrigation is run in most groves two to three times a week. Some grower shave observed postbloom fruit drop in their groves, as well as some citrus greening which is being taken care of by removal of affected trees and replanting. Overall, growers are positive about the outlook of their trees and the crop for next season.

According to the US Drought Monitor, Florida remained completely drought-free throughout the month of June. Water levels at lake Okeechobee are above average for the season, at 14.94 feet. 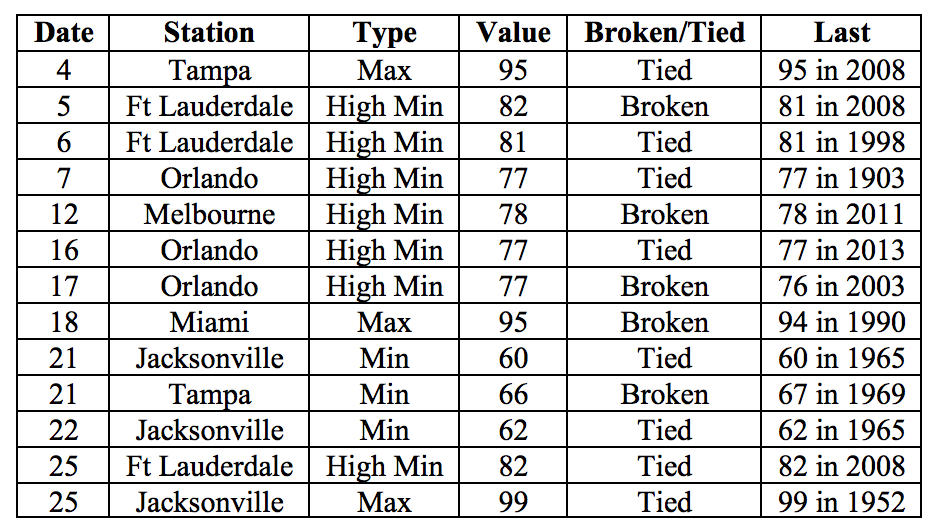