Rainfall totals varied across the state in June.With the exception of some interior portions of the Peninsula, especially around Polk County and counties east of Lake Okeechobee, the majority of the state had rainfall totals below normal (Figure 1). Departures from normal roughly ranged from -9.07” to -0.13” (Table 2 and Appendix 1), though localized parts of the state saw rainfall totals that were as much as 8.00” below normal to 8.00” above normal (Figure 1). There were multiple 24-hour precipitation records broken for the month (Table 3). 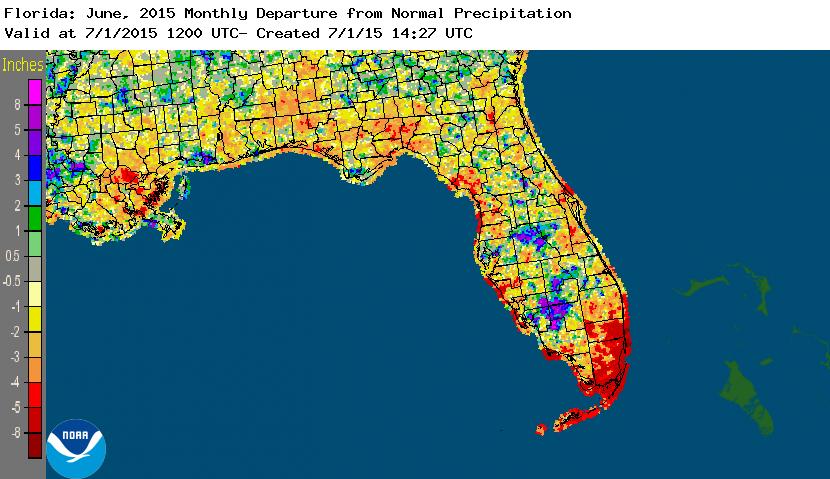 ENSO-neutral conditions continue in the Pacific. Based on current data and forecast models, the Climate Prediction Center (CPC) decided to continue the El Ni&ntildeo Advisory. El Ni&ntildeo conditions are present, and positive equatorial sea surface temperatures (SST) anomalies continue across most of the Pacific Ocean. There is approximately a 90% chance that El Ni&ntildeo conditions will continue through fall 2015, and a greater than 80% chance it will last through the remainder of 2015. CPC predicts above normal temperatures and below precipitation across the state through September 2015.

Hazardous weather events in June. There were a total of 490 severe weather reports made in Florida during June. On June 4th, a 10-acre wildfire was reported near the vicinity of Pomona Park in Putnam County. An 11-year old boy was injured after being struck by lightning while fishing in waist deep ocean waters off the coast of Daytona Beach Shores on the 9th. St. Johns County Emergency Management reported a tornado in Elkton, FL on June 10th. The tornado was rated EF-0 and destroyed a potato field, a shed and damaged a metal structure. On the same day, heavy rains (around 3.50”) caused multiple reports of flooding in downtown Tampa. A tornadic circulation caused damage in the Tequesta, FL (Palm Beach County) area also on the 10th. On the 19th, an 81-year old man was struck and killed by lightning as he was walking around in his front yard in Clearwater, FL (Pinellas County). Lightning caused a structure fire on the 21st in Duval County, near the campus of the University of North Florida. Two structural fires were caused by lightning on the 22nd, the first fire destroyed a mobile home in Lake City, FL (Columbia County) and the second in Naples, FL (Collier County) did $2 million in damages and a firefighter was injured when the second floor of the building collapsed. A tractor-trailer was struck by lightning on the 23rd, while traveling along Interstate 75 near Reddick, FL (Marion County). On the 24th, lightning started an early morning house fire in Gulf Breeze, FL (Escambia County) and a structural fire later that afternoon in Lowell, FL (Marion County). Lightning may be responsible for the death of a 25-year old man, who was working on the roof of a home in Port Orange, FL (Volusia County) on the 26th. A swimmer was indirectly struck by lightning on the 27th while standing in ankle deep water in Crescent Beach, FL (St. Johns County). Various convective and sea breeze thunderstorms caused hail, high winds, storm damage and heavy rains across the state during the entire month of June.

Agriculture Related Impacts.At the beginning of June, topsoil moisture levels were at mainly short to adequate across the state. Heavy rains at the start of the month slowed planting of peanuts, cotton and soybeans in the Panhandle. Wheat was harvested in Jackson County, while areas of the Big Bend and counties around Orlando started haying in the drier conditions. Peanut conditions were mainly fair to good, which was a decrease in conditions from last year’s crop. In southwest Florida, the growing season for fruits and vegetables was over. Due to the continued dry conditions and warm temperature, heavy use of irrigation was seen across Florida throughout the month, especially in the citrus areas. The lack of rains as the month progressed aided in planting of crops in the Panhandle, but deteriorated pasture conditions in North Florida. Warm temperatures during the middle of the month caused added stress on livestock. Sugarcane and rice were developing in south Florida counties, though localized fields needed excess water to be pumped due to heavy rain at the end of the month. Late season orange harvesting had come to an end and all of the packinghouses were closed, as growers began focusing on next season’s crop.

Drought Related Impacts.At the end of May, nearly 13% of the state was experiencing abnormally dry (D0) conditions, mainly concentrated in portions of northeastern and southern Florida. As June progressed, the lack of rain and warm temperatures did little to ease drought conditions. The area of D0 along with portions of the moderate drought (D1) in South Florida expanded and severe drought (D2) was introduced into Dade County. By the middle of June, the area of D0 expanded from the northeastern portions of the state (near Jacksonville) into the Big Bend, and with the continued below normal precipitation in that area, D1 was introduced. The June 23rd release of the Drought Monitor introduced D2 in part of the Lower St. Johns and Nassau/St. Mary’s river basins. In addition, the eastern coast of the state, from Nassau County to the Keys, has now been classified as experiencing at least D0 drought conditions. The area of D2 conditions in the southern part of the state expanded outside of Dade County and is now being observed in Broward County. Based on census data, roughly 6 million Florida citizens are currently being impacted by drought conditions reported in nearly 41% of the state. At the end of the month, the water level in Lake Okeechobee had dropped to just over 12 ft., mainly due to lack of rainfall across the basin. 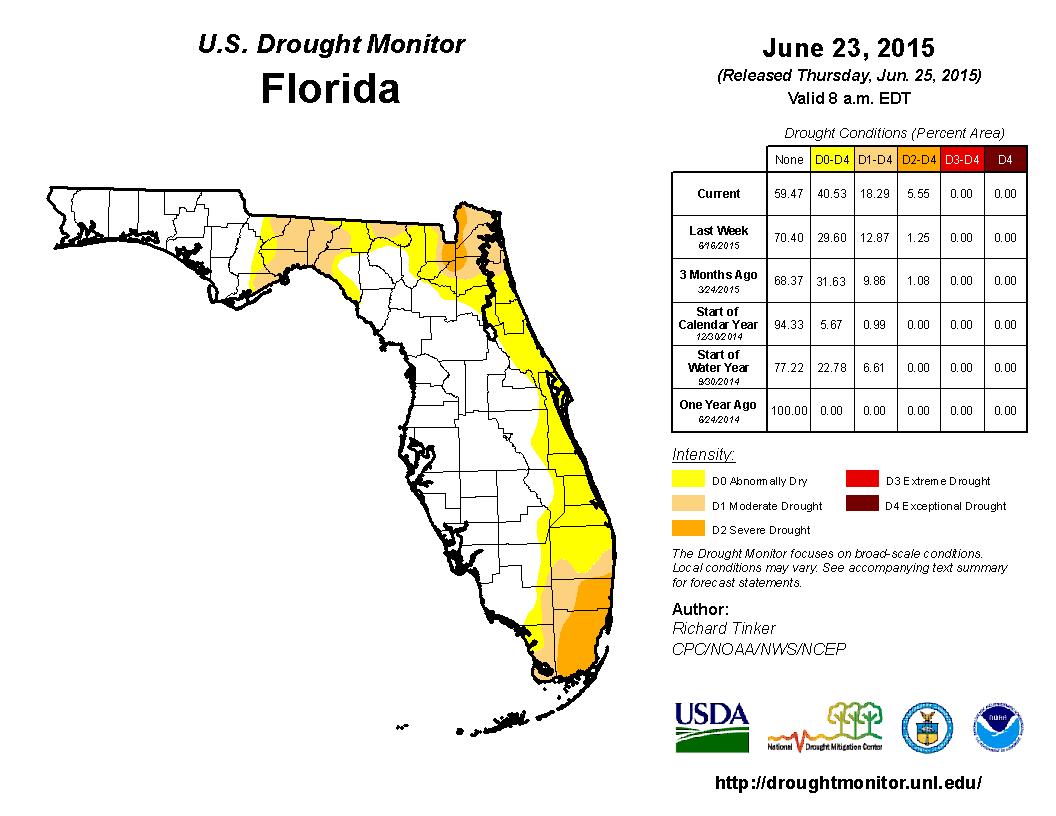 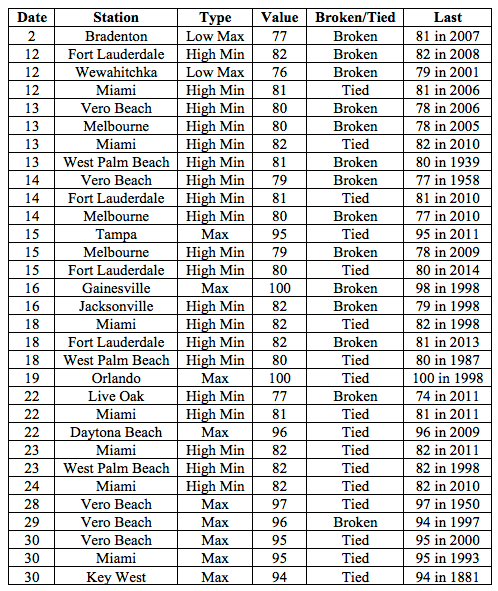