Rainfall totals varied across the state in June. Interior portions of the Florida Peninsula and the northwest Panhandle reported monthly rainfall totals well above normal, while the rest of the state saw below average rainfall during June (Figure 1). Departures from normal roughly ranged from -7.61” to 9.55” (Table 2 and Appendix 1), though localized parts of Florida saw rainfall totals that were as much as 8.00” below normal to over 10.00” above normal. June 2014 was the 7th wettest on record at Miami (the wettest was 1930 with 25.34”), and it was the 4th driest on record in Tampa (the driest was back in 1918 with only 1.26” of rain). There were multiple 24-hour precipitation records broken for the month (Table 3). 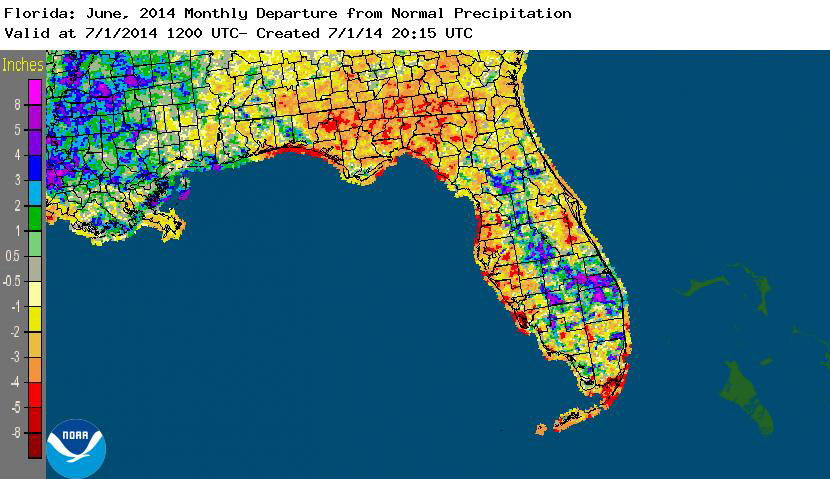 ENSO-neutral conditions continue in the Pacific. Based on current data and forecast models, the Climate Prediction Center (CPC) continues to have an El Niño Watch in place. Though Neutral ENSO conditions continue to be reported, the equatorial sea surface temperatures (SST) were above average across the equatorial Pacific. ENSO neutral conditions are currently being observed, with a 70% chance of transitioning to an El Niño by the end of summer and an 80% chance during the fall and winter. CPC predicts above normal temperatures across the entire state and normal precipitation through September 2014.

Hazardous weather events in June. There were a total of 459 severe weather reports made in Florida during June. On the 1st, a 27-year old male was pulled out to sea due to rip currents on Juno Beach. The Coast Guard suspended the search and the gentleman was presumed dead. The following day, heavy rains flooded parts of Aventura and Miami Gardens, FL. A severe thunderstorm set up along a boundary along north Florida late on the 6th and persisted through the early morning hours on the 7th, producing quarter sized hail, high winds (60 mph), and multiple reports of storm damage from Crestview to Fernandina Beach, including areas such as Marianna, Tallahassee, Lake City, and Maccleny. On the 8th, lightning caused damage to one of the runways at the Fort Lauderdale International Airport and structural fires in southern Tallahassee. Additional storms in other portions of the state, including north Florida and the interior peninsula, caused pea-sized hail and storm damage. Multiple reports of waterspouts were made along the coast of Fort Lauderdale on the 10th. High winds, up to 60 mph, were recorded up the east coast of Florida from the Keys to St. Augustine. A 70-year-old man was struck by lightning while picking blueberries by Allentown, and a person succumbed to strong rip currents off Clearwater Beach on the 13th. Another male lost his life due to rip currents off the coast of New Smyrna Beach on the 22nd. Various sea breeze thunderstorms caused hail, high wind, and storm damage across the state during the entire month of June.

Agricultural and other climate-related impacts. At the beginning of June, topsoil and subsoil moisture levels across the state were running more than 60% adequate and about 6% at surplus levels. Daily rain in the Panhandle had delayed the harvest of winter wheat and oats. Peanut planting was about 80% complete statewide, which was ahead of last year’s number. Some fields in central Florida were flooded, delaying planting of cucumbers and squash. Various fruits and vegetables were coming to market, while melons, okra, and others were being planted in Dade County. Moderate drought conditions in the southwestern part of the state impacted part of the southernmost citrus growing area. Cotton, peanuts, and corn continued to be planted in the northern part of the state, weather permitting, around mid-month. Some areas of north Florida had excessive rain. Watermelon harvests were taking place in Dixie, Bradford, and Gilchrist counties, while potatoes harvesting slowed down in Flagler and Putnam counties. Increased heat led to a loss of soil moisture levels. Cattle and pasture conditions across the state were good to excellent.

The National Drought Monitor showed that the lack of rainfall for the state at the end of May led to an increase in observed drought conditions, with moderate drought (D1) recorded for coastal portions of Collier, Dade, and Monroe counties. The Everglades, along with most of the Gold Coast, were experiencing abnormally dry (D0) conditions for the first two weeks of the month. Around the time of the June 17th release, rains in southern portions of the state had eased the moderate conditions and had cut back the D0 to all of Dade and Monroe counties and portions of Broward and Collier counties. Continued rains through the remainder of the month further alleviate drought conditions across the entire state. Lake Okeechobee is currently at 12.95 ft., which is up from the end of May. 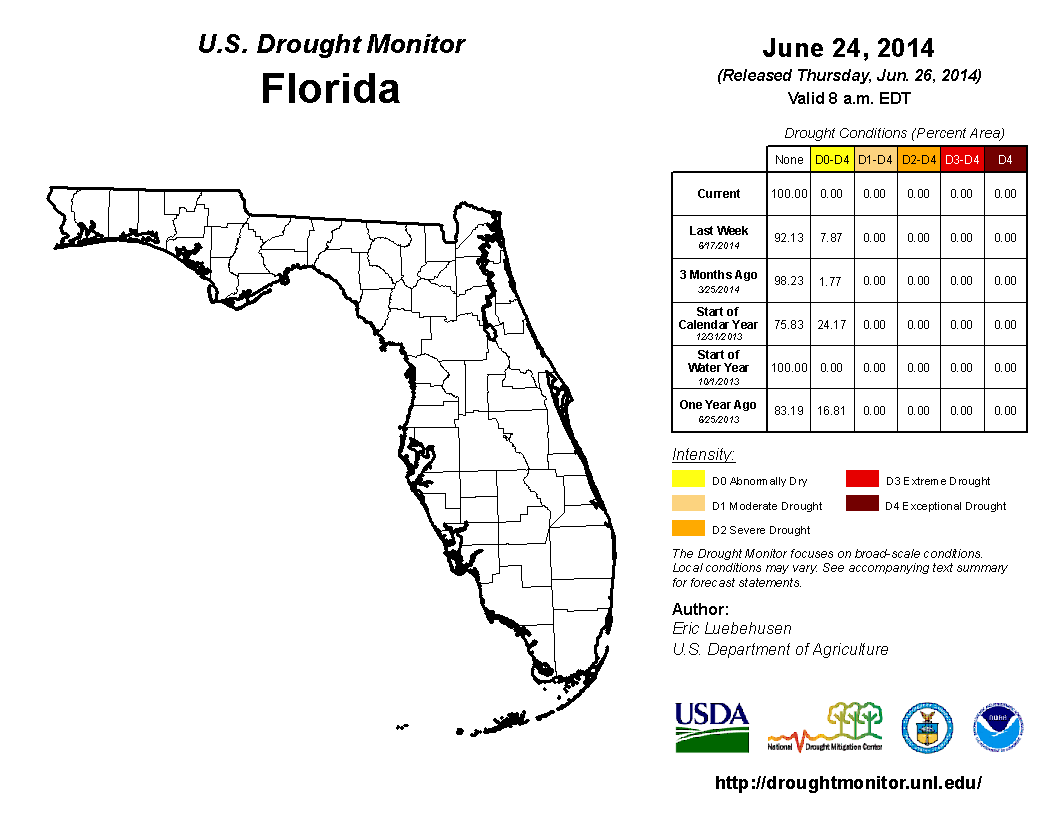 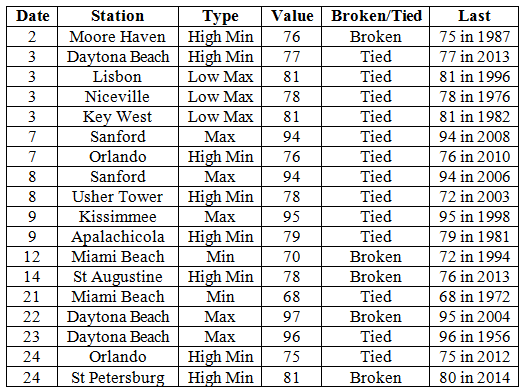