Rainfall totals varied across the state in June. Rainfall totals across the state varied in June (Table 2). Portions of the Big Bend, northeast and south Florida recorded below normal rainfall (between 1 to 4 inches), while the western Panhandle and the western peninsula reported up to 8 inches above normal precipitation (Figure 1). Tropical Storm Andrea made landfall near Steinhatchee on June 6th and brought widespread heavy rain to portions to the Nature Coast. Due to the fast movement of the system, most of the area was spared from flooding, though minor flooding was reported along Tampa’s Bayshore Boulevard. The rest of the precipitation during the month was characterized by typical summertime rainfall, with some of the stronger localized thunderstorms producing record-breaking rainfall (Table 3). 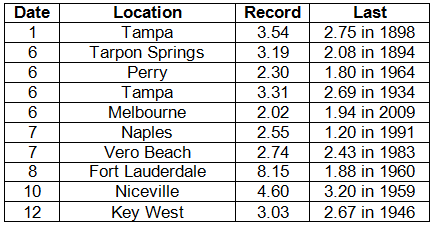 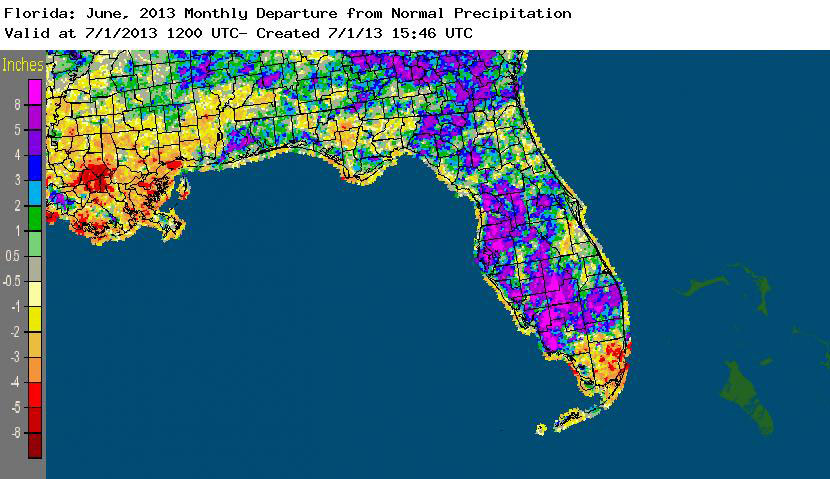 ENSO-neutral conditions continue in the Pacific. As of July 1st, neutral ENSO conditions continue to be reported for the equatorial Pacific. Equatorial sea surface temperatures (SST) are near average across the western and central Pacific Ocean and below average in the eastern Pacific. ENSO-neutral conditions are favored to continue through the summer 2013. The Climate Prediction Center (CPC) predicts above normal temperatures and above normal precipitation for the state through September.

Hazardous weather events in June. Over 250 storm reports were submitted in Florida during the month of June. The month started off with heavy rains and flooding reported in the areas of Boca Raton and Davie, FL, on the same day (June 1st) that a waterspout was seen offshore of Miami Beach. On the 3rd, 2.93 inches of rain fell in 90 minutes in Port Saint John, FL, and heavy rainfall was also reported in Winter Park. Tropical Storm Andrea made landfall near Steinhatchee, on the 6th, prompting numerous storm reports. A line of strong thunderstorms trained over the Keys with high winds (~45 mph) reported from both land and marine stations. Tornadoes were reported in Myakka River, Belle Glade, Sun City Center, Markham Park, Royal Palm Beach, St. Petersburg, Clearwater, Venice, Mayport, and Fernandina Beach. Heavy rainfall caused some localized flooding in places such as Gainesville, Jacksonville, Carrabelle, Tampa and Miami. As the storm moved up the East Coast, tropical moisture continued to be present over south Florida, causing additional reports of heavy rain and flooding along portions of the Gold Coast. A severe thunderstorm on the 10th produced hail, high winds and heavy rain in Gainesville. The 12th was a highly active day in and around Tampa, Fort Myers and Naples, as storms caused quarter-sized hail, 50 mph winds, heavy rains and a tornado. The greater Jacksonville area had numerous reports of hail, flooding, and storm damage on the 14th. On the same day, 3 waterspouts were seen at different locations along the Florida Keys. Two swimmers needed to be rescued from dangerous rip currents near Mayport, FL, on the 15th. A waterspout was reported by several spotters in Tampa Bay on the 19th while, across the peninsula, a funnel cloud was seen around Mims, FL. On the 24th, a thunderstorm caused hail, high winds in Tampa, and lightning that struck a utility shed and caused a small house fire in Clearwater, FL; hail was also reported in portions of the Panhandle and a small house was struck by lightning in Marianna. A 23-year old male died after being caught in dangerous rip currents on the 25th off the coast of Cape Canaveral, FL. A thunderstorm offshore of Panama City Beach produced 3 separate waterspouts on the morning of the 27th. Storm damage was reported around Tallahassee on the 28th from an intense early evening thunderstorm.

Table 4: Breakdown of storm reports submitted in Florida during the month of June (compiled from Southeast Regional Climate Center).

Agricultural and other climate-related impacts. Peanut planting continued in the Panhandle, and non-irrigated crops were showing stress due to lack of rain. Some hay was harvested but yields are low, and drought was a limiting factor for forage growth. Green beans were harvested in north Florida, watermelons were harvested in Central Florida, and vegetable harvesting was winding down in South Florida. Farmers in the Panhandle continued planting field corn, cotton, peanuts and soybean during the middle of the month, while tomatoes, potatoes, squash and cabbage were harvested. Cattle across the state were in good to fair condition. Toward the end of the month, dry weather delayed some planting in the Panhandle and the Kudzu bug affected soybeans in Okaloosa County. Forage growth was limited by not only drought but flooding in locations across the state. Soil moisture at the end of the month was adequate in most places in the state, as planting and harvesting operations continued for fruits, vegetables, rice, and wheat.

At the end of May, the lack of rainfall from the previous month in the northern part of the state prompted the re-introduction of dry conditions in Escambia, Santa Rosa, Okaloosa, Walton, Washington, Holmes and Jackson counties and an area of severe drought around the Nature Coast. The summertime rainfall pattern kicked off the beginning of June, and many stations around the state reported near or above normal rainfall for the month. The drought conditions were slowly removed during the month in the peninsula, as the area impacted by drought received 150% of monthly normal rainfall. Parts of the Panhandle continued to have issues with drought during June, though areas of moderate drought eased, the area of dry conditions expanded into the Big Bend region. 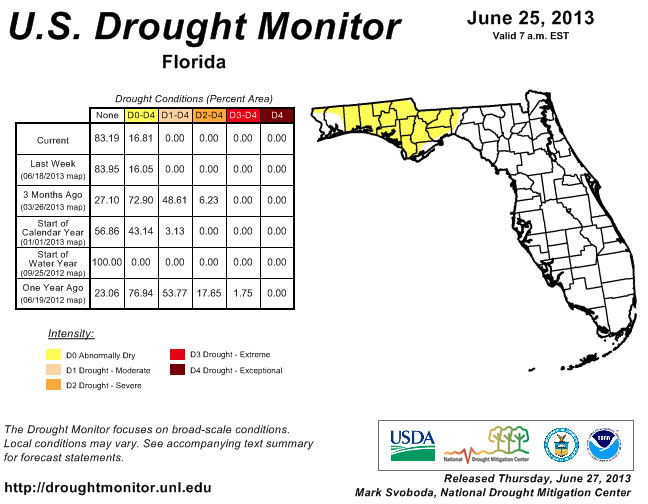 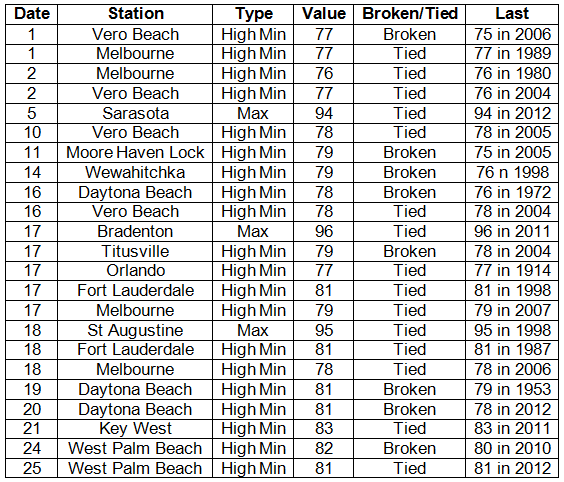