Average temperatures well above normal for June. Persistent high pressure at both the surface and aloft during June resulted in widespread record-warm temperatures. Monthly average temperatures for June were well above normal across the entire state (Table 1). The monthly average temperature at Miami (85.5° F) was a record for any calendar month. The monthly average temperature at Key West (85.9° F) broke a record in existence since 1886. Average monthly temperature records were also set at Jacksonville, Fort Lauderdale, Naples, Lakeland, and St. Petersburg. This was the second warmest June on record at Tallahassee and West Palm Beach. More than 25 daily maximum records were tied or broken during the month. In particular, a maximum of 92° F at Key West on the 7th tied a record in existence since 1956. Maxima of 100° F on the 12th and 101° F on the 13th tied daily records at Tallahassee. On the 15th, a maximum of 102° F tied the daily record at Jacksonville. Also on the 15th, the maximum of 99° F at Gainesville tied a daily record last observed in 1909. The extent of the warmth was notably evident in many record high minimum temperatures across central and southern parts of the state throughout the month.

Figure 1. A graphical depiction of the monthly rainfall departure from normal (inches) for June is given in the figure below (courtesy of NOAA, NWS). 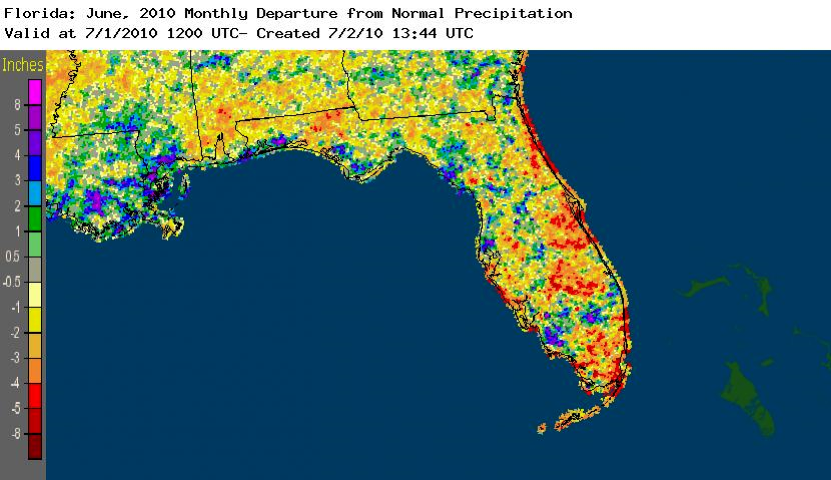 ENSO reaches neutral phase. Sea surface temperatures in the equatorial Pacific Ocean continued to cool during June and now indicate a neutral phase of ENSO. Continued above normal temperatures and below normal rainfall observed in most areas during June are consistent with conditions expected in Florida as an El Niño episode ends.

Hazardous weather. On the 20th a weak tornado caused damage to the roof of a house at Cape Coral. Throughout the month thunderstorm winds downed trees and power lines power lines in isolated areas. On the 18th, trees fell on two houses near Lake City. One person was injured on the 20th when a tree was blown onto a mobile home near Goldenrod. Thunderstorm wind gusts reached 64 mph at Apalachicola and 74 mph at Miami Beach on the 4th. Later in the month, thunderstorms produced wind gusts up to 60 mph at Jacksonville Naval Air Station on the 16th, 64 mph at Wright on the 18th, and 70 mph at McDill Air Force Base on the 21st. There were only isolated reports of large hail. The largest observed hailstones were 1.25 inches in diameter at Azalea Beach on the 2nd and at Kendall on the 3rd.

Agricultural and other impacts. Early in the month heavy rains in northern areas slowed peanut planting. However, these heavy rains lessened the need for irrigation later. By mid-June there were nearly ideal growing conditions for corn, cotton, tobacco and peanuts. Also, the return of hot temperatures and higher humidity produced good growing conditions for citrus in central and southern areas. Sugarcane, corn and rice in southwestern parts of the state benefitted from frequent summer showers. As rainfall lessened toward the end of the month, parts of the Panhandle and northern peninsula reached minimal drought conditions. There was some crop damage from sunscald reported in north-central areas.