Rainfall totals were varied across the state in July. Portions of the western coast of Florida had well above normal rainfall, while the Panhandle and southern Florida recorded below normal (Figure 1). Departures from normal roughly ranged from -2.95” to 6.98” (Table 2 and Appendix 1), though localized parts of the state saw rainfall totals that were as much as 8.00” below normal to 8.00” above normal (Figure 1). July 2015 was the 7th driest on records in Key West and the 8th wettest for St. Petersburg. There were multiple 24-hour precipitation records broken for the month (Table 3). 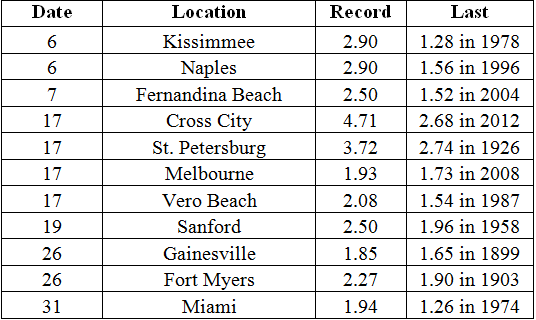 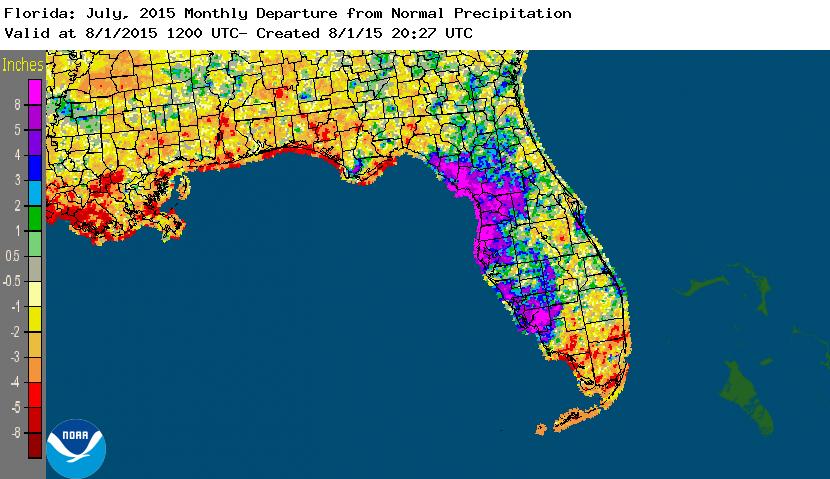 El Niño conditions are present in the Pacific.
Based on current data and forecast models, the Climate Prediction Center (CPC) decided to continue the El Niño Advisory. El Niño conditions are present, and positive equatorial sea surface temperatures (SST) anomalies continue across most of the Pacific Ocean. There is approximately a 90% chance that El Niño conditions will continue through the Northern Hemisphere winter 2015-2016, and a greater than 80% chance it will last through early spring 2016. CPC predicts above normal temperatures and normal precipitation across the state through October 2015.

Hazardous Weather Events in July.
There were a total of 470 severe weather reports made in Florida during July. Multiple reports of funnel clouds were made along the area in Flagler Beach and lightning struck a seven-story building in Marineland, FL. On the 3rd of July, a house fire was started by a lightning strike in Clearwater, FL. Many news media outlets showed pictures of a large waterspout off the coast of Miramar Beach, FL on the 5th. A brush fire near Durbin, FL (St. Johns County) started from lightning on the 6th, but was quickly extinguished by firefighters. On the 12th, a well-defined waterspout was reported about 3 miles southwest of Marathon, FL. Lightning caused house fires in Palm Coast, FL and Bunnell, FL on the 13th. Lightning associated with an intense thunderstorm on the 16th injured one person in Baldwin, FL and another in Normandy, FL. Heavy rains on the 17th caused flooding in downtown St. Petersburg, FL. Lightning was the cause of house fires in Navarre, FL on the 19th and Jacksonville Beach on the 21st. Two people were indirectly injured from a lightning strike near a restaurant in Jacksonville Beach, FL on the 21st. The following day, three people were injured at Haulover Beach, FL from a lightning strike. A stalled stationary front caused heavy rains and flooding in areas of Hillsborough, Pasco and Pinellas counties on the 25th and 26th. Two women were injured in Orlando on the 29th when lightning struck near where they had been standing. Various convective and sea breeze thunderstorms caused hail, high winds, storm damage and heavy rains across the state during the entire month of July.

Table 4: Breakdown of storm reports submitted in Florida during the month of July. (Compiled from Southeast Regional Climate Center.)

Agriculture Related Impacts.
At the beginning of July, topsoil moisture levels were at mainly short to adequate across the state. The late June rains improved pasture quality in the Panhandle and southwest Florida. Corn harvesting and silage was in full swing across multiple counties in the state. Late planting of soybeans took place in the Panhandle by mid-month. Wet conditions delayed haying in some northeast Florida counties. Due to the lack of rain in southeast Florida, all crops in Dade counties were being irrigated. The dry and hot conditions across much of the southern part of the state impacted pasture conditions and livestock. Growers in the Peninsula began preparing land for fall crops. Portions of the western Big Bed dealt with heavy rainfall and pastures in the area showed signs of mildew from the wet conditions. Drought conditions took a toll on soil moisture values with 22% of the topsoil reported being short of moisture. Heavy rains flooded fields across portions of the western Peninsula, and army worms were reported in Pasco County. The peanut progress was on par with the 5-year average with 81% of the pegging condition between good and excellent. At month’s end, several counties in the center of the citrus growing region were showing some abnormally dry conditions and irrigation was being used in most locations.

Drought Related Impacts.
At the end of June, nearly 41% of the state was experiencing abnormally dry (D0) or drought conditions. The main concentration was seen along the east coast of the state, and in portions of northeastern and southern Florida. By July 7th, area of D0 was added into Escambia, Santa Rosa and Walton counties. As the month progressed, limited rainfall lead to continued drought conditions in North Florida and the Big Bend, where moderate (D1) and severe (D2) droughts were reported. In South Florida, the area of D2 conditions was expanded in Broward, Dade and Palm Beach counties. Severe drought (D3) conditions were introduced along the Gold Coast. Rains toward the end of the month helped ease D2 in the northeastern part of the state and along Volusia and Brevard counties. Based on census data, roughly 6 million Florida citizens are currently being impacted by drought conditions reported in nearly 40% of the state. At the end of the month, the water level in Lake Okeechobee had dropped to under 12 ft., mainly due to lack of rainfall across the basin. This pushes the lake into water shortage management stages. 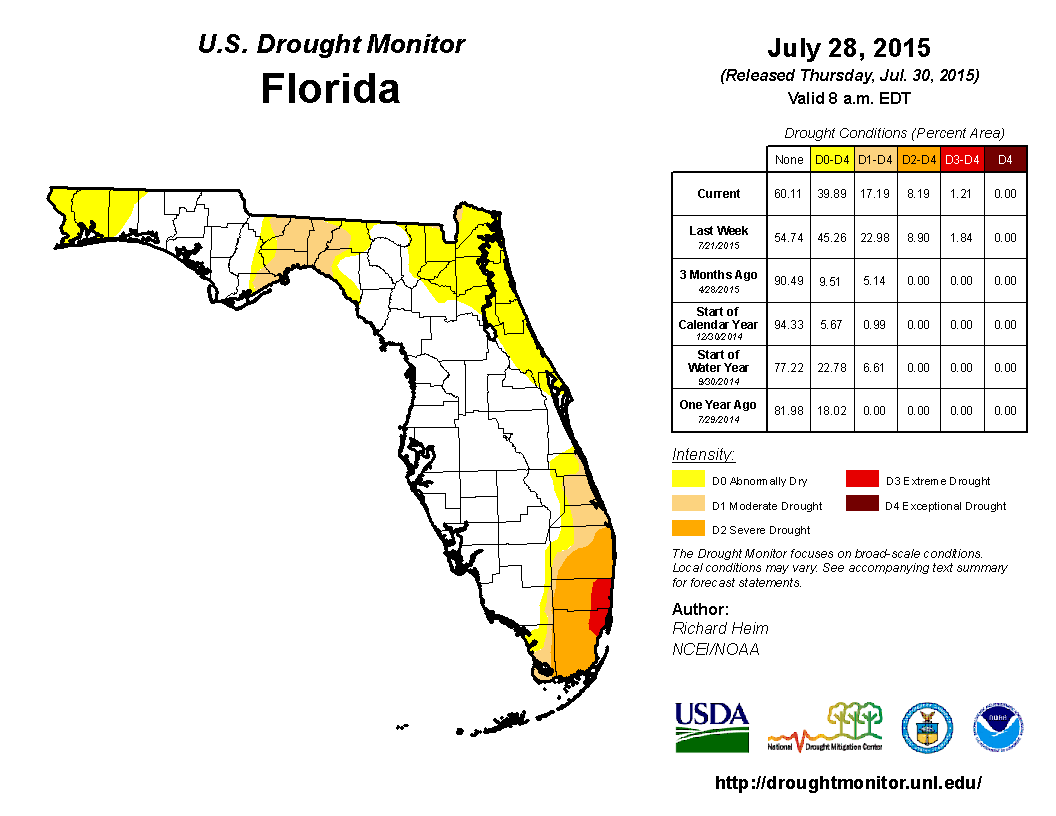 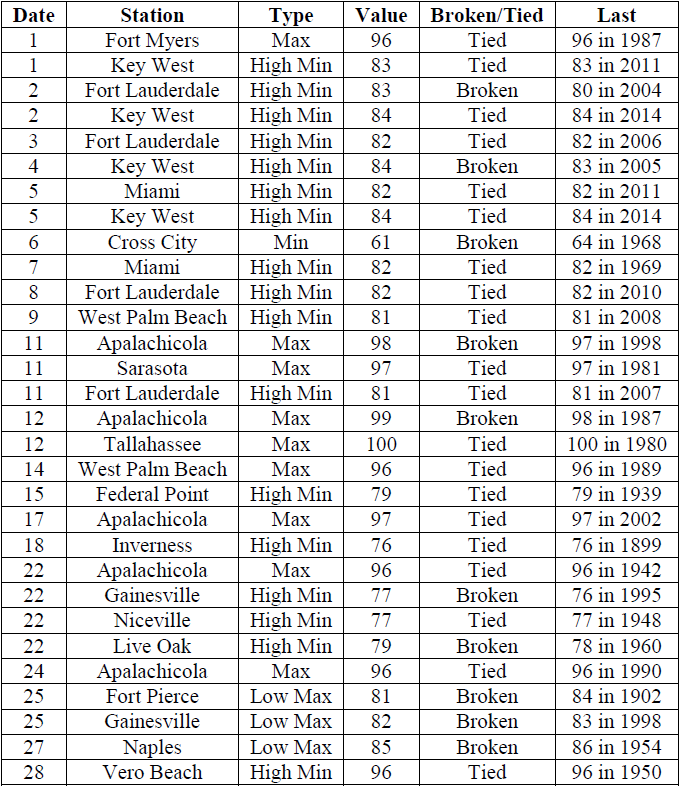