Average temperatures varied across the state in July. Average temperatures were below normal to slightly above normal for June across the entire state (Table 1 and Appendix 1). Departures from normal ranged from -2.1˚F at Key West to 1.1˚F in Jacksonville. July 2012 was the 13th coldest on record in Key West, while the month proved to have the 4th warmest average minimum temperature (76.1˚F, 1.5˚F above normal) at Pensacola. Only 4 record highs were broken in July, though the month saw numerous records tied or broken (Appendix 2), with the majority of those being from low maximum or high minimum temperatures.

Rainfall totals varied across the state in July. Rainfall totals in the state varied in July (Table 2). Portions of the Nature Coast saw above normal precipitation, while areas along the First and Space Coasts had below normal rainfall totals. Summertime sea-breeze convection was hit and miss across the state, with some small pockets of above normal rainfall directly next to areas of below normal rainfall. July 2012 was the 6th wettest on record in Fort Lauderdale (Appendix 1) and Key West, while it was the 3rd driest July on record in Gainesville (Appendix 1) and 5th driest in Orlando. Areal patterns of monthly rainfall relative to normal are depicted in Figure 1. 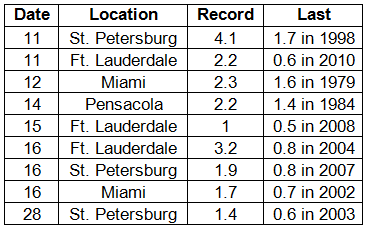 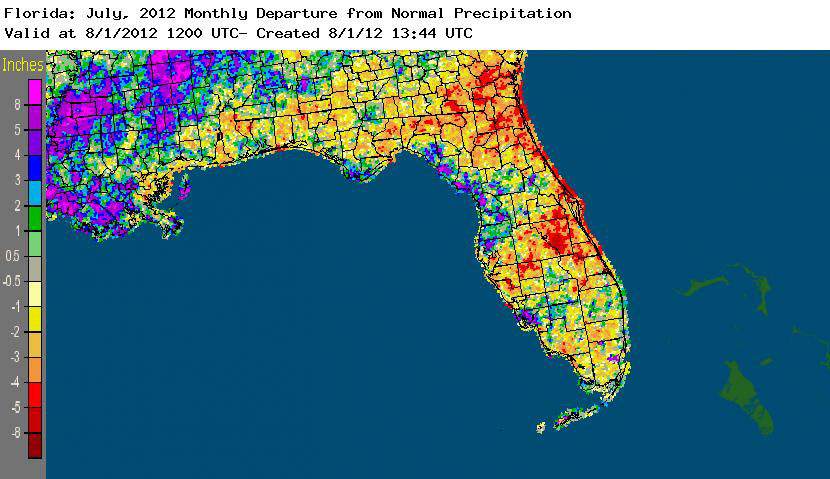 ENSO-neutral conditions continue in the Pacific. Neutral ENSO conditions continue to be reported for the equatorial Pacific. Equatorial sea surface temperatures (SST) are greater than 0.5˚C above average across the eastern Pacific Ocean. The chances have increased for El Niño to begin in July-September of 2012 and continue through the winter of 2012-2013. The Climate Prediction Center (CPC) continues to predict warmer than normal temperatures for the state and is predicting above normal precipitation in the western Panhandle through October.

Hazardous weather events in July. July was not as active for severe weather when compared with June. In total, there were 299 storm reports made last month.

Table 4: Breakdown of storm reports submitted in Florida during the month of July. (Compiled from Southeast Regional Climate Center.)

Agricultural and other climate-related impacts. At the beginning of July, fields and agricultural interests across parts of the state were trying to recover from the heavy rainfall from Tropical Storm Debby. Major flooding was reported in fields in Baker and Marion Counties, and in Suwannee County about 30% of the peanut fields were underwater. Muddy fields prevented harvesting of corn for silage. Despite all the rain from Debby, which drastically improved drought conditions in the major citrus areas, certain parts of the state experienced little rain or problems, including Gadsden County, which reported good cotton conditions. Assessments of the fields by mid-month shows that irrigated and non-irrigated crops were in good conditions. Avocadoes were marketed and okra was being harvested in Dade County. Pasture conditions were good due to the temperatures, but there had been some heat-strained cattle reported in the Panhandle. Flood-waters from Debby started to subside through the middle of the month, though some low-lying fields still had standing water. Heavy summer rains had flooded some fields in Lee County. Insect and fungal pressures were higher than normal due to the rain. Cotton and peanut fields needed rain in the western Panhandle. By the end of the month, soil moisture levels were all within adequate ranges. Growers were preparing the fields for the fall vegetable planting season, and citrus grove activity mainly focused on fertilizer application, summer oil spraying, young tree care and regular maintenance to prepare for the upcoming citrus season. 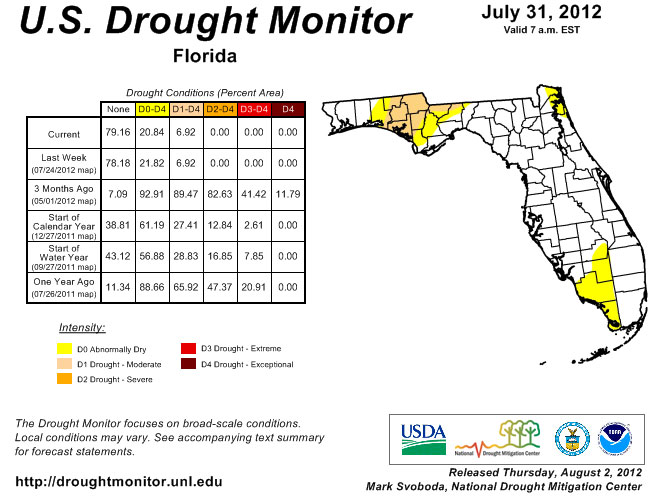 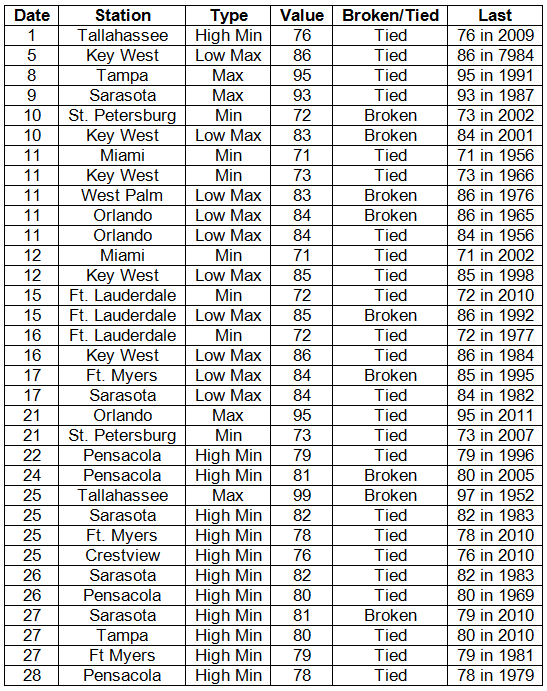