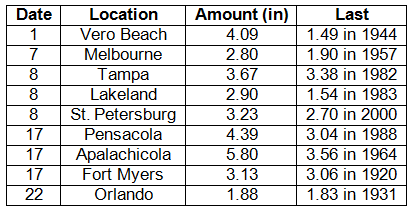 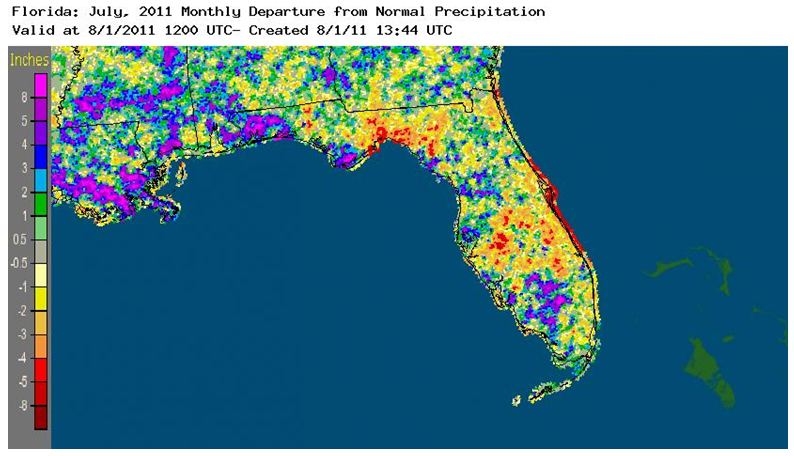 ENSO neutral phase continues during July. Sea surface temperatures in the equatorial Pacific Ocean were close to long-term average values during July, indicating a neutral phase of ENSO. However, atmospheric patterns continued to be as observed during La Niña. These ENSO conditions have little impact on weather across the state during summer.

Hazardous weather. A weak tornado caused roof and siding damage to four homes near Zephyrhills on the 7th. A severe thunderstorm produced wind gusts to 59 mph southwest of the Rotenberger Wildlife Management Area on the 1st. On the 15th trees were downed near Greenville, Madison, Hamilton, Jasper, and Lake City. Thunderstorm winds gusted to 60 mph at Estero, 59 mph at Charlotte County Airport, and 58 mph at Fort Myers on the 22nd. As a strong line of thunderstorms moved northeastward across the northeast corner of the state on the 25th, wind gusts downed trees and/or power lines near Starke, Palatka, Durbin, Palm Coast, Orange Park, and downtown Jacksonville.

Agricultural and other impacts. Substantial rain that fell during the middle of the month improved soil moisture for crops and pastures. Rain helped the growth of cotton and peanuts in the north, but plant sizes were still smaller by a few weeks of growth due to earlier dryness. Rapid growth of sugarcane was noted after rains in the south. However, the threat of pests and disease increased with higher moisture and high temperatures. Extreme drought conditions persisted in the northwest, north, and southeast parts of the state. Near-normal rains in recent weeks only produced short-term relief from the drought, and water restrictions are still in place in the southeast.