There were 30 daily maximum records tied or broken at primary reporting stations during the month. Six of these records were temperatures of 100° F or higher. The maximum temperature at Lakeland on the 28th was the highest temperature recorded there during July. The extent of the warmth was evident again in July as more than 50 record high daily minimum temperatures occurred across central and southern parts of the state throughout the month. Temperatures of 83° F at West Palm Beach (21st and 24th) and Naples (30th) were record high minima for the month of July.

July rainfall below normal in most areas. Monthly rainfall in July was below normal in most areas around the state, except in the extreme southeast and the Keys. Pensacola (3.70 in) was more than four inches below normal (Table 2). However, localized heavy rain produced record daily amounts (Table 3). In particular, daily totals of 2.51" at Fort Lauderdale on the 4th and 4.03" at Apalachicola on the 5th broke records in existence since 1922 and 1940, respectively. The overall distribution of July rainfall departures from normal is depicted in Figure 1. Note that some areas in the Panhandle and east-central Florida experienced well below normal amounts of rainfall. 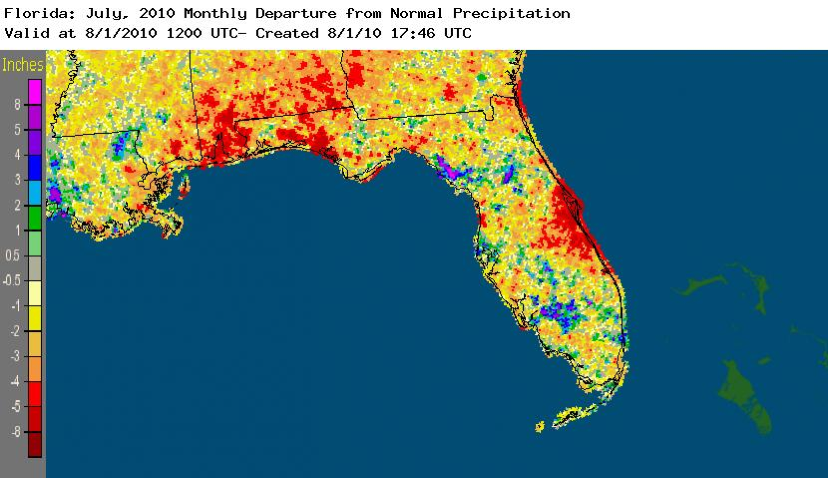 La Niña begins during July. Sea surface temperatures in the equatorial Pacific Ocean continued to cool during July and now denote a cold phase of ENSO, or La Niña. The development of La Niña has little impact on climate in Florida during summer.

Hazardous weather. Thunderstorm winds downed trees and/or power lines in several northern and central locations on the 15th. Also on the 15th, a building was damaged near Melbourne, and, as a line of thunderstorms moved off the southeast coast, wind gusts of 66 mph and 70 mph were recorded at Key Biscayne and Fowey Rocks. Minimal Tropical Storm Bonnie made landfall just south of Miami on the 23rd with maximum sustained winds around 40 mph. A gust of 52 mph was recorded along the coast at Fowey Rocks. Also on the 23rd, a weak tornado blew trees onto a house in Pensacola and thunderstorm winds caused roof damage at Crestview. On the 28th, 1" hail and 67 mph wind gusts were observed near Tampa.

Agricultural and other impacts. Beneficial rain for crops occurred early in the month in the Panhandle and southern portions of the state. On the other hand, these rains encouraged rapid weed growth in northwestern areas. Persistent hot temperatures produced heat stress on field crops and pastures without irrigation. By late in the month, some areas along the eastern coast reached mild drought conditions.