Rainfall totals in January were varied across the state. Most of north Florida recorded above normal rainfall, and most of peninsular Florida had below-normal rainfall, with localized exceptions (Figure 1). At the major reporting stations, departures from normal roughly ranged from -1.92” to 7.27” (Table 2 and Appendix 1), though localized parts of the state saw rainfall totals that were as much as 3.00” below normal to 8.00” above normal (Figure 1).  January 2017 was the 6th wettest in Pensacola, and 10th wettest in Tallahassee and Lake City. There were no 24-hour precipitation records broken for the month at any of the major reporting stations. 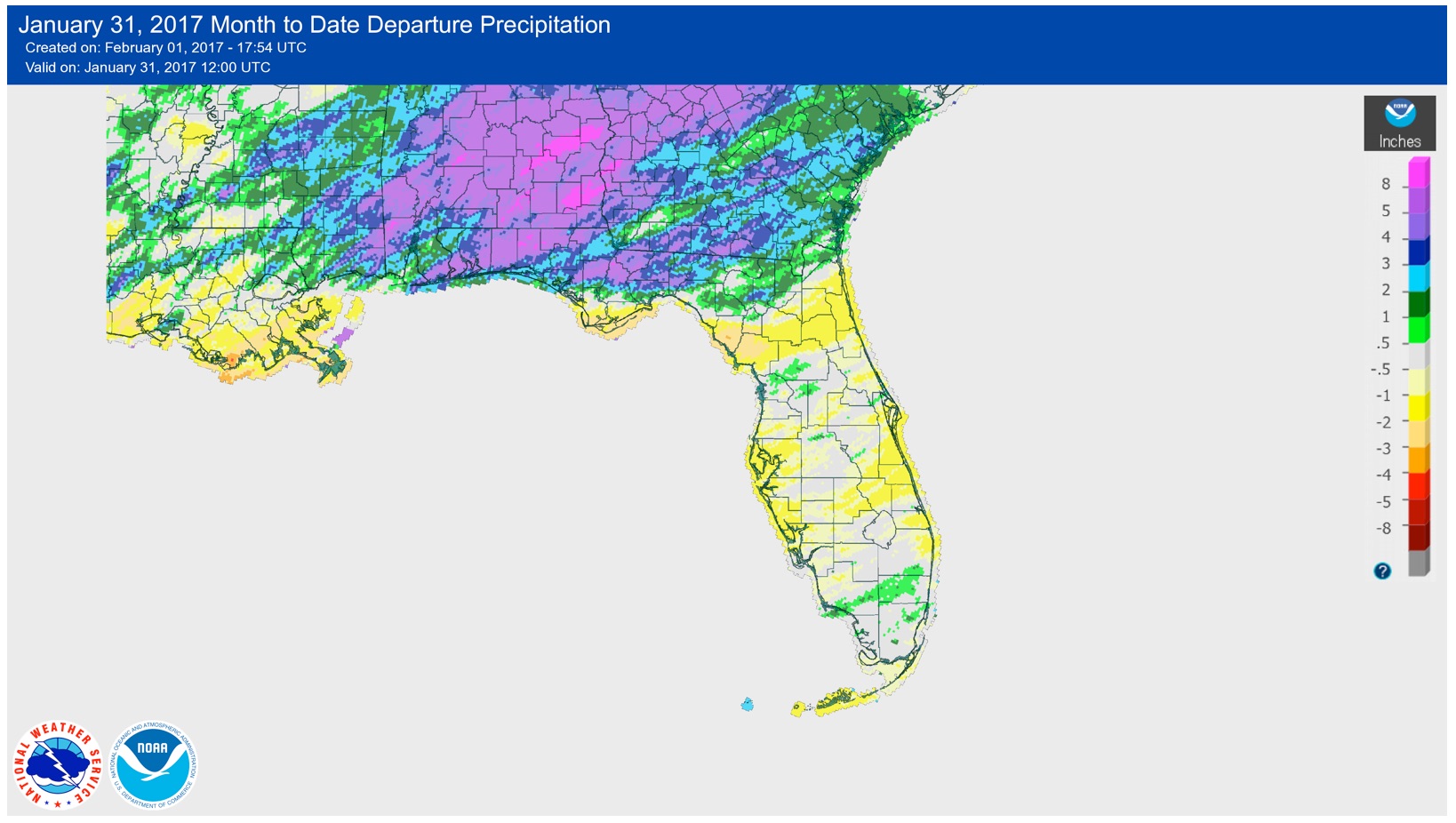 Based on current data and forecast models, the Climate Prediction Center (CPC) will keep the ENSO Alert System at a La Niña Advisory. La Niña conditions are present, as near- to below-normal equatorial sea surface temperatures (SSTs) continue across the central and east-central Pacific Ocean. SSTs are above normal in the in the far eastern Pacific Ocean. A transition to ENSO-neutral conditions is expected during February 2017, and ENSO-neutral conditions are expected to continue through the first half of the year.  The CPC seasonal outlook favors above-normal temperatures and below-normal precipitation for the state for February through April 2017.

On January 2nd, severe weather was observed over the western Panhandle, as moisture inflow from the Gulf of Mexico combined with a strong upper-level disturbance and a strengthening low-pressure system. Numerous storms produced heavy rain, lightning, and high winds. Several lightning strikes were reported on houses across Santa Rosa County, causing house fires in at least four homes. A person in a tent was taken to the hospital for a lightning strike but was not injured. Flooded roadways and bridges were reported in numerous areas in Escambia and Walton counties, and a drowning fatality was reported in Walton County. Several measurements of marine winds over 40MPH were recorded over the coastal waters, and automated observing stations in Jackson County recorded thunderstorm winds of 60MPH. Thunderstorm winds caused damage to power lines and several structures in Escambia, Walton, Holmes, and Jackson Counties, and wind-downed trees were responsible for vehicle damage in Escambia County. Also on the 2nd, but not as part of this severe weather complex, one person drowned and two people required rescue from dangerous rip currents in Pompano Beach (Broward County).

On January 6th-7th, another strong cold front passed over the state. January 6th brought dense morning fog in Collier, Broward and Miami-Dade Counties created dangerous driving conditions, with visibility along some highways below a quarter of a mile. Later that evening as the front pushed through, there were reports of hail, and downed trees and power lines in Columbia County. A brief weak (EF0) tornado produced damage to roofs and trees in a quarter mile swath in Suwannee County in the early hours of the 7th. Over the next twelve hours, as the storm quickly swept to the south, high winds exceeding 40MPH were reported from Citrus, Manatee, Brevard, Broward, Palm Beach, Miami-Dade Counties, and along the Florida Keys. Thunderstorm wind damage, including damage to trees, power lines, cars and homes was reported in Suwannee, Citrus, Marion, and Miami-Dade Counties. These storms also produced dangerous lightning, resulting in one injury in Volusia County in the early morning hours of the 7th.

On January 21st-23rd, a vigorous cold storm combined with enhanced low-level southerly flow bringing in warm Gulf air created a potent environment for severe weather from the western Panhandle to south-central Florida. A Particularly Dangerous Situation tornado watch was issued for a large swath of the state. The storm system did produce an unusually high number of tornadoes across the Southeast US, ending up as one of the largest winter tornado outbreaks on record. Fortunately for Florida, however, most of the tornadic activity spared the state, with only a few weak tornadoes (EF0 and EF1) observed or confirmed by damage surveys in Franklin, Miami-Dade, and Palm Beach Counties. Funnel clouds were observed in Brevard, Escambia, and Lake County but dissipated before touching ground. Waterspouts were spotted offshore from Destin and Fort Walton Beach. Storm surge of two to three feet, combined with high tide, caused coastal flooding along the Gulf Coast from Levy to Manatee County on the 22nd. Reports of up to one-inch diameter hail were widespread in Bay, Brevard, Duval, Flagler, Lake, Okaloosa, Santa Rosa, Suwannee, Union, Volusia, and Walton Counties. Reports from Escambia County indicated up to two-inch hail. High sustained winds and strong wind gusts were reported throughout the state, from the western Panhandle to South Florida, resulting in widespread storm damage and numerous power outages affecting tens of thousands of households.

Table 4: Breakdown of storm reports submitted in Florida during the month of January (Compiled from Southeast Regional Climate Center.)

The previous month’s trend of improving drought conditions continued into January. According to the US Drought Monitor Report, at the end of December, about 9% of the state was completely drought free, 77% is experiencing abnormally dry conditions, and 14% (including most of Bay, Gulf, Calhoun, Gadsden, Liberty, Franklin, Taylor, Suwannee, and Hamilton Counties, as well as portions of Escambia, Jackson, Wakulla, Jefferson, Madison, Columbia, and Baker Counties) were experiencing moderate drought. By January 3rd, following heavy rains there, drought conditions were lifted from Escambia, Santa Rosa, Okaloosa, Walton and Washington Counties, and downgraded in other Panhandle counties. The easing of drought conditions in the Panhandle continued as the month progressed. As of the latest US Drought Monitor report (January 24th), approximately 38% of the state, including the entire Panhandle, is drought free. The remaining 62%, constituting most of Peninsular Florida, are affected by abnormally dry (D0) conditions.

Water levels in Lake Okeechobee at the end of the month were at 13.85 feet, which is somewhat below the average for this time of the year. 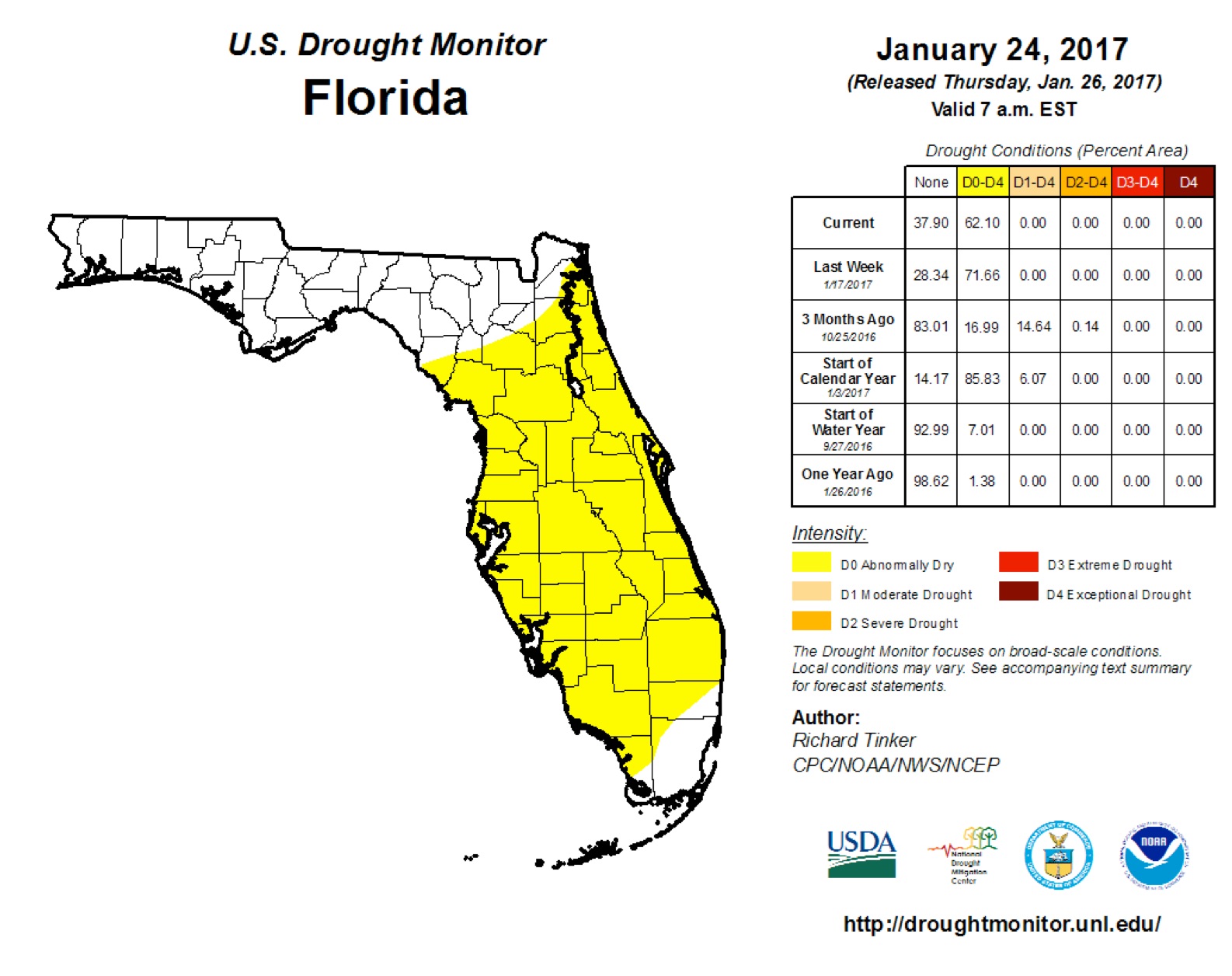 The month began with soil moisture levels predominantly in the adequate (45%) to short (34%) range, with some (14%) very short  and some (7%) surplus values also present. By the end of the month there was a slight improvement, with 51% adequate, 35% short, 6% very short and 8% surplus values.

Abnormally dry conditions have been present in the citrus growing area throughout the month, despite some rain mid-month, and temperatures have been above normal for the season. The water level in canals and ditches is low because of the persistent lack of widespread rain in the region for the past several months. Growers are irrigating frequently to maintain sufficient moisture in the ground and on the trees. Blooming has begun statewide. Tangerines are harvested for the fresh market, mid-season oranges are steadily improving in internal quality, and grapefruit harvest is strong and of good quality.

Cattle condition across the state is holding at fair to good, while pasture quality is seasonally declining. Some frost damage midmonth has contributed to poor pasture conditions in Dixie and Pasco Counties, and standing water was a problem in some pastures in Holmes and Washington Counties. Supplemental feeding of cattle has been used to compensate for poor pasture quality in Brevard, Charlotte, Collier, Glades, Indian River, Okeechobee, Lee, Pasco, and St. Lucie Counties.

The strong rains early in the month brought relief from dry conditions in most of the Panhandle, but also caused some erosion problems in Okaloosa County. Farmers in Dixie, Flagler, Putnam, and Suwannee Counties have begun planting cover crops and spring potatoes. Sugarcane harvest in south Florida continues strong and on schedule.

Foggy mornings have been conducive to diseases in vegetables for southwest Florida. Strong winds on the 22nd and 23rd also damaged some vegetable crops in that region. The warm winter weather has some blueberry growers concerned about the lack of sufficient accumulated chill hours and premature blooming. 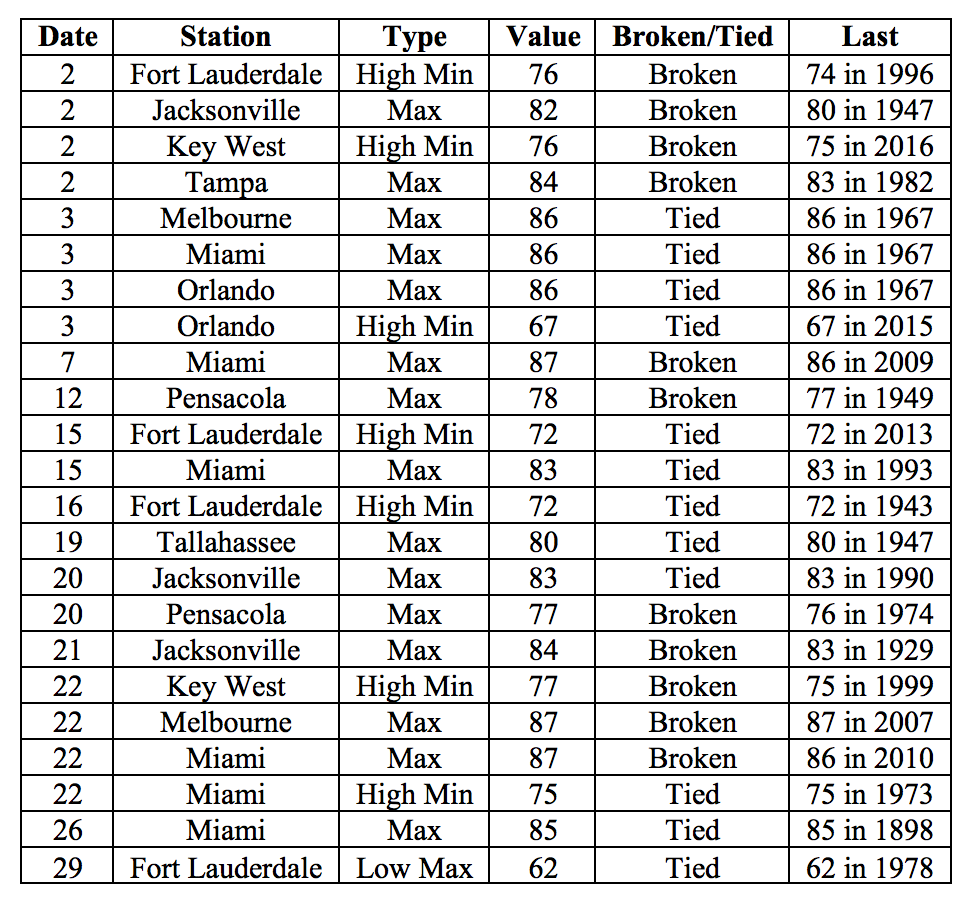