Rainfall totals in January were above normal for most of the state. . Most of the state – particularly the Florida Peninsula – had well above normal rainfall, and parts of North Florida had slightly below normal rainfall (Figure 1). Major reporting stations registered departures from normal ranging from -0.69” to +11.04” at Fort Myers (Table 2 and Appendix 1), and localized parts of western Panhandle saw rainfall totals that were as much as 4” below normal (Figure 1). January 2016 was the wettest January on record in Ft Myers, Miami, Melbourne and Vero Beach. There were a number of 24-hour precipitation records broken for the month (Table 3). 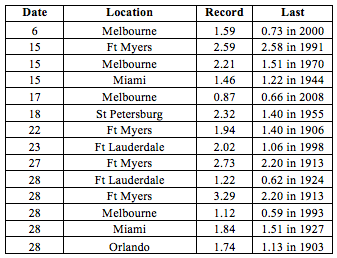 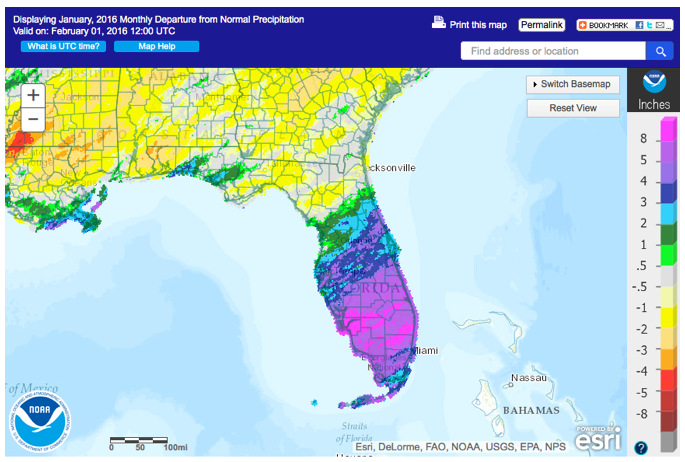 Based on current data and forecast models, the Climate Prediction Center (CPC) will keep the ENSO Alert System at an El Niño Advisory. El Niño conditions remain present, and positive equatorial sea surface temperatures (SST) anomalies continue across most of the Pacific Ocean. This strong El Niño is expected to gradually weaken through spring 2016 and transition to neutral during late spring or early summer 2016. CPC predicts slightly below normal temperatures and above normal precipitation across the state for February to April 2016.

There were a total of 307 severe weather reports made in Florida during January. Over half of these came from just two days, January 15th and 17th. Moist warm air from the Gulf of Mexico and a cold front sweeping through the state created strong instability over the region, resulting in widespread thunderstorms with heavy precipitation, high winds, and even several tornadoes. Widespread storm damage from this system including downed trees and power lines was reported from the Panhandle to South Florida. An EF2 tornado in Manatee County on the 17th was responsible for two fatalities and several injuries; several other tornadoes were confirmed in South Central Florida damaging multiple homes. A tornado striking a beach community in Sarasota left nearly 17000 residents without power. Earlier in the month, on January 9th, another powerful tornado – with peak winds of 132 mph – near Cape Coral caused minor injuries, damaged nearly 180 homes and brought down power lines. Several more tornadoes, funnel clouds and waterspouts were spotted during this month. The high number of such events is consistent with the strong El Niño present in the Pacific. The next major cluster of hazardous weather events was observed on January 22-23. Snow flurries were reported from Gainesville to Jacksonville. High winds and were seen from Pensacola to the Florida Key, with storm damage to buildings, trees and power lines reported mostly in the Panhandle and along the Atlantic Coast.

Table 4: Breakdown of storm reports submitted in Florida during the month of January (Compiled from Southeast Regional Climate Center.)

At the beginning of January, most (88%) of the state reported adequate topsoil levels; some surplus (8%) and short (11%) values were reported as well. Due to the heavy rains, by the end of the month the surplus values increased in coverage to 27%, and the extent of adequate topsoil levels went down to 68%. Wet fields delayed completion of harvesting of some cotton, peanut and soybean fields. Pasture conditions in the southeast were mostly poor due to standing water from heavy rains. Cool season forage (clover and ryegrass) was a failure in Flagler and Dixie counties. By the end of the month, 19% of Florida’s pastures are classified as poor or very poor, however the majority are in a good (42%) or fair (35%) condition. The condition of cattle across the state is mostly (64%) good or fair (23%). The heavy rains have exacerbated some vegetable disease conditions and disrupted planning and harvesting activities for fruit and vegetables. High winds have also been a problem for crops, causing lodging and damage. Low volumes coming to market have led to higher prices of many vegetable crops

At the end of December, Florida was 88% drought-free. Thanks to abundant rainfall, by the end of the month almost 99% of the state is drought-free. Lake Okeechobee levels are very high (16.14’’) following the exceptionally heavy rainfall in South Florida, which also required back-pumping of water into the lake to provide flood protection to surrounding areas. 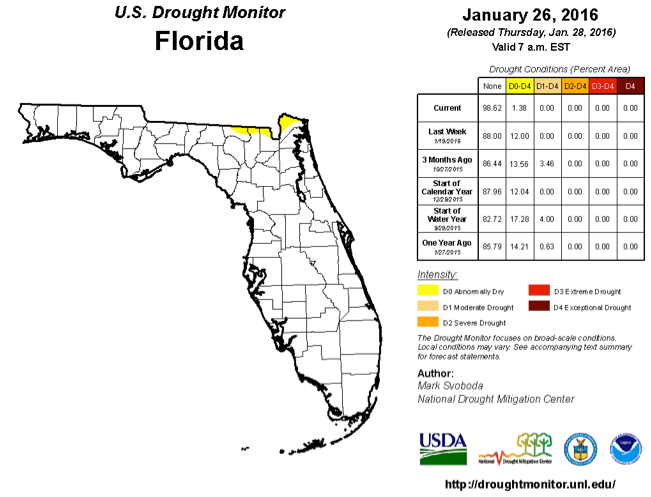