Rainfall totals were below normal across most of the state in January. With the exception of a small portion of the Big Bend, and areas in north Central Florida and the interior Peninsula, most of Florida saw below average rainfall during January (Figure 1). Departures from normal roughly ranged from -1.76” to 1.17” (Table 2 and Appendix 1), though localized parts of state saw rainfall totals that were as much as 4.00” below normal to over 3.00” above normal (Figure 1). The last three months (November – January) have been the 4th wettest on record in Ocala, the 6th wettest for both Daytona Beach and Tallahassee and the 12th wettest in Orlando. A trace of snow was reported in Jacksonville on the 8th. There were multiple 24-hour precipitation records broken for the month (Table 3). 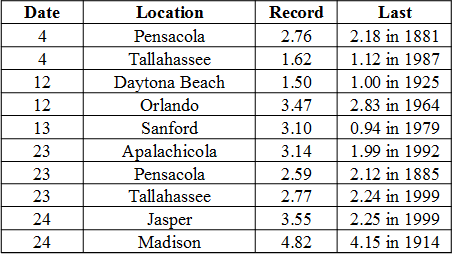 Figure 1: A graphical depiction of the monthly rainfall departure from normal (inches) for January is given in the figure below (courtesy of NOAA, NWS) 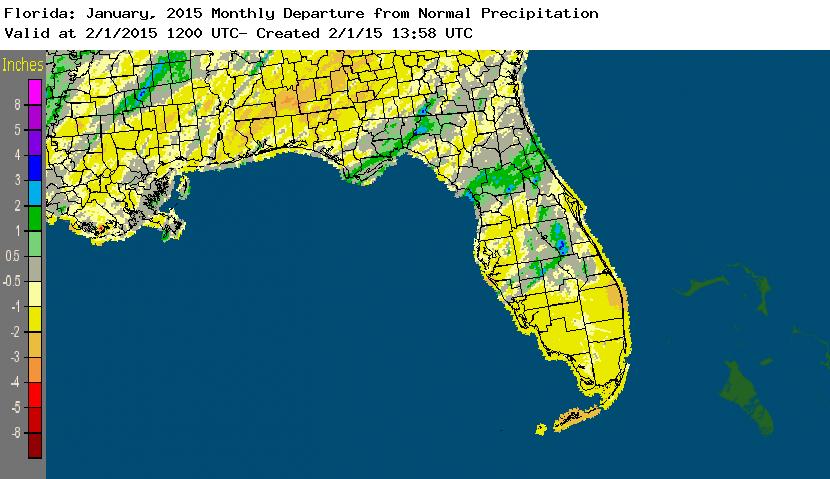 ENSO-Neutral Conditions Continue in the Pacific.
Based on current data and forecast models, the Climate Prediction Center (CPC) continue to have an El Niño Watch in place. Positive sea surface temperatures (SST) anomalies have been recorded across most of the Pacific Ocean and there is a 50% chance of an El Niño event developing within the next two months. After the Northern Hemisphere winter, a return to ENSO-Neutral conditions is favored. CPC predicts normal temperatures and precipitation across the state through April 2015.

Hazardous Weather Events in January.
There were a total of 61 severe weather reports made in Florida during January. It was a quiet month, in terms of severe weather, and only a few events caused hazardous weather across the state. Strong winds up to 50 mph were reported in various locations on the East Coast on the 8th, ahead of a cold front that moved through the state. On the same day, snow was spotted around the Jacksonville area, including at the Jacksonville International Airport. A waterspout was reported off the coast near Juno Beach on the 9th and was photographed by a number of the public. A CoCoRaHS observer recorded 3.57” of rain in 13 hours in St. Augustine in 12th. Most of the severe weather reports came from a vigorous low-pressure system that moved through the state on the 23rd – 24th. Heavy rains were reported in most of the Big Bend, including Bay, Liberty, Franklin, Wakulla, Leon, Jefferson and Madison counties. The heavy rains caused local rivers to rapidly rise and promoted flood warnings in some local areas On the 24th, the Florida State Watch in Myakka State Forest reported damage to a ranger station and residence that was associated with a tornado near Englewood (Sarasota County). Many locations in north Florida, such as St George Island, Apalachicola, Jacksonville and St. Augustine, saw wind gusts up to 50 mph as the front associated with the system pushed through the area. On the 26th, high winds up to 45 mph were recorded in Naples, Boca Raton, Miami and Key Largo.

Table 4: Breakdown of storm reports submitted in Florida during the month of January. (Compiled from Southeast Regional Climate Center.) 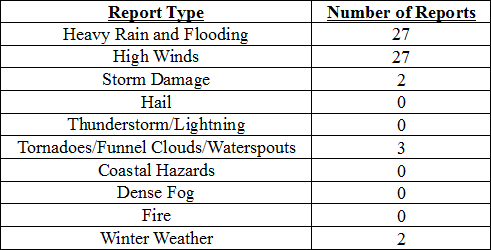 Agricultural and other climate related impacts.
At the beginning of January, soil moisture in the Panhandle was very high, but was seen short in other areas of the state. Pasture conditions in the northern part of the state improved due to the warmer weather and some of the rainfall. The sugarcane harvest continued in Glades and Hendry counties, and farmers started harvesting cabbage and cold weather crops in Flagler, Bradford and Putnam counties. Growers in southwest Florida began planting watermelons and spring vegetables and south Florida crops had to be irrigated. Some foggy mornings caused disease problems with vegetables in southwest Florida around mid-month, and heavy rains in the Panhandle and Big Bend caused problems with pasture conditions and field preparation. All of the citrus processing plants were up and running at full capacity. Totals were slightly less than last season, due to the small-size fruit and lagging maturity levels. Greening was a constant struggle for citrus growers across the state. The warmer weather did increase yields in some of the vegetable crops. Cotton harvest wrapped up in Gadsden County at the end of January. Due to the heavy rains, fieldwork and soil preparation for the spring planting were done on a limited basis. The cattle conditions across the state for the month were mostly good, while the winter forage and pasture conditions were fair to good. Citrus grove activities included running irrigation, fertilizing, spraying and combating greening and some fields noticed patchy pin head bloom on orange trees. The navel orange, colored and white grapefruit harvests came to an end for the season.

The beginning of the year started off with portions of the Florida Panhandle recovering from above average rainfall, while the rest of the state was below normal. As January progressed, widespread rain moved through the northern part of the state from the 4th – 5th, with the majority of the rainfall north of the Gainesville area. With the exception of some very localized light rain, the state remained dry until 12th, when a low-pressure system moved through, dropping over an inch of rainfall in central Florida. Drought conditions remained consistent in the Northwest Panhandle with abnormally dry (D0) conditions in Escambia, Santa Rosa, Okaloosa and Walton. However, the lack of rain in South Florida over the last 3 months lead to the introduction of D0 in Dade and Monroe counties by the middle of January. Two more rain events impacted the state- one of the 16th, which brought rain only to the Panhandle, and heavy rain was reported with the second event as it pushed through North Florida and parts of the Peninsula on the 23rd and 24th. However, the region surrounding Lake Okeechobee remained rain-free through the end of the month, promoting the expansion of D0 into Collier and Palm Beach counties. 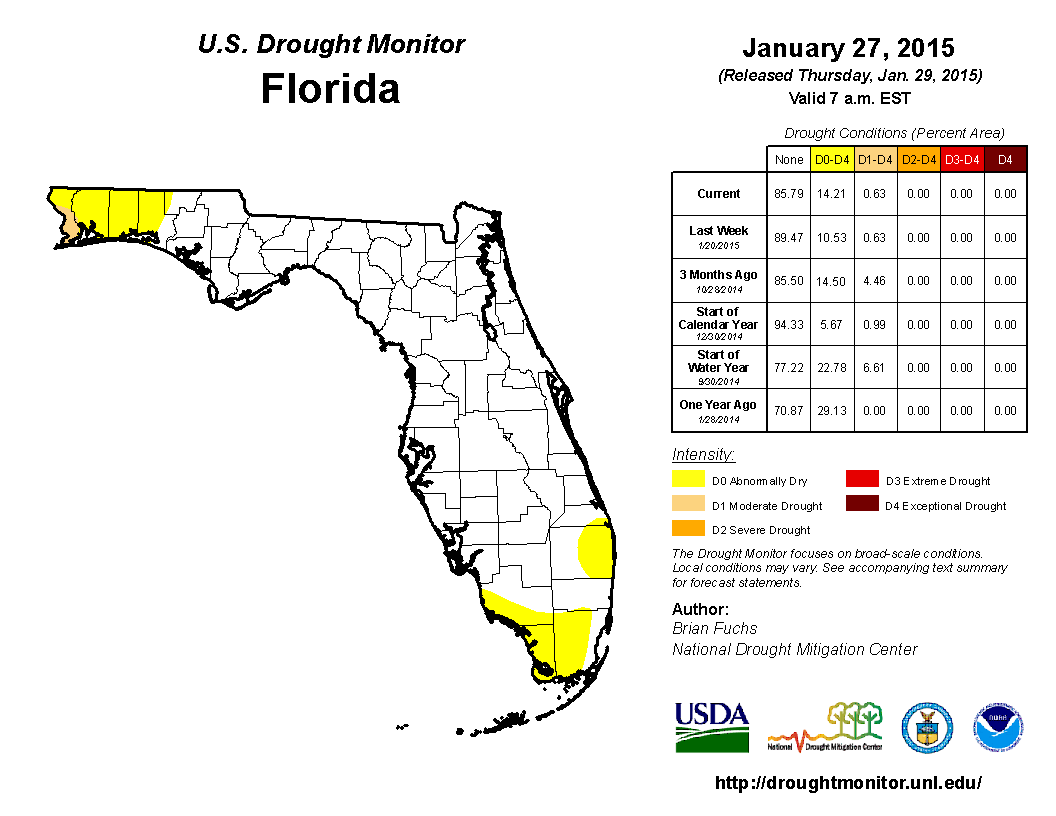 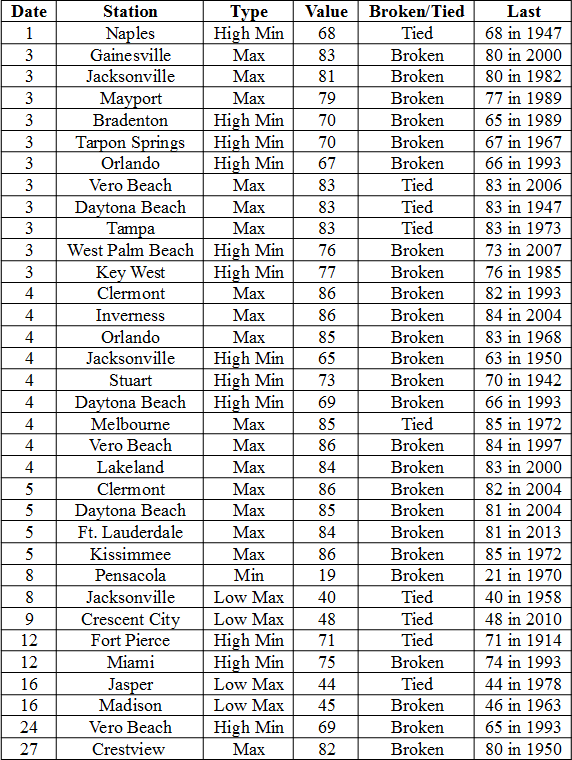