Average temperatures were below normal in January. The average temperatures for January 2014 were colder than normal across the entire state (Table 1 and Appendix 1). Departures from normal ranged from -0.2 ˚F in Key West to -5.4˚F in Pensacola. The monthly average temperatures for January 2014 were the 5th coldest in Madison and Pensacola, 7th coldest in Lake City, 8th coldest in Clermont, and 9th coldest in Gainesville, Inverness, and Orlando. On the 7th of January, a bitterly cold air mass pushed through the state, and locations north of Avon Park, with the exception of a few coastal stations, did not reach the 50˚F mark. Portions of the state, mainly in the Panhandle, did not get above 40˚F on the 29th. While there were a number of low maximum and minimum temperatures tied and broken during the month (121), there were also multiple maximum and high minimum temperatures that were broken or tied (Appendix 2).

Rainfall totals varied across the state in January. Portions of the Big Bend and Panhandle reported monthly rainfall totals below normal, while the rest of the state saw near to above average rainfall during January (Figure 1). Departures from normal roughly ranged from -1.18” to 4.64” (Table 2 and Appendix 1), though some areas of Florida saw rainfall totals that were as much as 4.00” below normal to over 8.00” above normal. There was a report of 22.20” of rainfall measured in Hypoluxo on January 9 – 10 from torrential downpours associated with a stalled front over portions of the east coast. Totals across the area ranged from 10 to 15”. January 2014 was the wettest on record in Fort Pierce, 3rd wettest in Melbourne, 4th wettest in West Palm Beach, 6th wettest in Jacksonville and Key West, and 10th wettest in Gainesville and Miami. There was 1” of snow reported in Pensacola on the 28th. Numerous 24-hour precipitation records were broken for the month (Table 3). 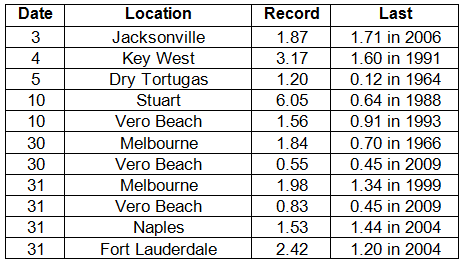 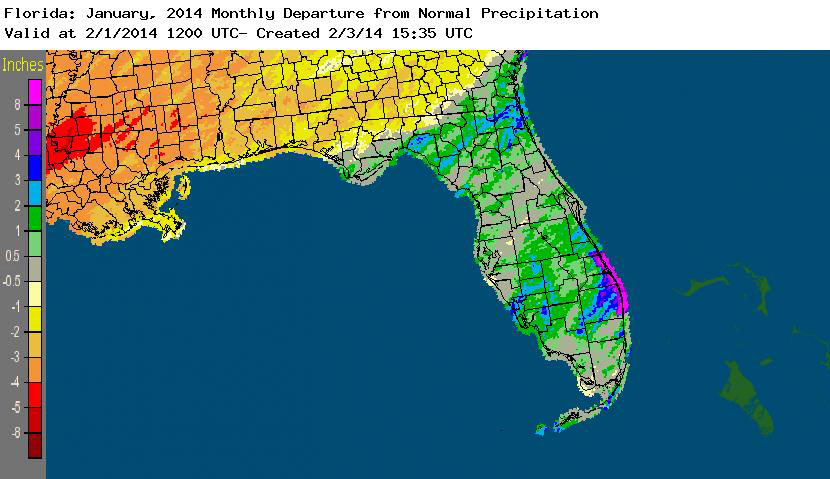 Hazardous weather events in January. 209 severe weather reports were recorded in Florida for the month of January; 50 of those reports were for winter weather — something that does not happen often in the state. The month started off with dense fog reported on the southern shore of Lake Okeechobee, which reduced visibilities to less than ¼ mile. Also on the 2nd, heavy rain and high winds were seen along parts of the northeast coast. Reports of non-thunderstorm-based high winds came in along the Florida Keys from the 5th through the 7th. Localized flooding and heavy rain were reported from Boca Raton to Stuart, when a cold front ‘backed up’ and funneled tropical moisture over the area, producing heavy rain rates (~15.00” in 3 hours) on the 9th and 10th. On the 11th, multiple reports of storm damage and high winds were made as thunderstorms pushed through the Big Bend and north Florida. A storm on the 21st produced hail (pea to quarter sized) along its track from Normandy, FL, to Jacksonville. Widespread dense fog was reported on the mornings of both the 27th and 28th for areas south and southeast of Lake Okeechobee. The end of the month saw the first widespread winter weather events for the state in over a decade, as reports of freezing rain, sleet, and snow were made across the entire northern part of the state. Accumulating freezing rain caused Interstate 10 to be closed from the Florida/Alabama line to just east of Tallahassee. Many school districts, businesses, and government offices closed for ‘snow days’ from the 28th through the 30th due to the icy conditions.

Agricultural and other climate-related impacts. Most of Florida reported rainfall and average temperatures at the beginning of January, which allowed for final harvesting of soybeans in the northern part of the state and the sugarcane to be processed without issue in Hendry, Palm Beach, and Glades counties. There was some frost and fungal damage to strawberries, collards, and turnips in Nassau County, and field workers were still reporting small sizes in all citrus varieties. The arctic air mass that impacted the state in early January did cause small damage to winter oats and contributed to pasture decline, while the winds associated with the cold front battered vegetable crops in Charlotte, Collier, Hendry, and Lee counties. Cold temperatures toward the end of the month caused some damage in cold-prone areas with frosted tops on plants, and there were losses in Bradford County due to frost and lower temperatures. Winter cover crops were being planted in the Panhandle. During the month, cattle and pasture conditions remained fair, though the prolonged dry conditions caused poor pasture conditions, and cattlemen used hay and supplements across the state to supplement forage.

The beginning of 2014 saw dry conditions reported in 25% of the state, with the main concentration of the dryness (D0) confined to portions of the Space Coast and through the area of the state known as the Florida Heartland (DeSoto, Glades, Hardee, Hendry, Highlands, and Okeechobee) to Collier County. The residual dry conditions that were in northern Santa Rosa County and along the Florida-Georgia line near Jacksonville were removed after rainfall early in the month. Conditions remained consistent through most of January, although, by the end of the month, the area of dryness along the east coast and peninsula had expanded to cover more of the interior of the state. D0 was reintroduced into portions of Escambia and Santa Rosa counties in the Panhandle on the 28th. The Climate Prediction Center is forecasting below normal precipitation for February, March, and April, which could limit the amount of rain received by northern parts of the state during a critical recharge season.

Figure 2: Drought conditions in Florida as of January 28, 2014 (courtesy of U.S. Drought Monitor). 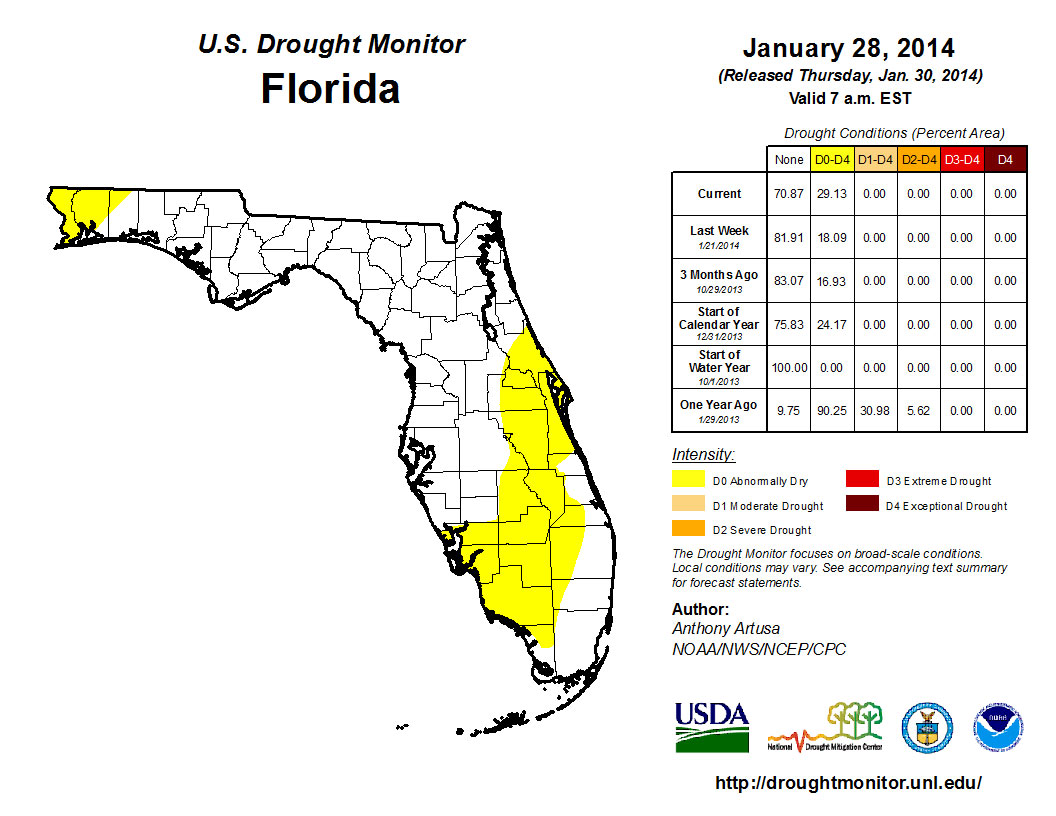 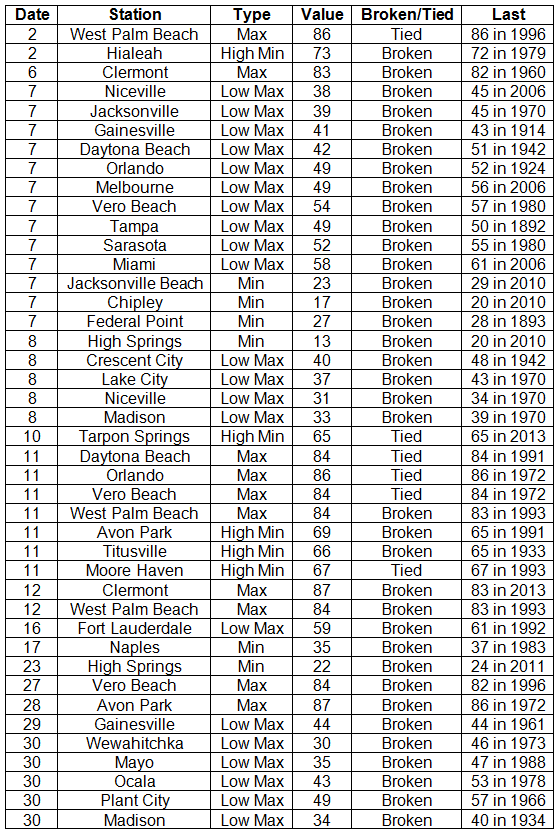