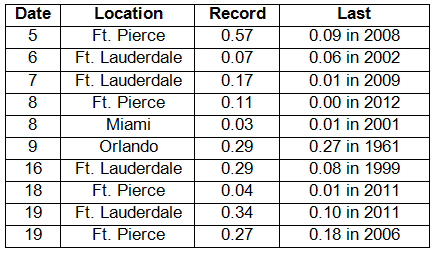 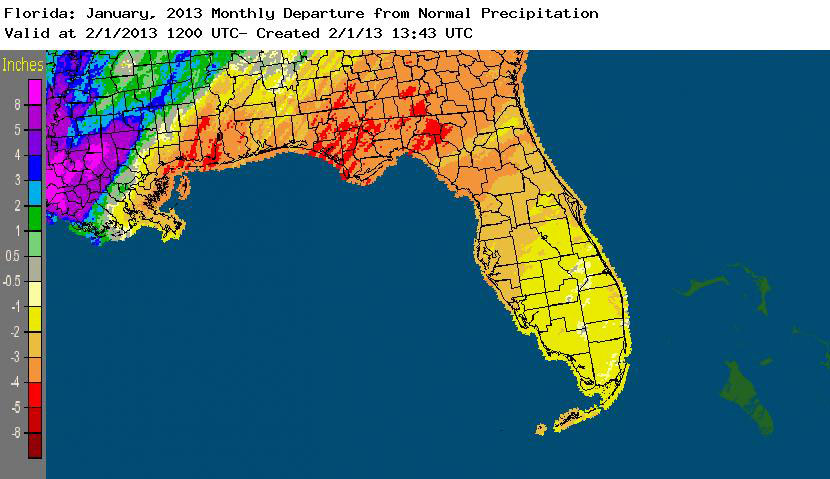 ENSO-neutral conditions continue in the Pacific. As of January 29th, neutral ENSO conditions continue to be reported for the equatorial Pacific. Equatorial sea surface temperatures (SST) are near average to below average across the Pacific Ocean. ENSO-neutral conditions are expected to continue through the spring 2013. The Climate Prediction Center (CPC) predicts normal temperatures for the state, and they are also predicting below normal precipitation in the western Panhandle and north Florida through April.

Hazardous weather events in January. January was a fairly quite month for severe weather across the state with only 46 severe weather reports. Areas south and southwest of Lake Okeechobee saw numerous days during the beginning of the month with dense fog, especially along portions of Alligator Alley, where visibilities were reduced to less than ¼ of a mile. On the 12th, a brush wildfire near Port Saint John in Brevard County burned over 1,000 acres and caused some road closures. Most of the severe weather reports for the month were made during the 29th and 30th as a vigorous cold front moved through the state. Multiple reports of storm damage (downed power lines and trees) came in from various locations along the Panhandle, such as Fort Walton Beach, Chipley, Quincy, and Dowling Park, just to name a few. A waterspout was also reported on the 30th just off the coast of Pensacola Beach, FL. High winds were recorded with the front as it pushed through the northern part of the state. Wind gusts ranged from 42mph reported at Fernandina Beach to 66mph recorded at Tyndall Air Force Base near Panama City Beach, FL.

Table 4: Breakdown of storm reports submitted in Florida during the month of January (compiled from Southeast Regional Climate Center).

Agricultural and other climate-related impacts. Winter crops did well despite the slow start to the season due to lack of rain. Sugar cane harvesting continued through January, and areas of the state began preparations for spring planting. The warm weather at the beginning of the month caused some trees/plants to start budding early, such as mangoes, avocadoes, peaches, and pecans, while the strawberry crop thrived in the warm temperatures. Many fruit trees needed more chill hours to produce good yields. During the month, there were a few nights where lows were near/below freezing, but fruit and tree damage was either light or avoided. The sparse rainfall worsened conditions in citrus producing areas and limited the growth and production of winter forage.

Statewide rainfall totals were roughly 25% of normal over the last few weeks, causing negative effects on drought conditions in the state. Many rivers across the state are reporting below average stream flow levels. Winter is an important recharge season for portions of north Florida (Panhandle and the north part of the peninsula), while south Florida is typically dry during the season. Due to the below normal rainfall totals, the area of dry/drought coverage expanded from about 43% on December 25th to roughly 90% as of the January 29th release of the Drought Monitor. The biggest changes were seen in the Panhandle and especially along the state lines between Florida and Alabama/Georgia. Most of the area north of a line from the Steinhatchee Conservation Area to St. Augustine is listed as having moderate drought conditions (D1), while along the state line, conditions are worse with severe drought conditions (D2). The peninsula has not escaped the deteriorating conditions either. Only a few counties (Charlotte, Lee, Glades, Highlands, Okeechobee, Indian River, St. Lucie and Martin) still have areas that are not listed as experiencing dry conditions.

Figure 2: Drought conditions in Florida as of January 29, 2013 (courtesy of U.S. Drought Monitor). 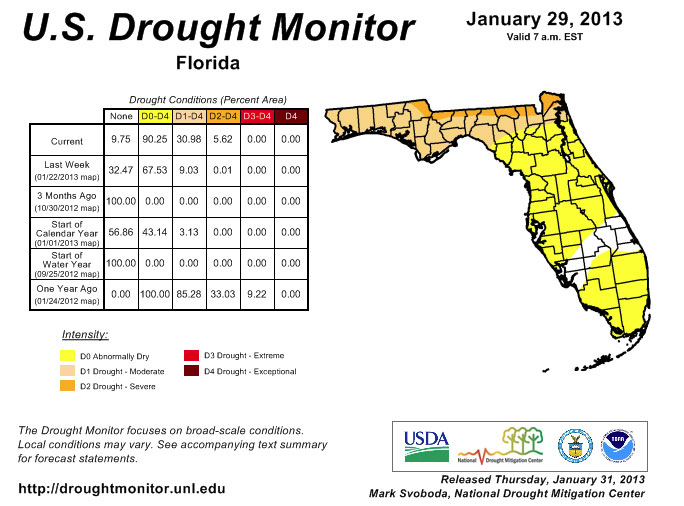 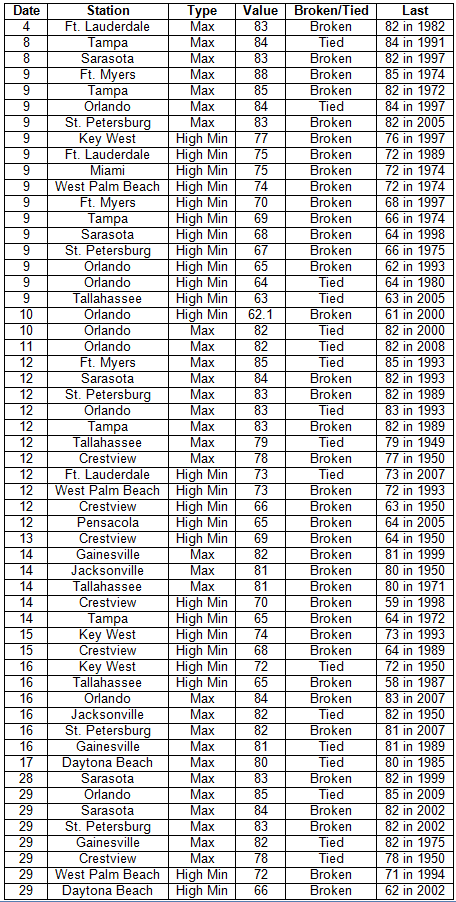