Average temperatures were mainly above normal in January. Average temperatures were above normal for most of the state, with the exception of Orlando (Table 1). Departures from normal ranged from -0.8°F at Orlando to a staggering 6.8°F at Pensacola. The warmer temperatures have the public and some media outlets calling this "The Year Without a Winter." Unlike the Januarys of 2010 and 2011, there was very little cold air that made it into Florida. There were two strong cold fronts that passed through the state at the beginning of the month, leading to record low temperatures being tied and broken on the 3rd and 4th (Appendix). For the rest of the month, most of the state experienced warmer than normal temperatures that are typically reported with La Niña conditions, and various record high temperatures were tied and broken at the end of the month (Appendix).

Rainfall totals below normal statewide in January. Rainfall totals were below normal statewide in January (Table 2). North Florida and the Panhandle had 2 inches or more below typical rainfall amounts for the month, which compounded the drought problems that have been lingering since October 2010. The month was the driest on record at Orlando and was the 4th driest on record at Jacksonville. Though rainfall was scarce across the state, there were a few daily precipitation records that were broken during January (Table 3). Areal patterns of monthly rainfall relative to normal are depicted in Figure 1. 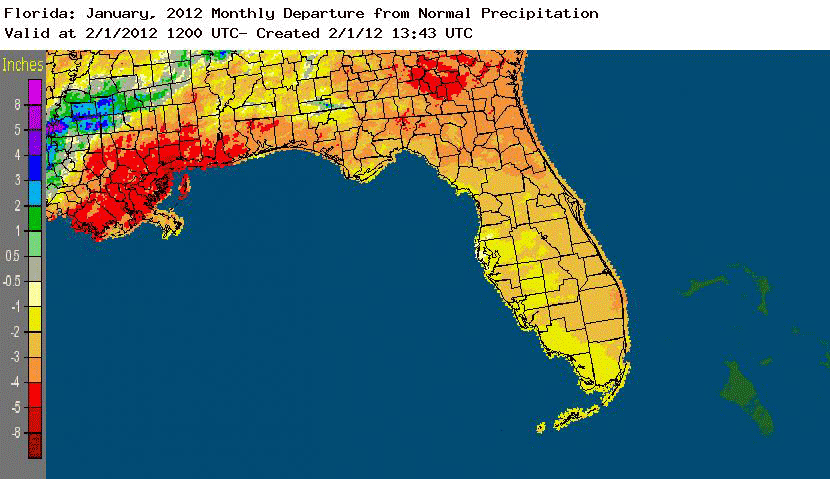 La Niña continued during January. La Niña conditions continue to be present across the equatorial Pacific, with sea surface temperatures (SST) at least 0.5°C below average for the region. The atmospheric circulation anomalies and winds are consistent with La Nintilde;a. The current La Nintilde;a is forecasted to continue through the winter of 2011/2012 into the spring, with the possibility of a return to neutral conditions by the summer. The Climate Prediction Center continues to predict warmer than normal temperatures and below normal precipitation through May.

Hazardous weather. A variety of hazardous weather events took place in January. Portions of northern Florida were impacted by high winds from a passing cold front at the beginning of the month. Dense fog was reported in the Panhandle on the 7th and 8th, with visibilities below 0.25 miles. Another passing cold front brought high winds to most of the state with wind gusts of at least 40 mph reported from locations near Pensacola, Jacksonville, and Tampa; while a 58 mph wind gust was recorded near Key West. Storm damage was reported with a vigorous squall line that moved through portions of the Panhandle on the 26th. Reports of trees being felled were received from both Walton and Leon Counties. An EF-1 tornado passed through Port Charlotte on the 27th, damaging a few homes and an apartment complex along its 0.75 mile path.

January also marks the beginning of the wildfire season in Florida, though there have been fires actively burning since fall 2011. Smoke from the Olive Fire, which has burned about 1,000 acres in Putnam County since Thanksgiving 2011, combined with fog to cause visibility problems and accidents at the beginning of the month. Towards the end of the month, the Payne's Prairie wildfire reduced visibilities along portions of US 441 and Interstate 75 and may have been the cause of a deadly accident that took 10 lives in the early morning hours of the 29th. On the 30th, another wildfire in Baker County was reported, causing travel headaches for motorists travelling on Interstate 10 just west of Jacksonville.

Agricultural and other impacts. Freezing temperatures on the 4th-5th caused damage to crops in the interior portions of the state. Fruit and vegetable growers reported freeze damage to snap beans and flowering squash plants. Green beans in Palm Beach County suffered significant damage, with about half of the crop destroyed. Another cold snap the following week led to the use of sprinklers in order to protect the strawberry crop, while the sugarcane crop was assessed for damage. The continued dryness across the state compounded the effects of existing low soil moisture levels.

At the beginning of January, about 91% of the state had designated drought conditions; by the end of the month, every part of the state was experiencing drought, with about 86% of the state in moderate drought. The Panhandle continues to be plagued with extreme drought, with some of the areas that had seen improvements in December drying out once again. Manatee, Sarasota, De Soto, and Hardee Counties went from abnormally dry to severe drought during January. Continued La Niña conditions through the remainder of winter and into spring will mean decreased precipitation, and water restrictions remain in place in South Florida (the water level of Lake Okeechobee is now 13.31 ft) and restrictions in other areas could go into effect.

Figure 2: Drought conditions in Florida as of January 24, 2012 (courtesy of U.S. Drought Monitor). 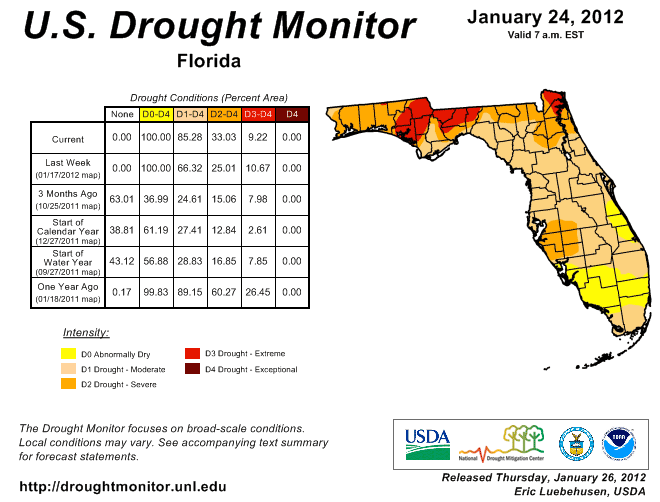 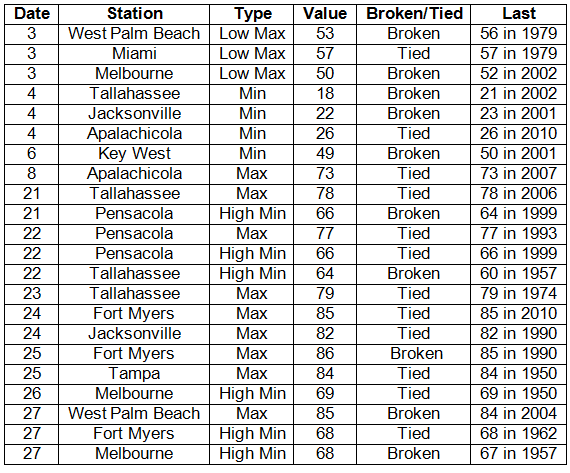