January rainfall generally above normal in northern areas and below normal in central and southern areas. Rainfall totals for January were somewhat above normal at northern stations, while totals were below normal across most of central and southern Florida (Table 2). Heaviest rainfall occurred as surface low pressure systems moved across the Southeast to the north of the state. Monthly rainfall at Tallahassee (8.09 inches) produced the tenth wettest January on record. Also, Tallahassee set daily records of 2.04 inches on the 16th and 4.66 inches on the 21st. Among other daily records were 1.71 inches at Jacksonville and 1.85 inches at Gainesville on the 21st, then 2.45 inches at Orlando on the 22nd.

A graphical depiction of the monthly rainfall departure from normal (inches) for January is given in the figure below (courtesy of NOAA, NWS). Amounts of more than eight inches above normal are evident in the northwest. 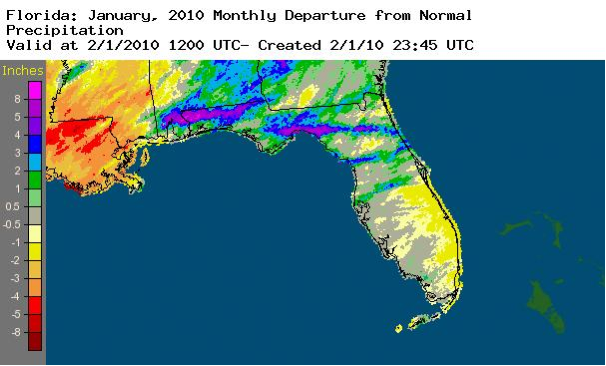 Hazardous weather. January 21 was an active day of severe storms across north Florida. On the 21st, hail up to golfball-size (1.75 inch diameter) was observed near Crawfordville and Green Cove Springs, a tornado occurred near Starke, and numerous reports of thunderstorm wind damage were received from the Panhandle eastward to the Atlantic coast. Wind damage was also reported near Ocala and Thonotosassa. As a cold front moved down the peninsula on the 22nd, a weak tornado toppled trees and caused minor structural damage as it traveled along a six-mile path in Brevard County.

Agricultural and other impacts. The U.S. Department of Agriculture declared nearly all Florida counties as natural disaster areas after record cold struck in early and mid-January. Growers and grower groups say the cold damaged a minimum of a third of the state's winter produce and up to 75% of south Florida vegetables. There were significant losses to sugarcane, beans, squash, tomatoes and strawberries. Citrus producers harvested as much fruit as possible while it was still marketable. Heavy rain and cold in north Florida adversely affected pastures and potato planting. Toward the end of the month, more seasonable temperatures allowed some pasture recovery. Use of irrigation to prevent freezing of crops in west central Florida greatly lowered the aquifer. Numerous sinkholes have opened, producing damage to structures and closing highways. Additionally, many private wells have gone dry.