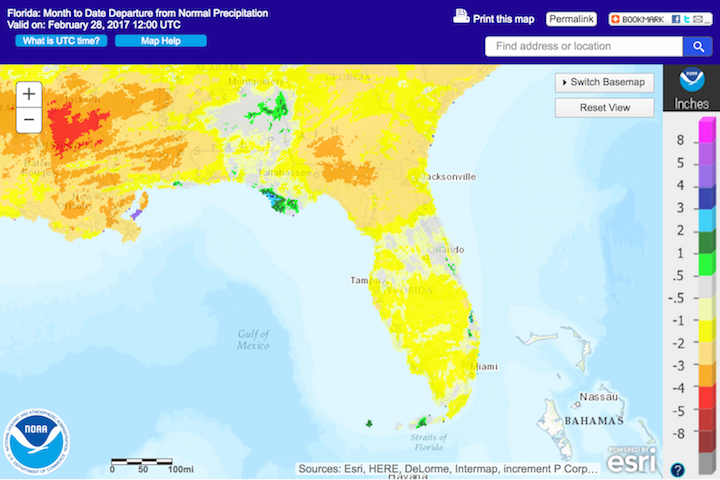 ENSO-neutral conditions are Present in the Pacific

Based on current data and forecast models, the Climate Prediction Center (CPC) has issued a Final La Niña Advisory. ENSO-neutral conditions are currently present, with sea surface temperatures (SST) near normal across the central and east-central Pacific Ocean, and above normal in the eastern Pacific Ocean. ENSO-neutral conditions are favored until mid-2017, with a possibility of El Niño by November 2017.  The CPC seasonal outlook favors above-normal temperatures and near-normal precipitation through May 2017.

There were 187 hazardous weather reports issued in Florida in February 2017. A large proportion of these events (117, or over 60% of the total) were made on just one day, the 7th, when a deep upper level trough and enhanced southerly flow bringing moisture from the Gulf led to the development of a large complex of thunderstorms and severe weather across the North Florida. A number of thunderstorms were accompanied by hail, particularly in Alachua, Levy, and Columbia Counties. Severe weather that day included a weak tornado touchdown in Bradford County that caused damage to a local school and downed trees and power lines. An EF1 tornado with peak winds near 100mph, track length 0.6 miles, and track width of 0.1 miles was confirmed in St. Johns County. Thunderstorm wind gusts in excess of 40 mph and up to 60mph were reported in Columbia, Alachua, Clay, Duval, St. Johns, Brevard, and Volusia Counties. Gusts of 87mph were recorded in Okaloosa County. Uprooted trees caused several injuries in Okaloosa and Clay Counties, and a fatality in Calhoun County. Numerous storm damage reports of downed trees and powerlines, trees fallen on homes and vehicles or blocking roads, and damage to roofs and building structures came from Santa Rosa, Okaloosa, Walton, Holmes, Washington, Bay, Jackson, Calhoun, Gulf, Gadsden, Liberty, Leon, Wakulla, Jefferson, Madison, Taylor, La Fayette, Columbia, Gilchrist, Levy, Union, Bradford, Alachua, Nassau, Duval, Clay, and St Johns Counties. Lightning strike damage to a building was reported in Santa Rosa County.

On February 15th a passing cold front brought strong winds to the northeastern portion of the state. Non-thunderstorm wind gusts in excess of 40mph were recorded in Alachua, Duval, Marion, St. Johns, Columbia, Osceola, and Volusia Counties.  A funnel cloud was spotted in Sumter County but did not touch down. Nickel-size hail was reported in Volusia County.

Dense fog was reported in the South Florida area on the 9th, with very low visibility causing dangerous driving conditions in Broward, Miami-Dade, Glades, and Hendry County, and problems at Miami International Airport and Fort Lauderdale International Airport. Dense fog was also reported on the 15th in Glades and Palm Beach County roads. Low visibility because of a wildfire smoke caused in several traffic accidents and prompted road closures in Polk County on the 17th. The fire consumed more than 4000 acres and destroyed nine mobile homes, two single-family dwellings, and several vehicles; over 800 homes were briefly ordered to evacuate.

Despite the overall dry weather for the month, there were several isolated heavy rain events throughout the month. Observers recorded daily totals of up to 3.6 inches in Brevard County on the 22nd, and up to 5.8 inches in Martin County on the 28th.

Two heat-related fatalities were reported this month, both involving young children left in a vehicle. An additional weather-related fatality resulted from rough surf and rip currents.

Table 4: Breakdown of storm reports submitted in Florida during the month of February (Compiled from Southeast Regional Climate Center.) 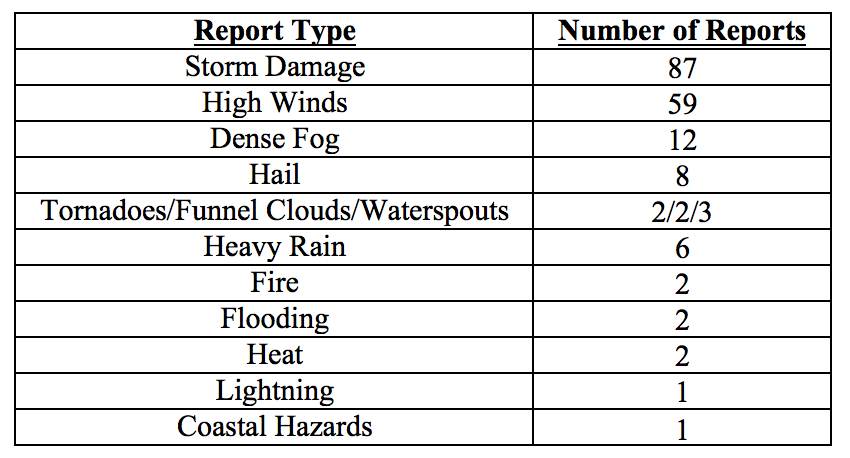 TAt the end of January, approximately 38% of the state, including the entire Panhandle, was drought free. The remaining 62%, constituting most of Peninsular Florida, were affected by abnormally dry (D0) conditions. By mid-month, much of South Central and parts of South Florida (including Manatee, Hardee, the southern portions of Polk, Osceola, and Brevard, Sarasota, De Soto, Highlands, Okeechobee, Indian River, Charlotte, Glades, Saint Lucie, Martin, Lee, Hendry, Collier, Palm Beach, and northwestern Broward County) had transitioned from D0 to moderate drought (D1) conditions. This remains the situation as of the latest Drought Monitor Report, issued on February 23, with approximately 35% of the state drought-free, nearly 40% under D0, and 25% under D1 conditions. Based on census data, roughly 3.8 million Florida citizens are currently impacted by drought.  Due to the dry conditions, burn bans are in effect in Okeechobee, Glades, and Hendry Counties. Lake Okeechobee water levels at the end of the month were at 13.45 ft., which is below average for this time of the year. 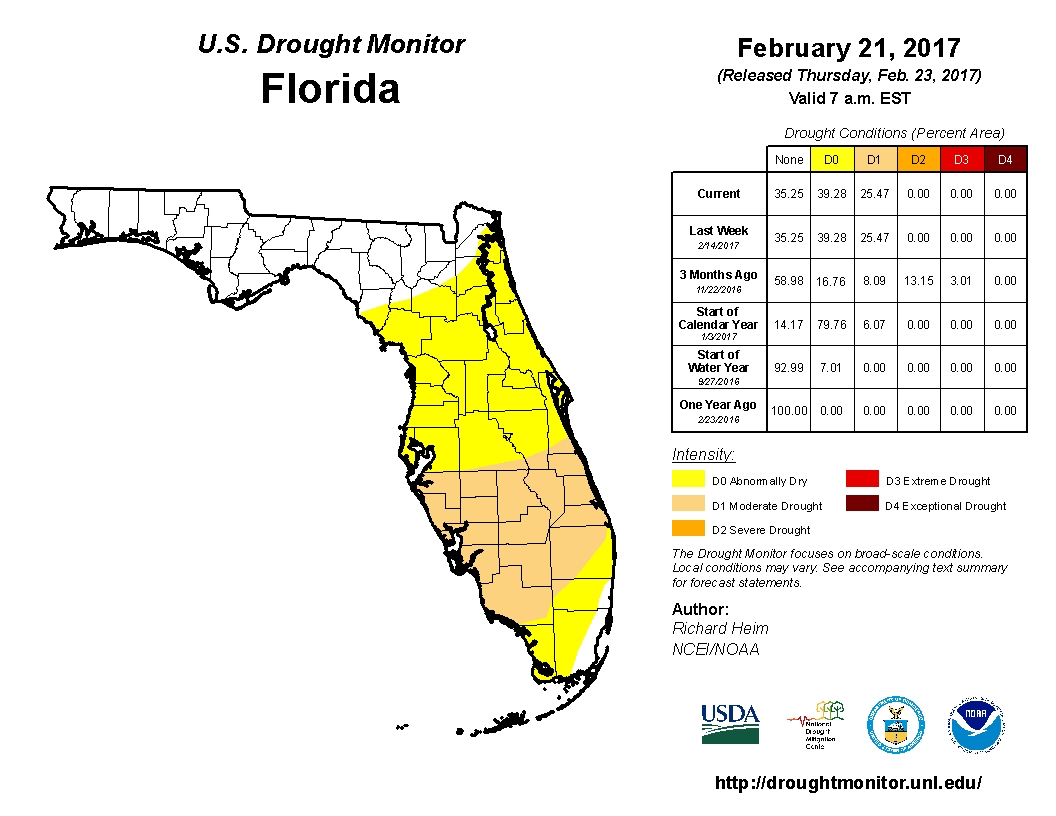 Topsoil moisture levels at the beginning of the month were mostly adequate (46%) to short (39%). Some very short (10%) and surplus (5%) values were also reported. Most of peninsular Florida has been experiencing abnormally dry or moderate drought conditions, and temperatures have been mostly above normal.

Citrus groves have been heavy irrigated to compensate for the prolonged dry conditions, despite brief showers over portions of the citrus growing region. Ditches and canals are running low. Grapefruit harvest has continued at a steady pace, while tangerine harvest has been increasing, despite overall amounts being relatively low. The early orange harvest has continuously decreased throughout the month. Blooming is widespread and at various stages.

Pasture quality has continued its seasonal decline. Pastures in many parts of the state have been brown due to dry conditions across much of the states, and most ranchers are providing supplemental feed. There have been reports of improving pasture conditions in Indian River and Brevard Counties where cattle have had access to good grazing. Overall, most cattle remain in fair to good condition.

Fruit and vegetable growers saw some damage from high winds. Unseasonably warm temperatures have caused early maturing and underweight harvest for some cool weather crops in Palm Beach County. Some producers in Dixie and Gilchrist are planting melons earlier than usual. 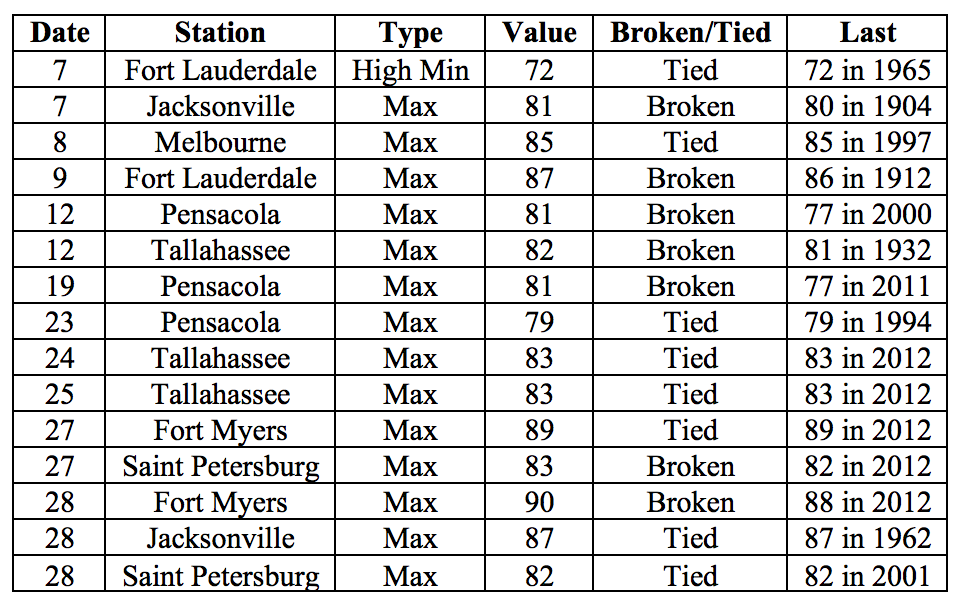