Rainfall totals in February were varied across the state. Rainfall amounts around the state were varied (Figure 1). Major reporting stations registered departures from normal ranging from -0.9” in St Petersburg to +2.23” at Key West (Table 2 and Appendix 1), although localized parts of the state saw rainfall totals that were as much as 3” below normal to 8” above normal (Figure 1). There were very few 24-hour precipitation records broken for the month (Table 3). As a whole, the winter season (December 2015 through February 2016) was the wettest on record for Fort Myers, Miami, and Vero Beach, and among the top three wettest on record for most South Florida stations. 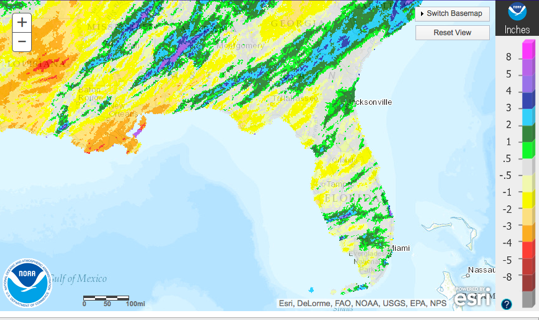 Based on current data and forecast models, the Climate Prediction Center (CPC) will keep the ENSO Alert System at an El Niño Advisory. El Niño conditions remain present, and positive equatorial sea surface temperatures (SST) anomalies continue across most of the Pacific Ocean.CPC expects the El Niño conditions will transition into ENSO-neutral during late spring or early summer 2016, with a possible transition to La Niña conditions in early fall. The seasonal outlook through April 2016 indicates an increased likelihood of above-normal rainfall and near-normal temperatures for Florida.

There were a total of 269 severe weather reports made in Florida during February. The bulk of these (208) were the result of just two cold front systems and their associated squall lines sweeping over the state on 15-16th (95 reports) and 23-24th (113 reports). Both systems produced high winds across the state, caused multiple instances of storm damage from Pensacola to Miami, and even spawned several tornadoes. Between 15th and 16th, tornadoes were spotted in Escambia, Jackson, Glades, Collier, Broward, and Miami-Dade Counties. Some of these caused significant damage to structures, as well as downed trees and power lines. The most significant tornado, categorized as an EF3, with winds as high as 155mph, touched down in Pensacola in the late evening of Feb 23. Damage assessment documented at least 37 destroyed, 76 major and 100 minor damaged structures in its path but fortunately no fatalities. The amount of destruction prompted the declaration of a state of emergency for Escambia and Santa Rosa counties.

Table 4: Breakdown of storm reports submitted in Florida during the month of February (Compiled from Southeast Regional Climate Center.)

Following the heavy rains in January, at the beginning of February most reported topsoil moisture levels were either adequate (51%), or surplus (45%). By the end of the month, the proportion of surplus levels has been reduced to 33%, and 60% of topsoil levels are reported as adequate. Winter wheat and other grains have suffered some damage due to excessive rains over the preceding weeks. Fields in some northern counties that had been negatively affected by heavy rains in January had dried out sufficiently by mid-month to allow for the beginning of spring planting preparations. Subsequent rains have slowed these efforts down. Excessive rain and below-normal temperatures over the past several weeks in South Florida have impacted vegetable production, reducing quality and quantity of yields. Citrus harvesting is proceeding with slight delays in some areas due to rain, and with irrigation in areas that have experienced only light rain over the past weeks. Pasture ratings across the state are mostly in the “fair” category (41%), followed by “good” (32%) and “poor” (20%). Pastures in some counties (Jackson, Washington, Dixie, Orange, Seminole) were in poor condition due to previous flooding and frost. Some ranchers are providing supplemental feed to compensate for the reduced pasture quality. Warmer weather and increasing daylight times are expected to improve pasture conditions.

According to the US Drought Monitor, at the end of January, 99% of the state was drought-free. As of the most recent report, issued on February 23, the entire state is drought-free. As a consequence of the record seasonal rainfall amounts in South Florida, water level in Lake Okeechobee at the end of the month were unusually high - about 15.89’, or 1.38’ above normal for this time of the year. To provide relief from these high water levels and afford flood protection for downstream areas, water managers in the region are pumping some of the excess water into a large water detainment facility in Miami-Dade County.