Rainfall totals varied across the state in February. Portions of the Big Bend and Panhandle, reported monthly rainfall totals near average or slightly above normal, while the rest of the state saw near to above average rainfall during February (Figure 1). Departures from normal roughly ranged from -1.61” to 2.82” (Table 2 and Appendix 1), though localized parts of Florida saw rainfall totals that were as much as 3.00” below normal to over 4.00” above normal. There was only one 24-hour precipitation record broken for the month (Table 3). 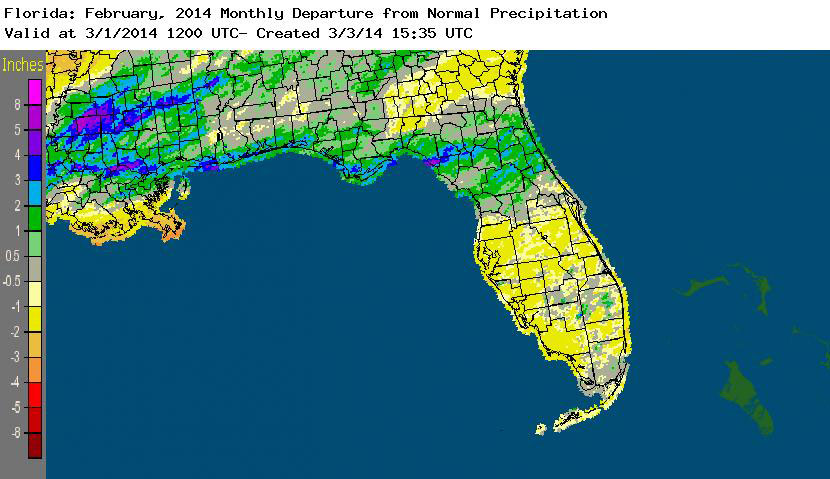 ENSO-neutral conditions continue in the Pacific. Neutral ENSO conditions continue to be reported for the equatorial Pacific with the equatorial sea surface temperatures (SST) above average across in the western Pacific, with regions of below average SST in the eastern Pacific. ENSO-neutral conditions are favored to continue through the spring of 2014, with a potential El Nino forming in the summer. The Climate Prediction Center (CPC) predicts above normal temperatures across the entire state and below normal precipitation for the Florida Panhandle through May.

Hazardous weather events in February. There were 144 total severe weather reports were recorded in Florida for the month of February. The month started off with reports of dense fog on the 1st, 2nd and 3rd in portions of southern Florida. Areas south of Lake Okeechobee reported visibilities less than1/4 mile during the morning hours, impacting both inland and coastal communities. These same areas recorded dense fog on the morning of the 8th, with one report stating, “ Visibilities of 200-300 yards reported in Belle Glade.” A low-pressure system and associated stationary front on the 12t produced a line of thunderstorms that caused storm damage, with multiple reports of hail (pea to quarter sized), heavy rain high wind (up to 60 mph) as it pushed through the Peninsula. 73 storm reports came in from 15 counties on the 12th, with a report of a tornado in Fort Meade, FL that blew off a roof and porch of a structure, and lightning that started a house fire in Tampa, FL. A cold front raced through the northern part of the state on the 21st, producing high winds and hail along its path. There were multiple reports of trees and power lines down, with a report of an 18-wheeler being flipped over in Escambia County and a funnel cloud with 1” diameter hail in Putnam County. On the morning of the 23rd, an area of disturbed weather produced heavy rains, which caused flooding along portions of US 98 in Bay County, along with multiple reports of golf ball sized hail. Later on the 23rd, areas near Gainesville, Ocala, Daytona Beach and Orlando were impacted by hail and high winds from the same storm system. 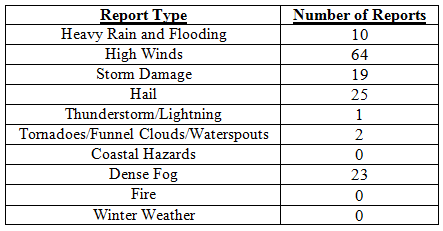 Agricultural and other climate-related impacts. The majority of the state saw temperatures that ranged from the upper 60s to the low 80s at the beginning of the month. The cold weather from the last week in January slowed the growth of winter wheat and caused a decline in the pasture conditions in northern parts of the state. The rain and foggy weather increased disease in vegetables, with reports of late blight being reported in tomatoes and potatoes. The citrus area received widespread rain and the active commercial groves in the state were drought free; but fruit sizes were still small on all varieties. Cloudy, cool wet conditions hampered fieldwork and crop growth by mid month. Various fruits and vegetables were marketed, while sugarcane and strawberries entered the last weeks of harvest. Citrus growers in Indian River experimented with tenting younger trees to help combat the psyllid population that had caused greening. The end of February saw farmers in Washington and Gadsden counties preparing ground for peanut and corn planting. Grover managers were reporting various sizes in the same blocks and have noticed blooms in several of the more southern citrus growing areas, signaling the beginning of next year’s crop. Citrus greening was still an issue and preventative measures were being taken to protect unaffected trees. Cattle conditions during the month were good, while pasture conditions were mostly fair; promoting cattlemen to feed hay and supplements.

At the end of January nearly 30% of the state was characterized as dry, with the main concentration of the dryness (D0) confined to portions of the Space Coast and through the Okeechobee watershed into interior portions of the state to southwestern coast from Lee to Collier counties; and there was a small area of dryness reported in Escambia and Santa Rosa counties. Rains in the early part of the month eased most of D0 conditions in the Peninsula, with only Volusia, Seminole, Orange and Brevard counties showing dry conditions on the February 4th release of the Drought Monitor. By the 18th of the month, rainfall over portions of the east coast had led to an improvement of the lingering dry conditions and the only dry conditions left in the sate at the month’s end were those in the northwest Panhandle. The Climate Prediction Center is forecasting for precipitation to be below normal for March, April and May, in the Panhandle, while else where, precipitation is expected to be near normal as the state begins the transition in to the dry spring season.

Figure 2: Drought conditions in Florida as of February 25, 2014 (courtesy of U.S. Drought Monitor). 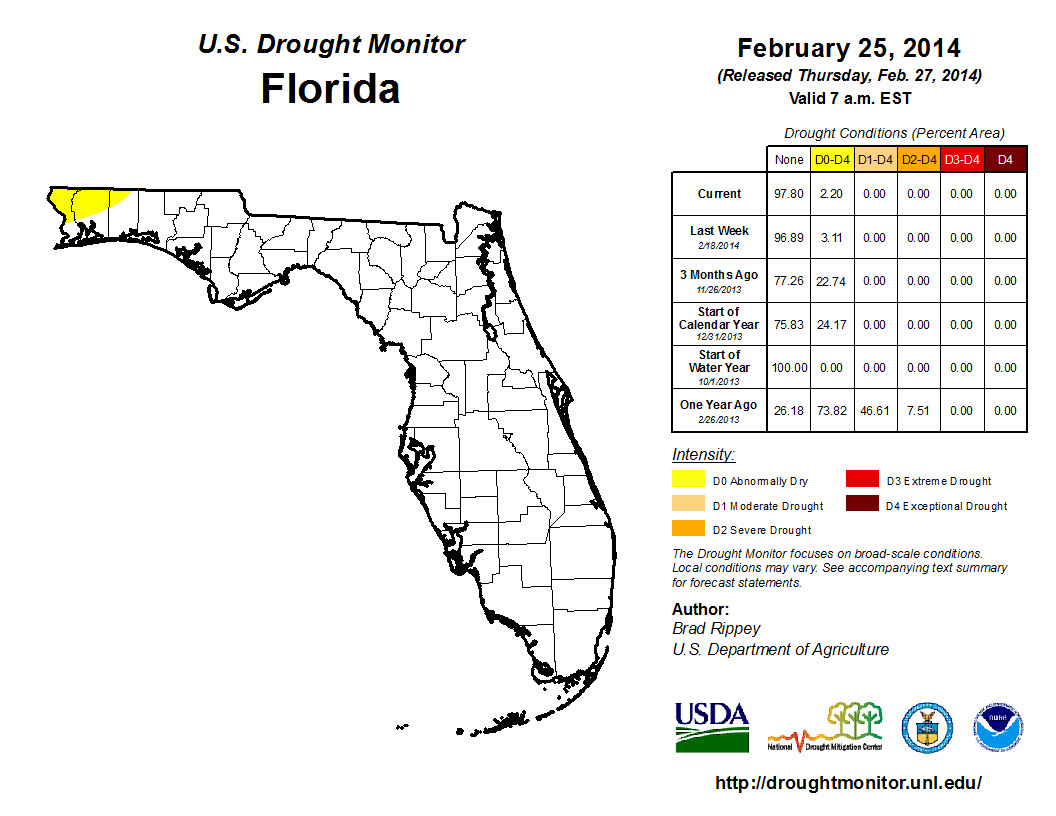 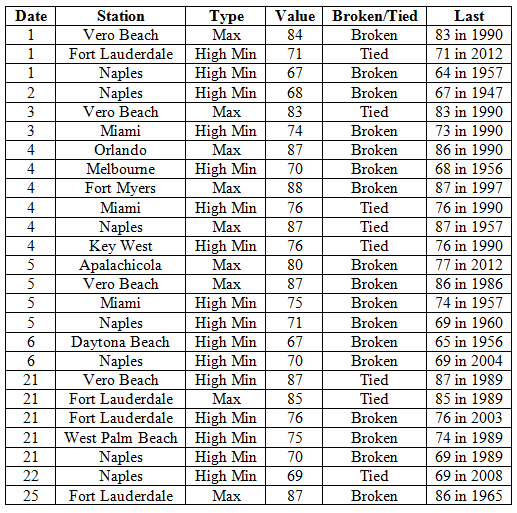