Rainfall totals varied across the state in February. Rainfall totals across the state varied in February (Table 2), with the Panhandle and Big Bend regions of the state reporting 3 to 8 inches above normal rainfall, while portions of the peninsula and south Florida were 1 to 3 inches below normal precipitation (Figure 1). February 2013 was the wettest on record for both Pensacola and Tallahassee. Multiple precipitation records were broken in February (Table 3), and three of those records were from Tallahassee during a 5-day-long significant rainfall event at the end of the month. The above normal rainfall helped eased drought conditions in some of the northern counties, but there are still drought concerns as the 3-month outlooks predict below normal rainfall for the spring dry season. 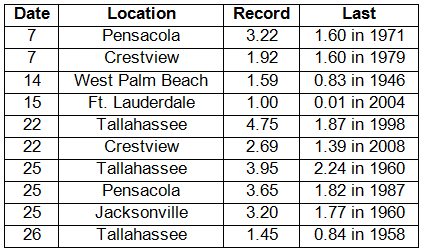 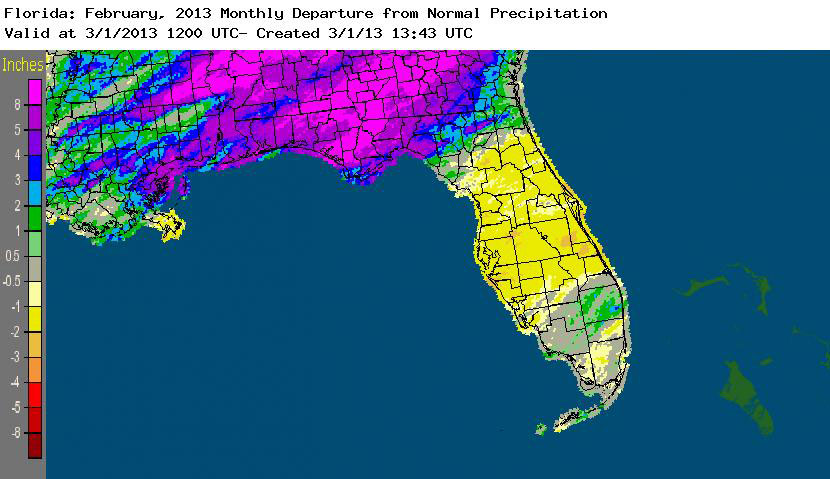 ENSO-neutral conditions continue in the Pacific. As of February 25th, neutral ENSO conditions continue to be reported for the equatorial Pacific. Equatorial sea surface temperatures (SST) are near average to below average across the Pacific Ocean. ENSO-neutral conditions are expected to continue through the spring. The atmospheric circulation during February was somewhat variable due to an active Madden-Julian Oscillation (MJO). The Climate Prediction Center (CPC) predicts above normal temperatures for the state; they are also predicting below normal precipitation for Florida through May.

Hazardous weather events in February. February was a fairly active month for severe weather across the state when compared with January 2013. There were 161 severe weather reports made in the 28-day month. Multiple reports of a waterspout off the coast of Pidgeon Key were made on the 6th. On the 7th, a waterspout moved on shore near Santa Rosa Beach and caused some property damage. Also on the 7th, there were reports of high winds along the central west coast of Florida, with the highest wind report (42 mph) from downtown Tampa. A prescribed burn broke though a containment line near Barberville on the 11th and spread to 450 acres, prompting some evacuations and road closures. Also on the 11th, a severe thunderstorm produced hail and damaging winds in and around Panama City Beach along with multiple waterspouts off the coast of St. Andrew’s State Park. High winds were reported along the Keys and around the Fort Lauderdale area on the 14th. A tornado was reported in a store parking lot in Boynton Beach on the same day. Another round of highs winds was reported across southern portions of the state, as a strong cold front moved through the area on the 16th and 17th. Dense fog (visibilities less than 0.25 miles) was reported on the western side of Lake Okeechobee for three mornings (20th-22nd) in a row. Out of the 161 reports made for the month, 110 came from the storm event that started on February 22nd and ended on the 26th. Multiple heavy rain, storm damage, high wind, and flooding reports came in from the Panhandle and Big Bend regions. One severe thunderstorm produced pea- to golfball-sized hail as it moved east along I-10 between Dowling Park and Jacksonville. Many rivers in the area rose to at or above flood stage, as many locations saw over 8.00” during the 5 day event.

Table 4: Breakdown of storm reports submitted in Florida during the month of February (compiled from Southeast Regional Climate Center).

Agricultural and other climate-related impacts. At the beginning of February, the abnormally dry conditions caused problems for small grain crops that needed moisture to sustain normal growth. Irrigation continued across the state at a steady pace. The above normal temperatures caused many fruit and vegetable crops to mature ahead of schedule. Some portions of the Panhandle received some much-needed rain toward the middle of the month, benefiting the winter wheat crop. Citrus, sugarcane and winter vegetable harvesting continued, while areas that had not received substantial rain were irrigated due to lack of soil moisture. Producers were forced to take freeze protection measures in some portions of the state with a dip in temperatures in the middle of February. Only minimal damage was reported, though strong winds and rains in southern Florida slowed production. Heavy rainfall in the Panhandle at the end of the month helped the developing winter wheat crop but caused flooding concerns as well. Most of the state remained dry, and irrigation was continued in many locations. A freeze caused some damage to potato fields, though no reports of major damage were seen.

Statewide rainfall totals varied greatly across the state during February. Comparing the January 29th release of the drought monitor to the one that was posted on February 26th only tells part of the drought story in Florida. In the first week of the month, additional areas of D1 (moderate drought) were added to coastal portions of Dade, Monroe and Palm Beach counties, while the rest of the state remained unchanged. That area was expanded on the 12th to include all of Monroe County and most of Dade County and was extended north from Palm Beach County into Broward County. By the time the Drought Monitor was posted on the 19th, things had drastically changed. The area of the state that was covered by D1 had expanded from 36% to 72%, and a small area of D3 (extreme drought) had been added along the Florida and Georgia state line. The only parts of the state that remained drought free were portions of Charlotte, Lee, Glades, Highlands, Okeechobee, Indian River, St. Lucie and Martin counties. Things rapidly changed toward the end of February after torrential rains inundated portions of the Panhandle and Big Bend. The rains managed to ease the moderate and severe drought conditions in a lot of the counties in this region. Most of the major rivers are at or above flood stage, and there are reports that wells are coming up as some of this heavy rain makes it into the water table. Despite some of the state receiving the needed rain, the rest of north Florida and the Peninsula are still dealing with drought conditions as we start to transition to the spring dry season.

Figure 2: Drought conditions in Florida as of February 26, 2013 (courtesy of U.S. Drought Monitor). 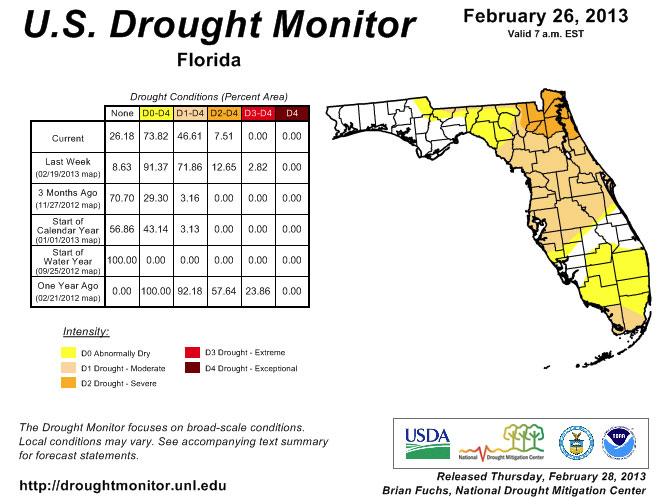 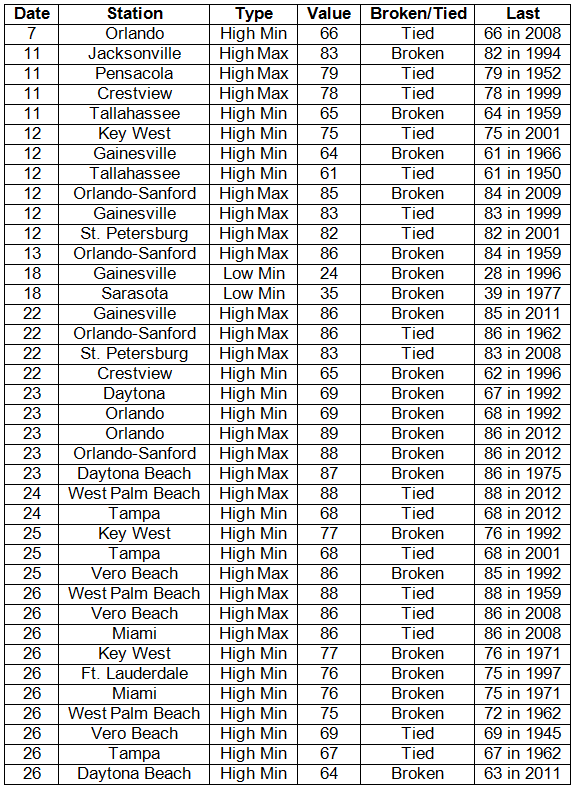