Rainfall totals varied statewide in February. Rainfall totals varied statewide in February (Table 2). Most stations saw below normal rainfall, while some stations saw slightly above normal rainfall for the month. Portions of Holmes, Jackson and Washington counties in the Panhandle saw rainfall totals approximately 3.00” above normal. Heavy rains impacted The Keys and coastal Dade County at the beginning of the month, and the middle of the month brought heavy rains to portions of the Panhandle (Table 3). Areal patterns of monthly rainfall relative to normal are depicted in Figure 1. 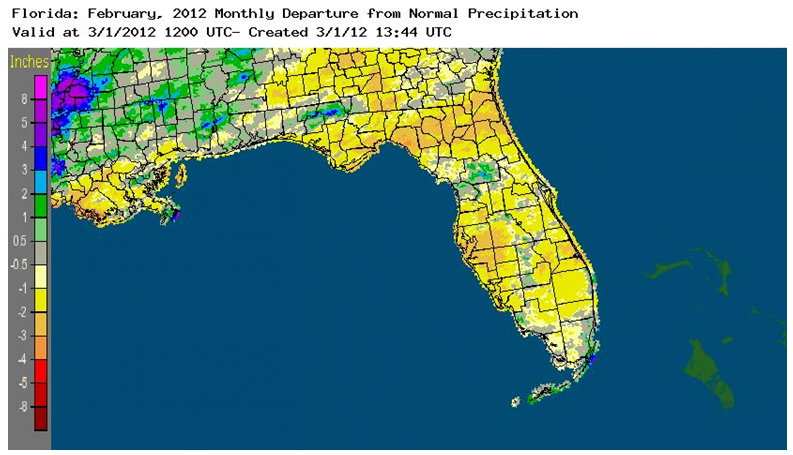 La Niña losing steam in the Pacific Ocean. La Niña conditions have peaked across the equatorial Pacific. Equatorial sea surface temperatures (SST) were at least 0.5˚C below average in the central Pacific, but have warmed considerably across the east-central and eastern Pacific Ocean in the last couple of weeks. The atmospheric circulation anomalies and winds are still consistent with La Niña, but the La Niña is expected to transition to neutral conditions during March-May 2012. The Climate Prediction Center continues to predict warmer than normal temperatures and below normal precipitation through May.

Hazardous weather. A few significant weather events took place in the month of February. On February 18 and 19, a line of strong thunderstorms pushed through the Panhandle and portions of North Florida. Heavy rain was reported in many locations, with some storm spotters across the Panhandle reporting up to 7.00” in localized areas and flood conditions in portions of Holmes and Walton Counties. High winds accompanied the line of storms with wind gusts ranging from 45 mph to 60 mph from a variety of locales, such as Jacksonville, Daytona Beach, Gainesville, Orlando and DeFuniak Springs, while trees were reported down in Marianna and Flagler Beach. A rapidly moving cold front brought high winds to central Florida on the 22nd, with wind gusts up to 50 mph reported in Orlando and Tampa. Another cold front moved through Florida on the 24th, causing downed trees in Tallahassee and Marianna, while the Jacksonville International Airport reported a 40 mph wind gusts as the front passed.

There were a few fires reported during February. A small wildfire in Pasco County forced some homes to be evacuated on the 8th. On the 11th, a wildfire in Hillsborough County caused parts of I-75 to be closed due to low visibility caused by smoke. The No-Go Fire in Brevard County grew to engulf 1800 acres of the St. John’s Wildlife Refuge on the 23rd.

Agricultural and other impacts. Freezing temperatures on the 12th and 13th caused damage to crops in the interior portions of the state. But for the most part, the above average temperatures across the state have aided the development of winter wheat. The episodes of windy conditions throughout the month have helped to deplete topsoil moisture. Fruit orchards and vegetable fields have been frequently irrigated to combat the drought conditions, while trees were also being hedged and topped. Statewide, producers were busy preparing fields for spring planting.

Since the beginning of February, the drought conditions have gotten worse in some areas. The area of extreme drought expanded from just a few counties in the Panhandle to include most of North Florida and the Big Bend region. At one point during February, the National Drought Monitor had Gadsden, Leon, Jackson, Jefferson, Washington, and Calhoun counties under D4 drought designation, signifying an exceptional drought. Rains during the 18th and 19th eased those areas back into an extreme drought classification. The rest of the state has seen below normal precipitation as well, leading to the expansion of severe drought along the Sun and Space Coasts. Even though La Niña is forecasted to transition to neutral conditions during the next three months, current predictions still have most of the southeastern U.S. experiencing warmer than normal temperatures and below normal precipitation.

Figure 2: Drought conditions in Florida as of February 28, 2012 (courtesy of U.S. Drought Monitor). 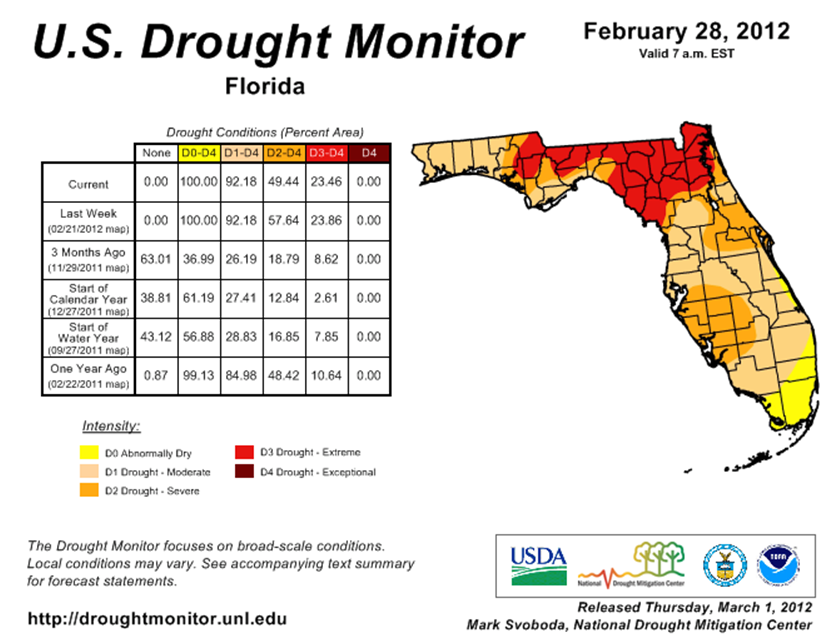 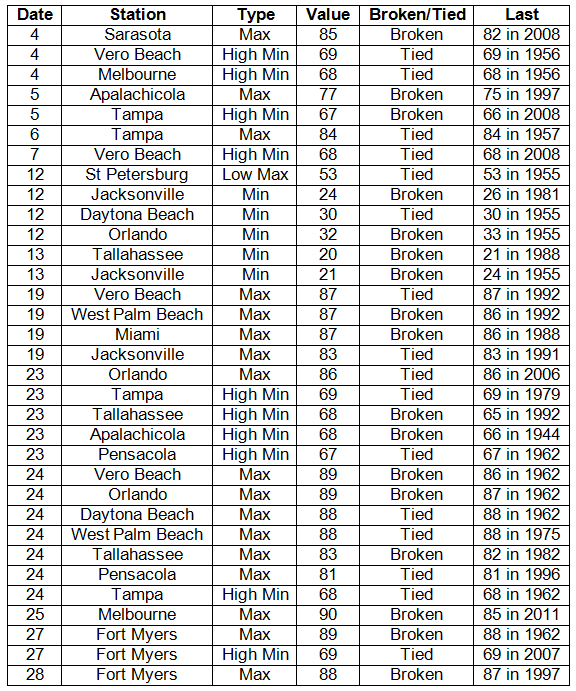